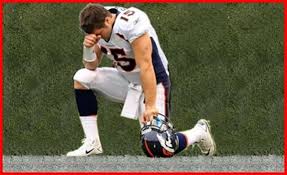 “You think Tony Romo​ has it any different than Tim [Tebow]? I’m just throwing a name out there. It could be anybody. Especially a quarterback. If you don’t win, it’s tough. If you win, you’re the greatest thing going. When you win, you’re the greatest. When you lose, you’re a bum. We’re in a ‘what have you done for me lately’ league.”
John Fox, Broncos coach, Denver Post
GH: Tebow by the numbers;
The Bad
46.4% pass completion rate / next-to-last in NFL
152 passing yard per game / next-to-last in NFL
15 sacks in three starts / last in NFL
43.5% passing on third down / just really shitty

“Welcome to Tebow’s World, where the people living in it either love him, hate him, or love him one week and dislike him the next. And let’s be honest. Love isn’t the problem. Anyone can take a compliment. What hurts is criticism sharp enough to cut through the thickest skin.”Mike Klis, writer, Denver Post
GH: Tebow might be the most polarizing quarterback to play in the NFL since, well, uh…ever. Donovan McNabb was controversial but no one questioned his arm strength or thought he threw worse than Papa John. Manhattan native and former KU QB Bobby Douglass was a big, strong QB for the Bears when I was young and excitable, but even he threw the ball like a quarterback. Tebow is all alone when it comes to a square peg in
the roundest of NFL holes.

“This [Broncos’] season was done with one win under Kyle Orton in early October. Who would have thought they’d be here at this point? You can’t knock what [Tebow] has done. But he is throwing the ball not near anybody at times. I think the coaching staff is behind it. John Elway is the one I’m not sure is. John Elway does believe sooner or later you’re going to have to throw the ball to win in this league.”
Andy Lindahl, Broncos sideline reporter for Denver’s KOA, 810 AM
GH: The Tebow traveling road show shuffles into Arrowhead this Sunday. All those many afternoons that John Elway turned out the lights on the Arrowhead crowd come rushing back to me every time I see those Broncos colors darken our Kansas City skyline. Will Tebow remind us of Elway or Orton? The drama will be fun to watch.

“I think it’s going to be a nail biter. I think Tebow has that will and that determination. He can expose a defense.”
Danan Hughes, former Chief, 610 AM

“No, there’s no way. You’ve got to throw the ball. … I think the Chiefs win this game. I think Denver has a hard time scoring.”
Jayice Pearson, when asked if Tebow any chance of being a successful quarterback in the NFL

“It’s hard to ignore it when it’s everywhere. I try not to pay attention to it, but it still adds a little fuel to the fire.”
Tim Tebow, Denver Post
GH: How hot does Tebow’s fire burn? The man was a self-declared virgin while at Florida so I’m guessing he was burning some rocket fuel in his Gator days. But Tim has a girlfriend now and from the looks of her, he would have to be St. Timothy the Flaccid not to be tapping that end zone regularly.

“I can pretty much guarantee you won’t see me Tebowing or T-boning [during the Broncos game].”
Matt Cassel, after Nate Bukaty described to the Chiefs quarterback how Tebowing differed from T-boning, 810 AM
GH: Let’s hope Cassel and his crew get plenty of chances to forego Tebowing in the end zone. If Tebow does score against the Chiefs, his genuflection is not going to go over well with Weird Wolf and the boys.

“There’s probably no other team that personifies smoke and mirrors more than the Chiefs. The way they played football this year is not indicative of a 4-4 team.”
Danny Clinkscale, 810 AM
GH: Maybe the AFC West should change their name to the Smoke & Mirrors Division. Remember when this division was one of the best in the league? This football is all too often difficult to watch.

“They weren’t physically capable of handling it. … It was clear to me as the game went on that we had a bunch of guys who didn’t have much in the tank. ”
Todd Haley, on the Chiefs having a MNF shortened week to prepare for the winless Dolphins, 810 AM
GH: This might be the sorriest excuse for a young NFL team I have ever heard from a head coach. Not enough in the tank because they had five days to prepare instead of six? That is even more embarrassing than Haley’s hobo beard, gut and lid.

“If you don’t think that was exciting football, than you don’t understand big-man-on-big-man throwback football. That was a classic!”
Tim Brando, who happened to be anchoring the sports desk on ABC during the 9-6 LSU win over Alabama, CBS
GH: What a crock of CBS hyperbole! The Kansas State at Oklahoma State game was the most entertaining game of the week and it was opposite ESPN’s snooze-fest in Tuscaloosa. The more SEC football I watch the more I believe it is a product of shills like Brando. Sure, it’s good but it ain’t special.

“Yeah, if you want to watch an ugly football game… Yeah, I think these are the two best football teams.”
Lou Holtz, when asked if he thought LSU/Alabama should be paired in a rematch for the BCS title, ABC

“This was an ugly game to watch but it was the most physical game of the season.”
Mark May, on the LSU/Alabama game, ABC
GH: May appears to be confusing slow and plodding with the term “physical.” I didn’t see a lot of exceptional SEC speed in this game. When you are not quick enough to get out of the way – you often get hit hard and make loud noises.

“I say this with absolutely no confidence. I won’t be surprised if either team wins this game by 24 points. I’ll pick Mizzou 31-24 but once again, I have no confidence in it.”
Gabe DeArmond, of PowerMizzou.com, on the Longhorns last Big 12 visit to Columbia, 810 AM

“We’re 33% against the spread in the Big 12 this year. We haven’t been able to figure out that conference.”
Paul Bessire, the Prediculator guy from PredictionMachine.com with Soren Petro last week, 810 AM
GH: I have a feeling K-State is one of the reasons why the Prediculator has blown a gasket or two ciphering Big 12 football this season.

“First of all, there are many kids playing there (at Kansas) that I recruited. I dedicated six years of my life to make that program better. I think most people would agree that we left it in much better shape than we found it. I’m just disappointed for the kids that it’s not
going their way.”
Mark Mangino, Sirius Radio
GH: Mangino sounded sad instead of bitter. Read on.

“We did a good job (at KU). We thought we could make it a respectable program and compete once in a while for a conference championship and play in a BCS bowl but that’s not the way it played out unfortunately but that’s the way life works sometimes.”
Mark Mangino, Sirius Radio
GH: Mangino will likely be on a college football sideline next fall. I believe he’ll get a shot as a head coach. It will be interesting to see whether he can get a BCS job or if he’ll be starting over. I’m not a huge fan of Mangino’s but I think he has been humbled. We’ll
see.

“Every job I ever went to I treated it like I was going to be there forever.”
Mark Mangino, Sirius Radio
GH: Kind of like when he visits Cici’s Pizza.

“Baylor should win [the Big 12] by two games with all that talent. But they also have Scott Drew as their coach. He’s a clown. The best word I can use to describe him is he’s a pipsqueak.”
Sam Mellinger, on Baylor’s head basketball coach, 610 AM
GH: Little Scott Drew is the Tim Tebow of Big 12 basketball – but he does his Tebowing out in the hallway during the pregame intros.

“Missouri is a team that is capable of losing to anybody in the Big 12 Conference. This team with Laurence Bowers was at worst an NCAA tournament team. Having lost Laurence Bowers for the season to injury, I now feel like it will be a very successful season if they can get to the tournament.”
Gabe DeArmond, of PowerMizzou.com, on Frank Haith’s first Mizzou basketball team, 810 AM
GH: I have no idea what Mizzou, KU or K-State is going to look like this basketball season. It makes the anticipation for this year all the more delicious.

“I think we should try and play faster because we’re not as skilled from an offensive set.
Which is gonna sound crazy but I think this year we know to go score immediately. Just push it and go get a quick one.”
Bill Self, on his Jayhawks basketball team, 610 AM
GH: Self gives more insight to his thinking on his radio show than any coach in any sport I have ever heard. Read on.

“If it’s not there, we need to be a LOT more patient. We had a lot of really good players (the last few years). It used to be that the go-to guy was the open man. NOW we’re gonna wait, wait, wait, wait, until the right guy touches it.”
Bill Self, 610 AM
GH: Self is simply my favorite coach in big-time NCAA sports.

“I just want to be in Kansas City. I’d rather be comfortable and playing with a team and
players I like. I’d rather be playing for that than the money.”
Alex Gordon, when asked by Soren Petro if he wanted the Royals to sign him to a long-term contract, 810 AM
GH: How many MLB players make this kind of comment in their free-agency year…and mean it? I think Gordon resigns with the Royals for the next five years at $45 million.