OTC: KK Strips Suellentrop Naked, But Bares Some Of His Own Skeletons 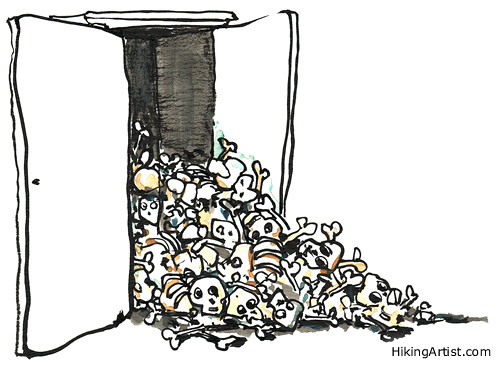 “I got two things I don’t like. I don’t like Wizard of Oz references (about Kansas and Kansas City) and I don’t like it when people tell me my life stinks because I live here. I don’t like it!”
Kevin Kietzman, 810 AM
GH: Kietzman showed his dislike for anti-KC rhetoric when he interviewed Chris Suellentrop on Thursday about his column on Grantland.com that highlighted some of our city’s failings. Kietzman was mean, cutting, nasty and dismissive to Suellentrop – which made the almost 30-minute interview absolutely riveting afternoon-drive-time radio. Read on.

“All I can say is that this line of questioning is proving that Kansas City has an inferiority complex.”
Chris Suellentrop, as Kietzman continue to pepper the editor with backhand head-slapping questions, 810 AM
GH: Suellentrop hit a nerve here with Kietzman. KK hates St. Louis, hates New York and for some unholy reason he hates Nebraska as well. All because he sees the people from those places as thinking they are better off. We got a glimpse under KK’s hood during this interview and it showed a blown hose or two.

“My sister moved to Florida. She thinks the sunshine is better down there or something.”
Kevin Kietzman, 810 AM
GH: KK brought up his sister a couple of times Thursday while talking about people who chose to move away from Kansas City. He has mentioned his sister in the past, who I believe is a Missouri grad, and there always appears to me to be some latent dissention toward his Florida-residing sibling. Despite his many successes as a sports talk radio host, Kevin often seems haunted by what he perceives as people looking down their nose at him. He channeled all that venom toward the ill-prepared Suellentrop. Read on.

“What you just said is a falsehood!”
Chris Suellentrop, during his interview with Kietzman, 810 AM
GH: Kietzman had done his homework and riddled the startled Suellentrop with facts and figures about his newspaper’s declining subscribers and value that may or may not have been accurate. When Suellentrop first attempted to chuckle at this line of questioning, Kietzman only turned the screws with more pressure.

“I don’t think I was trashing my home. … What I was trying to say…”
Chris Suellentrop, to KK, 810 AM
GH: Suellentrop proved to be less adept at verbalizing his message than he was writing it…and his column was a muddled mess that traversed from no NBA team at the Sprint Center to his loneliness as a boy in Olathe to climbing telephone poles. Did JoPo edit this piece?

“I wouldn’t say I regret writing it but, uh, I would say that is the unfairest sentence in the column.”
Chris Suellentrop, to Kietzman on his comment that Hallmark Cards was the only place where a creative person in Kansas City could hope to find employment, 810 AM
GH: I listened to Suellentrop be interviewed by both Kietzman and Nick Wright. In both interviews he spent an inordinate amount of time trying to explain what he meant or backtracking on points he did make. I got the feeling his comments would have been far different if he would have been being interviewed by a Dallas radio station. He was far too apologetic. Write what you believe and then defend it. Maybe Suellentrop skipped that class while he was reluctantly attending grad school at Mizzou.

“The Missouri Tigers are the Washington Generals of ESPN Classic.”
Chris Suellentrop, Grantland.com
GH: Nick Wright asked Suellentrop about this line during his interview with the editor. His response was not all that professional for a journalism major. Read on.

“I do like that line. I knew it would make people mad.”
Chris Suellentrop, in an interview with Nick Wright, on his slam at Mizzou, 610 AM
GH: Suellentrop stated he roots for Missouri in journalism but Kansas in everything else. I’m sure that will soothe the Tiger fans.

“I think my obligation is to my readers and to the truth. And I want to tell the truth and that’s what I did.”
Chris Suellentrop, after Kietzman continued to question him about his harsh comments about Kansas City, 810 AM
GH: I call bullshit here, Chris. Thursday morning, just as a link to Suellentrop’s column was making its way around Twitter and email boxes, he tweeted “Forgive me, Kansas City. I wrote this for @Grantland33.” It is pretty obvious he was well aware of the slur his words would leave on his hometown. I would have preferred he be more of a man about his column and just admit he took a cheap shot at a place he is glad to have in his rearview mirror.

“(The NY Times) has been in 18 years of decline and you take shots at The Kansas City Star?”
Kevin Kietzman, to Suellentrop, 810 AM
GH: Kietzman saved some of his best cuts for Suellentrop’s current employer. It changed Suelly quickly from Clark Kent to Lex Luthor, with no need for a stop at a phone booth.

“It is a national treasure and should be regarded as that!”
Chris Suellentrop, after Kietzman defamed the New York Times by pointing out its shrinking readership and profits, 810 AM
GH: Anyone who has darkened the doorstep of a newspaper building has met out-of-touch idol-worshiping pulp-for-brains dweebs like Suellentrop. After Suellentrop let out this squeal, I was very happy to know he found his way to Mecca and will not be running into me at Arthur Bryant’s.

“I’m sorry to get heated. … Thanks for having me on. I hope I didn’t lose my temper earlier.”
Chris Suellentrop, to KK, 810 AM
GH: I hate when a good radio interview that included some rare genuine passion ends with slobbering from one of the participants.

“To be honest my wife and I talk about (moving back to Kansas City). … It would be pretty great if it did in my opinion.”
Chris Suellentrop, after KK asked him if he could ever see himself moving back to KC, 810 AM
GH: Is Hallmark hiring? KK had poor Suelly so turned around by the end of this interview he was ready to buy a house in Sugar Creek and write for TonysKansasCity.com.

“Sorry for all the drops (during the Suellentrop) interview. We should have had him on a land line…”
Kevin Kietzman, on the poor sound quality from Suellentrop’s cell phone, Twitter
GH: I thought the drops were because Suellentrop was in studio and Leabo was beating him with an old microphone cord.

“I’ve listened to this debate today on both stations…”
Caller Ed, to Kietzman, 810 AM
GH: I listened to both interviews as well. Nick Wright was far more civil to Suellentrop but his questions were well thought out and caused his guest to stammer just as often as he did with Kietzman. The biggest difference was the time the two interviews aired. Wright had him on at 2:20 PM and Kietzman used the first three hours of his show to promote the 5:00 PM interview. Score another one for the veteran talk show guy over the new kid.

“That guy sounded like a moron. He might be a good writer but he’s horrible at explaining what he’s talking about. Everything you disagreed about that he wrote about, he agreed with.”
Caller Joe, to What’s Right With Nick Wright, 610 AM
GH: Suellentrop became a household name at least for this week with his column and radio interviews. But I’m not sure he did his reputation as a journalist on the fast track out of Olathe any favors.

“I think (the Grantland column) sounds more therapeutic for him. I look back at some of the small places I worked at rather fondly. Do I want to go back there? No.”
Day Clinkscale, 810 AM
GH: Suellentrop could have taken a number of different turns to make his point about why Kansas City doesn’t have an NBA franchise. He chose to be a bit mean and paint his memory of his hometown as sad and lonely. I would have written about what a great town Kansas City is and how successful Sprint Center is despite not having an NHL or NBA tenant. But you have to follow your heart when you write. Obviously, Suellentrop’s aorta is passing some vinegar.

“Being a person who lives in Chicago, the perspective of people who live in big cities, their attitude toward Kansas City is accurately reflected in that column.”
Rany Jazayerli, when asked by Kietzman about Chris Suellentrop’s column, 810 AM
GH: So Rany believes Chicago, NY and LA disregard Kansas City because we don’t have an NBA franchise? And I thought it was the fact we are 1,500 miles from an ocean.

“Finally read @suellentrop article about Kansas City that was on Grantland.com. & I thought it was spot on.”
Robert Ford, Royals postgame radio host, Twitter
GH: I have always found it interesting how we humans can read, watch or listen to identical material and come away with completely different takes. It is one of the more appealing aspects of our species.

“The outrage that came back at (Suellentrop) justified his points. My question to you is why do you get so defensive? What got to me is how defensive people got when people should be proud of this city. The arrogance was bad, but the response to it justified a lot of his points.”
Danny Parkins, 610 AM
GH: Suellentrop himself used the term “defensive” to deflect those who criticized his work. While I will agree that Kietzman came off as very defensive before, during and after his interview, I think that is an easy out for guys like Parkins to take. Much of what Suellentrop had to say was just inaccurate. He even said he regretted some of his passages.

“I think Kietzman is super talented. I think he’s a liar and a whore, but I think he’s super talented. He can’t leave (Kansas City) because he owns the station.”
Nick Wright, while discussing why talented and creative people sometimes leave Kansas City. 610 AM
GH: If 610 Sports really is making headway on 810, don’t you think they would ask Wright to step up his game to the level of his education? I can’t think of an easier or less intelligent plan of attack than calling someone a whore. It makes Nick difficult to root for. Nick does the impossible with hits like this – he makes KK a victim.

“If you’re a newspaper writer or radio host or a TV guy and you’re elite – you’re going to go somewhere else. If you’re not, you’re Petro. And if you’re extra untalented, you’re Doug Stewart.”
Nick Wright, 610 AM
GH: And the Kansas City Radio Wars continue…

35 Responses to OTC: KK Strips Suellentrop Naked, But Bares Some Of His Own Skeletons