OTC: Sporting KC Wins The Cup – Or Some Cup / Can KC Soccer Fans Enjoy It W/O The Rest Of Us? 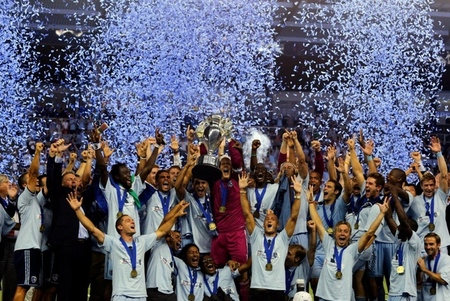 “[Seattle] Sounders FC goalkeeper Michael Gspurning threw his bottle of Gatorade in disgust. How could it end this way? After a wicked storm delayed the match for 41 minutes, after a grueling 120 minutes of tense competition, after drama, frustration and five decisive penalty kicks from each team, history succumbed to anger, confusion and allegations of biased officiating.”
Jerry Brewer, writer, after Sporting Kansas City defeated the Sounders 3-2 on penalty kicks after a 1-1 tie in regulation and 30 minutes of extra time, Seattle Times
GH: Seattle thinks they got robbed. So soccer isn’t all that different from every other sport. I followed the Sounders/SKC title match on 810 [as best I could with that odd-sounding English chap’s accent] and on Twitter. My U-verse connection doesn’t provide me with the obscure GolTV channel where this supposed “major title” was broadcast. ESPN2, FoxSoccer and another sports cable channel were broadcasting soccer matches Wednesday night. None of them thought enough of the Lamar Hunt Trophy match to show it to the rest of America.

“It’s difficult when you’re playing against a team at home, so the crowd helps them, and then when you’re playing against the referee as well, and he makes some absolutely, I thought, ridiculous calls.”
Sigi Schmid, Sounders head coach, Seattle Times
GH: It was reported that Sporting Kansas City paid to get the final match played at home. This is simply another reason as to why I have a hard time considering this a “major” sport. What league or tournament allows you to buy a home title game?

“Schmid can’t help feeling that there was a conspiracy to keep the Sounders from winning the Cup again.”
Jerry Brewer, writer, Seattle Times

“Sounders FC coach Sigi Schmid blamed referee Ricardo Salazar for much of the bitter result. From his opening post-match statement on, Schmid criticized Salazar’s officiating. He was angry over the Sounders receiving five yellow cards to Sporting KC’s zero in a match that was physical on both sides. He was angry about what he considered a phantom handball that resulted in Sporting KC’s goal in the 84th minute. He was angry about Sporting KC midfielder Paulo Nagamura being awarded a do-over during penalty kicks, and about the decision to do the penalty kicks on the rowdy side of the field.”
Jerry Brewer, writer, Seattle Times
GH: Schmid also made not-so-guarded comments in the Times that he thought there was a conspiracy by the Cup officials to keep Seattle from winning a fourth consecutive title. I wonder how Roger Goodell would handle those comments?

“An announced crowd of 18,863 — which probably makes Sounders fans say, ‘Oh, cute!’ — came to see history of a different kind. Sporting KC followers felt it was their time to win the title. They tossed bean bags during a pre-match tailgate and talked trash. It was an intimidating place to attempt the unprecedented [four-peat].”
Jerry Brewer, writer, Seattle Times
GH: Brewer is referring to the 60,000 fans who attended a Sounders game earlier this season. While KC may not have attracted 60K, I was blown away that almost 20,000 fans jammed into LSP on a Wednesday night with a thunderstorm rolling through KCK. The soccer fan in KC is getting his/her due. I suggest they enjoy the hell out of their team, their stadium and quit trying to reform all the naysayers who don’t care about the sport.

“Before the shootout, we had mentioned that to the ref. We watched film, and their goalie likes to cheat a little bit and come out before the shot. That’s something Jimmy told the ref before the shootout and he got caught.”
Matt Besler, Sporting KC player, on the Sounders keeper being called for moving off his line prior to the first penalty kick by Paulo Nagamura, Kansas City Star
GH: This proved to be huge. Nagamura made the re-kick and it sealed the Sounders’ doom. The Seattle keeper, of course, did not agree with the call. Read on.

“Maybe people forget that I’m quick. I didn’t do something bad. I was unlucky.”
Michael Gspurning, Sounders goal keeper, Seattle Times
GH: I recall using this same excuse a number of times when I was a lithe point guard, and unfairly whistled for traveling. The refs never listened to me either.

“How does a team commit an equal amount of fouls as the opponent and one team gets five yellow cards and the other team gets zero? That’s unbelievable to me. The other decision — I don’t know where that came from — is why we took penalty kicks at the other end of the field. I heard that wasn’t the referees’ decision. Apparently, Kansas City got to decide where the penalties were taken. So, what can you say? You sit there and you throw up your hands and go, ‘OK.’ ”
Sigi Schmid, Sounders head coach, Seattle Times
GH: Was SKC really allowed to choose which end of the pitch they would hold the penalty kicks? There is no coin flip to decide this? Soccer just seems to disorganized and chaotic. It’s like they are making up the rules as the match progresses.

“Our ownership group has made a strong commitment — not only to soccer, but the community, facilities and everything.”
Peter Vermes, Sporting KC manager, Kansas City Star
GH: For SKC to win this Cup, whether or not it is a major mid-season award that has nothing to do with their ongoing MLS season, it is a huge lift for a rebranded franchise. I am extremely happy for the soccer fans in Kansas City – even if I do not share in all the excitement.

“Before I came to Kansas City I was a Seattle Sounders supporter. But since then I’ve had a change of heart. I’m very much in the Sporting Kansas City camp.”
TJ Carpenter, new evening sports talk host on 810
GH: How long has Carpenter been in Kansas City? Three months? Four? How do you dump your team just because you moved zip codes? KC fans don’t expect sports talk hosts to convert to become fans of our local teams. What we really don’t want is sports talk hosts who pretend to root for KC-based teams over their favorite teams. Please see Bob Fescoe and his Yankees/Royals make believe.

“It’s very tough for me to ever think that the MLS can ever become even on the level of the NHL. Therefore, it’s really hard for me to put this title on the celebratory level.”
Danny Parkins, 610 AM

“If you’re like me, you don’t care about soccer. Sporting Kansas City’s cup does not make me feel like a winner. There’s a small group of people that enjoy soccer. For them, it’s a title. For the majority of people, it’s not.”
Carrington Harrison, 610 AM
GH: Nate Bukaty has been telling his listening audience that SKC has now delivered Kansas City that title we have longed for. Did the Wizards’ MLS title cause St. Louis Cardinal fans to look at Royals’ fans any differently? I don’t think this Lamar Hunt Cup is going to do much for Royals and Chiefs fans this time around as well.

Software guy who has been writing my Off The Couch column in KC newspapers, publications and websites since 1994. Has been bounced from some of the finest media establishments this side of State Line Road. Dad first and everything else second...and there are a lot of everything elses.
View all posts by Greg Hall →
This entry was posted in Greg Hall OTC and tagged lamar hunt trophy, title game. Bookmark the permalink.

54 Responses to OTC: Sporting KC Wins The Cup – Or Some Cup / Can KC Soccer Fans Enjoy It W/O The Rest Of Us?