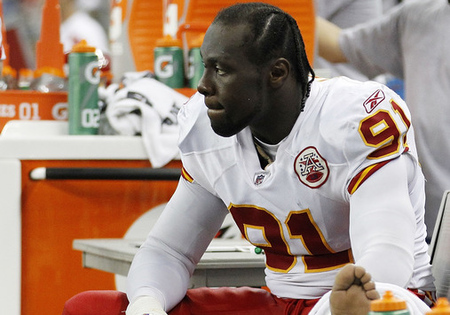 “The Chiefs’ most well-known team player made a rare selfish mistake, and with it put his team in a tough position. … Really, is there another starter that’s less likely to be in the middle of something like this than Tamba? Maybe Derrick Johnson. Possibly Matt Cassel.”
Kent Babb, on Tamba Hali’s one-game suspension due to violating the NFL’s substance abuse policy, Kansas City Star
GH: Hali’s “selfish” mistake will cost him a reported $1.3 million in salary in September and voids a $7.75 million in guaranteed money for next season. That’s more than selfish. That’s just blame dumb. Read on.

“We’re not dealing with Tamba’s personal life here – and I don’t want to. We’re left to speculate as to what he did to miss this game. My bottom line is that he did something wrong and he got suspended. That’s it.”
Steven St. John, 810 AM
GH: St. John said these words as if he dared his cohosts to argue with him. He was defiant in letting his listeners know there would be no personal attacks on Hali. This is simply as example of poor work and bad radio by SSJ. Hali’s personal life was openly discussed on SSJ’s show and all over the national media when it was about his struggles as a child in Africa and how he overcame great odds to graduate from Penn State. So now that Hali proves to have faults his personal life is off limits on WHB? Bullshit.

“Tamba did something incredibly stupid and incredibly selfish. I respect Tamba Hali a lot, but did he screw up here? Oh yeah. Big time. I don’t know who I would have expected this less from. I don’t think we should be easy on him. ”
Kent Babb, 610 AM

“There’s not a player who works harder on that practice field and there’s probably not a better player on that field! To be honest with you, there’s probably not a better guy on that [Chiefs’ team] than Tamba. I’m sure he feels horrible about it.”
Steven St. John, 810 AM
GH: St. John is too much of a fan to critique athletes. He will eviscerate Royals’ players and Chiefs’ players he doesn’t like, but he defiantly refuses negative comments to flow when the topic is a favorite of his. That’s just bad radio.

“There’s just no reason for it anymore. Nowadays, these guys have all the information. They can call the NFL and ask them, ‘How’s this going to affect me?’ I just don’t understand it.”
Richard Baldinger, on Hali getting caught, 610 AM

“His publicist has informed me that Mr. Posnanski is not doing interviews about the book at this point.”
Kevin Kietzman, who said his email and voicemail to Posnanski requesting an interview were not answered by the author of Paterno, 810 AM
GH: What author refuses to grant interviews about his book the week it is released? Read on.

“Those looking for a book about just the scandal will be disappointed, this book is about the life of Joe Paterno and all that it entailed including the scandal.”
J. Gomez, Amazon.com
GH: Gomez gave Paterno the maximum five stars.

“If your intention is to read this book to learn more dirt about Paterno’s role in the Sandusky scandal, you will walk away disappointed.”
Phen Andrews, Amazon.com
GH: Andrews gave Paterno the maximum five stars.

“To be honest folks, there isn’t much new about Joe Paterno, the human, in this book. But, Mr. Posnanski has a way with words to make us realize that Mr. Paterno was a person. He had a mother and a father; his own children, and grandchildren. And then he had his football team, which was his life.”
Raeden Zen, Amazon.com
GH: Zen gave Paterno the maximum five stars.

As a biography, Paterno is spotty at best. Some of the writing is flaccid and marred by bad poetry. … One problem is that Posnanski does not know college football, or at least he doesn’t know much about it before this century. His book is littered with statements about the game that simply are not true. … It’s not enough to say that Posnanski does not do well relating the facts of the Sandusky case and Paterno’s role in it. The truth is that he doesn’t really try.”
Allen Barra, writer for the Wall Street Journal and TheAtlantic.com and is writing a book on Willie Mays and Mickey Mantle, TheAtlantic.com
GH: Barra did not give Paterno five stars. He pretty much ripped Posnanski’s book from the first sentence to his last. You can read Barra’s complete review of Paterno here.

“I feel like I made one of the best decisions of my life! I couldn’t be happier! … A lot of talent [here at USC] and no egos. A lot of talent and no egos.”
Silas Redd, running back, in an interview about his decision to transfer to USC from Penn State, Sirius/XM Channel 91
GH: When I heard Redd repeat his comment about “no egos,” I thought he did so with a purpose. One that he hoped was heard all the way back in Happy Valley.

“Is anything more boring than fantasy football questions from callers on radio? no one else cares about your team.”
Bob Fescoe, @bobfescoe, Twitter
GH: A radio talk show host discussing his fantasy draft, team and league is almost as bad as KK’s grilling segments. I think I prefer the BBQ talk.

“The greatest mistake you’ll make in a fantasy football draft is taking someone who played on your college team. Avoid doing that.”
Darren Rovell, @darrenrovell, Twitter
GH: I thought it was drafting Michael Vick? FF drafts will be popping up in every corner of every burg over the next two weeks. My advice? Steer clear of one Peyton Manning. Read on.

“First time in 6 years I can tell you the positives of this preseason way outweigh the easily correctable bad.”
Bill Maas, @BillMaas, after the Chiefs second preseason game, an ugly loss to the Rams, Twitter
GH: Maas doesn’t seem at all concerned about how the Chiefs’ defense played in that first couple of series in St. Louis. That makes me feel a bit better about the Atlanta game – but not much.

“Wow…I kinda feel sorry for Stanzi… He won’t pull the trigger…looks completely unprepared, skittish…OK that’s enough.”
Danny Clinkscale, @dcwhb, Twitter
GH: I know what Clink means. I too feel sorry for Stanzi when I watch him struggle. He looks to be as outside his comfort zone as any quarterback I can remember. He appears to lack anything that could even be called fake confidence. He needs to move onto the insurance field.

“KU returns 1k tix for KU/KSU game. Ahearn Fund donors can buy til Thurs, then they go on sale to the public.”
Brian Weber, @BrianWeberKSU, Twitter
GH: This is not a good sign for Charlie Weis’ first year. KU has returned a thousand tickets to their rivalry game? I know the battles have been anything but close of late but still… You have to support your squad in this game, don’t you?

“If we don’t get off to a fast start, it could be a very long year.”
Charlie Weis, KSHB TV 41
GH: Charlie looked very serious as he delivered this message. The Big 12 this season is LOADED. Mizzou will not face any stiffer competition in the SEC than what the Big 12 schools will see on a weekly basis.

“3 burgers 3 hotdogs a lot of popcorn and about 8 chicken tenders! I’m living right now haha #Fatlife at the Royals game.”
Greg Brown, @G_B_LOCK5, KU cornerback, while attending KU Day at The K, Twitter
GH: I remember those days – when I could eat like that and still go shirtless. The problem is, I still eat like that.

“Read where Illinois scribe @BobAsmussen voted Michigan No. 1 in AP. Could anyone tell me whether ESPN is blacked out in Champaign?”
Paul Finebaum, @finebaum, Twitter
GH: Listening to Finebaum’s show I get the feeling those in the SEC consider all football in all other conferences to be akin to soccer. I will be pulling for Denard Robinson and his Wolverines against ‘Bama in their opener.

“Congratulations to Darla and Condoleezza. I hope they both accomplish what I did on 11 [at Augusta National], and that’s get an eagle.”
Boone Pickens, @boonepickens, Twitter

Software guy who has been writing my Off The Couch column in KC newspapers, publications and websites since 1994. Has been bounced from some of the finest media establishments this side of State Line Road. Dad first and everything else second...and there are a lot of everything elses.
View all posts by Greg Hall →
This entry was posted in Greg Hall OTC and tagged kansas city star, kid gloves. Bookmark the permalink.