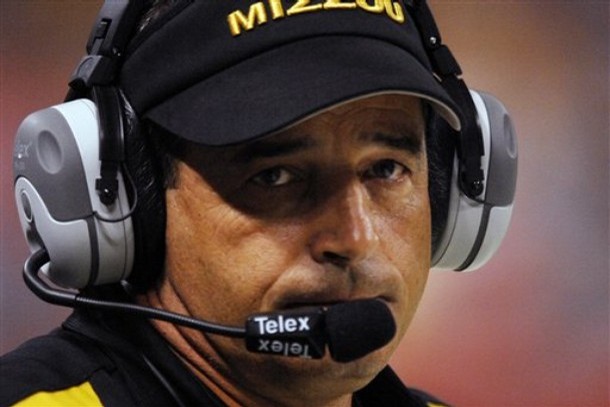 “Looks like the Big 12′s only option [for expansion] is Louisville, which is like going on vacation and having your only option as Louisville.”
Mick Shaffer, @mickshaffer, on Notre Dame heading to the ACC with all their sports except football, Twitter
GH: Mike Golic reported on ESPN Radio Wednesday morning that Notre Dame’s decision came down to the Big 12 and the ACC. He said the Irish opted for the larger media markets on the east coast. Is it all that newsworthy? Not really. ND remains independent in football and very likely will for another 100 years.

“The Big East contends ND must pay $5 million and give 27 months notice.”
Joe Schad, @schadjoe, Twitter
GH: Five million is Futon change to Notre Dame. The 27 months sounds restrictive but only until you reach the bargaining table.

“Everything is perfect [in the Big 12]. The only complaint is the football coaches don’t like playing nine games.”
Kevin Kietzman, 810 AM
GH: I think the Big 12 is in terrific shape, just a year after it looked like Armageddon II would take down the conference for good. If Louisville really is the only viable expansion partner, I think ten teams are plenty. As for the football teams playing a nine-game conference schedule, I don’t know a fan who doesn’t love it.

“Is there anything wrong in renaming this The Southwest Conference? Why is everything ‘Big?’ The name I came up with was ‘The Top Ten.’ ”
Kevin Kietzman, 810 AM
GH: KK needs to stick with naming interns.

“The new [Big 12] logo has to have a gridiron or hash marks or the laces of a football in it. Something football related. That has to happen. Brand this conference!”
Kevin Kietzman, 810 AM
GH: Memo to KU from KK: Stick those Big 12 basketball titles and national championships under a goddamn peach basket!

“I was having a Bud Light this weekend and what’s on the can? The laces of a football! It’s brilliant!”
Kevin Kietzman, 810 AM
GH: It is also seasonal. Beer cans change their graphics with the holidays. BCS conferences like to show  a little more consistency in their logo.

“Trust me, we don’t run a play if we don’t think it’s going to work. … We didn’t fall off a truck here.”
Gary Pinkel, via @Dave_Matter on Twitter
GH: How many people asked Pinkel if he thought the fake punt would work? That’s not the point coach. The fact you thought it would work is! Listening to Pinkel attack the media for asking him about his boneheaded call makes me question the very experience he so readily promotes. Falling off a truck would have been a better excuse than what he’s using.

“Missouri should have beaten the snot out of Georgia. That team can’t score!”
Kevin Kietzman, defending his comments prior to the game that Mizzou should beat Georgia, 810 AM
GH: I have a feeling KK was drinking those Bud Lights during the UGA/MU game.

“No, but I’ve got people in my organization that let me know.”
Gary Pinkel, when asked if he ever has a chance to watch some of his Missouri alumni who are now playing in the NFL, 980 AM
GH: I hated this casual almost flippant response. “People in my organization?” Can you get any more detached and impersonal than that? Pinks is not having a great year behind the wheel of his car or his program. Let’s hope his team doesn’t reflect his personal slide.

“[Dorial] Green-Beckham is a physical freak. He’s fast enough to run past SEC defenders. Strong enough to outfight SEC defenders. Big enough to intimidate SEC defenders. Even in the most dominant conference in the land, there’s no one else like him right now.”
Matt Hayes, writer, SportingNews.com
GH: Hayes’ comments as well as the two that follow were made in August. So where was DBG against Georgia? Is Pinkel saving him to open at Christmas? Did somebody back that truck up and hit him again?

“Pretty much anything deep, really. I hope I’m used on all the deep stuff.”
Dorial Green-Beckham, on how Mizzou can best use his talents in their offense, SportingNews.com

“I haven’t seen any cockiness from him so far, but there’s definitely a kill factor. He’s a real competitor. I definitely think it’s possible for him to be one of the best players in the SEC as a freshman.”
James Franklin, Mizzou’s QB, SportingNews.com
GH: Get this kid on the field, coach. He didn’t come to Mizzou to be an ornament.

“Last year [Kansas State] was doing it with smoke and mirrors. This year they are doing it with bricks and cement.”
Dennis Dodd, on Kansas State football, 810 AM
GH: Love this quote from Dodd. Perfect.

“Arizona State is Missouri’s Rice. They need to just win this game and hang that pelt up on the wall.”
Dennis Dodd, 810 AM
GH: Hate this quote from Dodd. Rice was nobody. Arizona State beat Mizzou last season and ripped Illinois 45-14 last week. The Sun Devils ain’t no Rice. This Pac 12 team is all meat and potatoes. Mizzou needs this win but it will be far from a side dish.

“Well, obviously you have no chance fellas; maybe we just shouldn’t show up. Maybe we just go to brunch on Saturday morning instead. I mean they’ll show up on Saturday; we’ll show up.”
Charlie Weis, on what his message to his KU team is as they prepare as heavy underdogs for their trip to TCU, KUSports.com
GH: Some found Weis’ derisive comments about his team frank and refreshing. I thought Weis sounded foolish and detached. Weis is still acting like an outsider to the KU football program. He appears to me to be still blaming Turner Gill for the product on the field. That could all be accurate. But Turner Gill at least won a couple of games. Will Charlie?

“Well, let me just say this: You’ve lived up to your expectations of competence and mental health.”
Jerry Jones, Dallas Cowboys owner, as Dallas sports talk show host Shan Shariff played “Hail to the Redskins” as Jones joined his show on the radio home of the Cowboys, 105.3 FM Dallas
GH: Good to hear that Shariff is stirring things up down in Dallas. Click here for more.

Software guy who has been writing my Off The Couch column in KC newspapers, publications and websites since 1994. Has been bounced from some of the finest media establishments this side of State Line Road. Dad first and everything else second...and there are a lot of everything elses.
View all posts by Greg Hall →
This entry was posted in Greg Hall OTC and tagged bargaining table, big 12 basketball, shaffer. Bookmark the permalink.