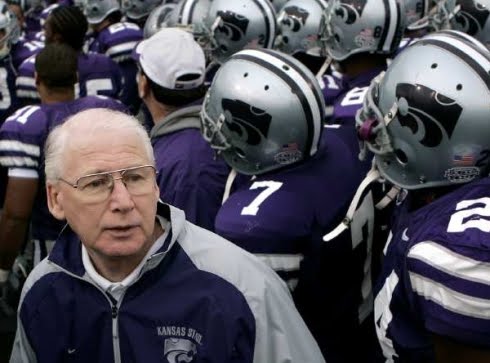 “Wait So We Lead The KU Kstate Football Series 65-39 and BBall Series 183-91… Seems More Like An A$$ Whoopin Than Rivalry.”
Keba Agostinho, KU defensive end, baiting the Jayhawks’ upcoming opponent, [email protected], Twitter
GH: Is Sheldon Richardson rubbing off on the Jayhawks? It takes some real ignorance to throw down the trash talk toward a team that has owned you to the tune of 187-58 for the past four years. Keba is about to get introduced to an “A$$ Whoopin” Bill Snyder style.

“Folks – we are NOT dropping the use of “K-State”! We are simply using Kansas State University more strategically than in the past.”
Kirk H. Schulz, @kstate_pres, in response to reports he has decided to diminish the use of K-State when referring to Kansas State University, Twitter
GH: Why? Why do these academic types want to mess with tradition? What’s next Kirk, set fire to the Wabash Cannonball sheet music? Schulz should back off on banning nicknames and take a remedial English class so he can learn the proper usage of quotations.

“That was the dumbest thing I’ve heard! That guy [Schulz] needs more to do out there.”
Soren Petro, on the K-State nickname controversy, 810 AM

“We have no control over this. @aldoggy2001: @kstate_pres PLEASE tell us that u will stop them from making those stupid OU game shirts!”
Kirk H. Schulz, @kstate_pres, on the commemorative  t-shirts that popped up immediately following KSU’s win over OU, Twitter
GH: I hated seeing these t-shirts. So glad some Wildcat fans feel the same. K-State is a legit football program – time for the t-shirt salesmen to realize that fact.

“Today’s sports page should have been yesterday’s sports page #fail #newspapersdying”
Bob Fescoe, @bobfescoe, Twitter
GH: I assume Fescoe was referring to The Kansas City Star dedicating a large portion of the sports section’s front page to the controversial call that ended the Packers/Seahawks game. Newspapers are so much more than the pulp version that Fescoe was tweeting about. I have noticed that The Star is now posting their sports stories and columns sometimes 12 hours or more before the newspaper hits the streets. Yes, there is a real problem keeping the pulp version of the paper current with today’s social media. But many in the media still depend on the staff at these dailies to feed them their news.

“Fans think they know, but they have no idea what goes into trying to win a game. I don’t know if I could have been able to control myself.”
Jayice Pearson, on the Packers’ loss in Seattle due to a blown call by the replacement referees, 610 AM
GH: When I hear an athlete make a comment like this, I immediately turn the phrase on them. Athletes, coaches, GMs, owners, etc. have no idea what fans go through to be fans. Sure, NFL players spend their week working hard in skull sessions and on the practice field preparing for their next opponent. But the effort and expense a family of four makes to purchase tickets, prepare for their tailgating, the hassle of traffic both to and from the stadium (or even traveling to away games) and dedicating a good six hours or more to game day. All to watch their favorite team. The Green Bay fans are the ones who were robbed. Those guys in Packer uniforms up in Seattle will move on and join another team or community. But that loss will stick with the Cheeseheads for as long as it snows in Wisconsin.

“That was just an outstanding football game. I wish it wouldn’t have been ruined [by the officials].”
Josh Vernier, on the Green Bay/Seattle game, 610 AM
GH: Was it really? I was bored with the poor play by both offenses throughout the game. It would be more accurate to say the officials ruined what was already turd of a game.

“In what will come as a shock to absolutely no one, a study by the Wall Street Journal determined that Chicago White Sox broadcasters Hawk Harrelson and Steve Stone were the most biased in the league… by more than four times the next most homerific broadcast team (Indians announcers Matt Underwood and Rick Manning).”
Joe Lucia, writer, Bloguin.com
GH: PUT IT ON THE BOARD!!… The Royals ranked 16th in the WSJ’s survey. They must have been listening on one of Bob Davis’ days off.

“Aside from the White Sox topping the list, the rest of the top five teams were all small market teams: the Indians, Pirates, Astros, and Marlins. Meanwhile, on the other end of the spectrum, five teams featured no recorded instances of bias in the chosen game: the Yankees, Red Sox, Blue Jays, Mets, and Dodgers. Those are generally large markets and their broadcast teams are thought of highly.”
Joe Lucia, writer, Bloguin.com
GH: The Royals’ radio broadcasts [aside from Davis] are actually pretty objective. Listening to a Royals’ game, there is no doubt that they want the Royals to win [well, maybe not Denny if it is going to cut into his dinner time], but there is really very little overt homerism in a Royals’ radio broadcast – which is how it should be in my opinion.

“Maybe we’ll consider not having Joel [Goldberg] back on again next year. That’s a distinct possibility.”
Soren Petro, responding to a caller who said he was not a fan of Goldberg’s appearances on The Program, 810 AM
GH: Goldberg doesn’t quite fit the homer title but I get the impression he would rather eat Rex Hudler’s baseball before he said anything controversial about the home team. That makes him a very boring interview. I would dump him.

“Everyone has an opinion on who is the best play by play guy in the business. The problem is if your answer isn’t @miketirico you’re wrong.”
Danny Parkins, @DannyParkins, on the MNF play-by-play guy, Twitter
GH: I think Tirico is a pro – at least I did. His act on Monday Night Football the past few weeks has been an embarrassment to broadcasting. His blatant shilling for the referee union and constant verbal attacks on the replacement refs has left me questioning his professionalism.

“The Texas A&M University System plans to spend up to $450 million on renovations to Kyle Field to keep home football games in College Station and wants local government to pitch in $38 million.”
Allen Reed, writer, theeagle.com
GH: Plans are to increase seating at Kyle Field to somewhere between 93,000 and 103,500. These kind of stories make me wonder if I am the only football fan who thinks people going to games is a fading tradition. $450 million for a renovation? Oh yeah, we here in Kansas City are familiar with that kind of a fixer-upper.

Software guy who has been writing my Off The Couch column in KC newspapers, publications and websites since 1994. Has been bounced from some of the finest media establishments this side of State Line Road. Dad first and everything else second...and there are a lot of everything elses.
View all posts by Greg Hall →
This entry was posted in Greg Hall OTC and tagged bill snyder, football program, remedial english class. Bookmark the permalink.