OTC: Kent Babb Talks To The Pitch About The Star, The Washington Post And Haley & Pioli 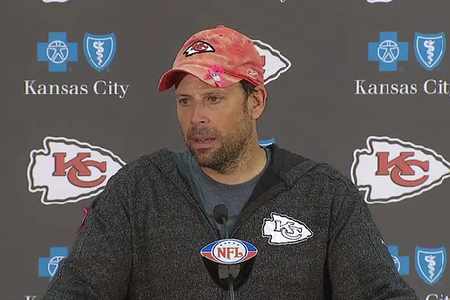 “I’m not sure that I’m not leaving a perfect job for me [as a sports columnist at The Star]. This could be the job that was tailored for me. I think I’m making the right move.”
Kent Babb, in an interview with The Pitch’s Jonathan Bender, on his recent acceptance of a position with the Washington Post as a feature writer, Pitch.com
GH: Jonathan Bender recently posted an interesting and entertaining interview with The Kansas City Star’s Kent Babb at pitch.com. Babb is a young guy who was just promoted from his role as the Chiefs’ beat writer to that of a columnist – which is widely considered about as good as it gets when it comes to newspaper hierarchy. Read on.

“One of my editors approached me back in February and asked if I would be interested in being a columnist. I’m not an idiot, so the answer was ‘of course.’ I’m a pretty opinionated guy on Twitter. I was ready for a change, and it was a heck of a change. I loved the idea of it and the reality of it. One of the challenges in my job was that I had to be an expert in every sport and every team, and I’m not your huge, hardcore sports fan. I like to write. I like sports. I think Sam [Mellinger] really gets into the stats and games, where I’m more of a what’s-going-on-behind-the-scenes guy. I care more about people. Sports fans dream of a weekend that’s nothing but sports. That’s never been my thing. I’m a huge college-football fan. I absolutely go crazy over college football. I’m a fish out of water here where college basketball is such a big deal.”
Kent Babb, Pitch.com
GH: Interesting honesty from Babb on how he views sports. I have never thought it takes a super fan to be a columnist or commentator. Kevin Kietzman follows the games but he is not the stats nerd that Soren Petro and Steven St. John are when it comes to the games. Despite that fact, KK hosts the most highly rated show this city has ever known. Great storytellers make great columnists. Joe Posnanski is one of the best at spinning a written tale. Jason Whitlock writes with more edge and humor, which made his columns a must read in The Star. Mellinger doesn’t have the feel for his audience that I think Whitlock possessed. His topics too often miss the mark. It will be interesting to see if Mellinger is asked to sharpen his keyboard after Babb’s departure.

“I’m 30, and I don’t know what I want to do long term. I think I’d like to be a long-form writer and write for magazines, websites and newspapers. As for columns, I liked it. If somebody offered me a column in the future, this [experience at The Star] wouldn’t stop me from considering that.”
Kent Babb, Pitch.com
GH: Babb had a great gig at The Star as a columnist and feature writer. That combo doesn’t get offered often. But the health of the daily newspaper continues to wane. Odd how the best writers are all moving from newspapers and mags to websites – once considered the bastard of journalism.

“I always liked Todd [Haley]. He’s one of the most regular guys that I’ve covered. And one of the most unfortunate things about the Todd Haley era is that nobody else really saw that. I think he is a lot like you and me — he’s just a regular guy to have a beer with.”
Kent Babb, Pitch.com
GH: I cannot come up with anyone who struck me as more ignorant in how to act in his job place than Todd Haley. The man was handed the opportunity of his life by Scott Pioli and he proceeded to act like a child in protesting his unhappiness with his boss. That always works out well for the employee, doesn’t it?

“One of the saddest things, and the reason [Haley] got fired, is that he had to be a robot. He had to be this bland, boring, completely colorless person during press conferences, and that wasn’t Todd Haley. I do think he went overboard last season trying to be himself. That beard and nasty hat were his way of saying, ‘I’m not your robot anymore.’ … he decided he wouldn’t follow the Chiefs’ insane rules. Professionally, and for sure personally, I’ve never seen anybody spit in the face of a set of rules like that.”
Kent Babb, Pitch.com
GH: So Haley was bland, boring and almost comatose during pressers because he was following the Chiefs’ “insane rules?” I would call his act immature and self-defeating. We have all had bad bosses. I just do not see Pioli as an excuse for Haley to sabotage his career or mismanage the Chiefs.

“I remember I was stunned when [Haley] approached me in the public-relations office. It wasn’t in an interview setting. I was thinking like I have to think in my job. Seconds after he talked to me, I went straight back to my computer. I wrote the lead, basically what was in the paper. It was the craziest thing I’ve ever seen as a reporter. I’ll probably go the rest of my career and not have such a candid moment, a moment like that, especially with an NFL head coach. It exemplified just how far he’d been pushed, that rare moment of being completely naked.”
Kent Babb, Pitch.com
GH: Here is Babb’s lead for his Arrowhead Anxiety story…

“Todd Haley walked into the public relations office at Chiefs headquarters on a Thursday in early December. Four days before he was fired as the team’s coach, he wanted to talk about what life was like inside this organization. But he didn’t know who else might be listening. Looking up toward the ceiling, he darted into a back hallway before hesitating. Then he turned around, going back through a door and stopping again. Haley suspected that many rooms at the team facility were bugged so that team administrators could monitor employees’ conversations. Stopping finally in a conference room, Haley said he believed his personal cellphone, a line he used before being hired by the Chiefs in 2009, had been tampered with. Paranoid? The Chiefs have adamantly denied that they tap phones or listen in on conversations.”
Kent Babb, Kansas City Star
GH: If Babb delivers anything like this on the Nationals or Redskins for The Washington Post, he is going to become a very well-known young writer. How do you think Babb would have handled the Penn State/Paterno/Sandusky story had he been in Posnanski’s position? I hope he someday gets the chance.

“The ‘Arrowhead Anxiety’ piece is way up there for me. Even then, I had no idea it would have the reach and legs it has had. It’s unbelievable how many people have read that story and know what it’s about. ‘Arrowhead Anxiety’ is my gold medalist from my time at The Star. I still feel unbelievably comfortable with the facts of that story. It was a really unique look into what amounts to a $1 billion private company.”
Kent Babb, when asked to name the work he is most proud of, Pitch.com

“I really wish I wasn’t getting out of the Chiefs’ hair. I think they would have given me a lot of material this year. Scott Pioli is the gift that keeps on giving. He can’t not listen. He can’t not read. He can’t not care. I’ve never covered anybody who cares more about what is written about him. Frank Martin is number two. The louder and more often you say you don’t care, the more a lie it is.”
Kent Babb, Pitch.com
GH: How odd that the Chiefs went from King Carl, who had a notorious reputation for monitoring what was said and written about him and his work, to the thin-skinned Pioli. I love this kind of insight from Babb on Pioli and Martin. Love it, wish we got more of it.

Software guy who has been writing my Off The Couch column in KC newspapers, publications and websites since 1994. Has been bounced from some of the finest media establishments this side of State Line Road. Dad first and everything else second...and there are a lot of everything elses.
View all posts by Greg Hall →
This entry was posted in Greg Hall OTC and tagged college basketball, commentator, sports fan. Bookmark the permalink.

13 Responses to OTC: Kent Babb Talks To The Pitch About The Star, The Washington Post And Haley & Pioli