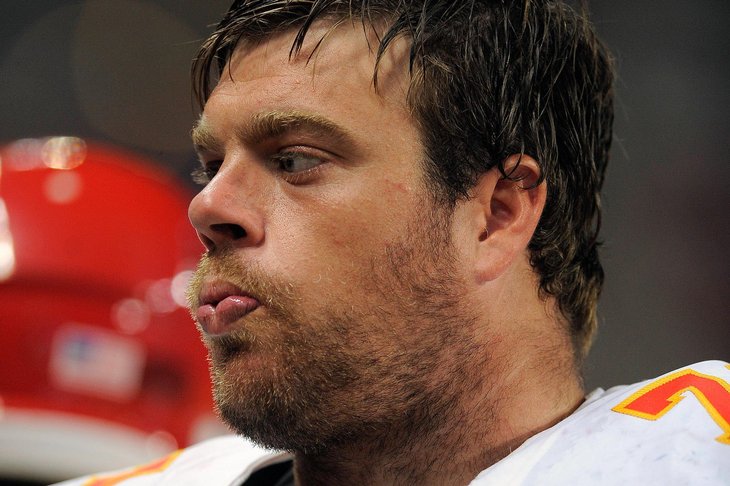 “I stand by what I said. I believe what I said.”
Eric Winston, Chiefs’ offensive tackle, in a tweet sent out Monday night, reaffirming his disgust with the Chiefs’ fans who cheered Matt Cassel’s injury during the Ravens’ game, Twitter
GH: Day two of the Winston Witch Trials didn’t clear much of anything up for the persecuted Chiefs’ fans who Winston trashed with his postgame lecture. Winston met with some of the media after Monday’s practice and backed off from his “70,000” number but little else. Read on.

“I can’t speak to why the fans are upset. If they’re going to be upset, they’re going to be upset.”
Eric Winston, when asked about Chiefs’ fans who are upset with his postgame comments that painted Chiefs’ fans as embarrassing, 810 AM
GH: Winston sounded anything but apologetic in his Monday remarks. He sounded emboldened to my ears. He talked of how much support he has received from people who agreed with him. He sounded a lot like a pampered professional athlete who is completely out of touch with the very fan base who cheer him and his teammates – even when they’re down.

“This was no crime against humanity. This was a frustrated fan base that’s had this quarterback jammed down their throats.”
Jason Whitlock, 610 AM
GH: Whitlock’s column on FoxSports.com read like it was from his golden years here in Kansas City. It was that tight, that true and that good. Read it here.

“The damage has been done. Sometimes you can’t go back and erase that. The national media will not pick up on [Winston’s remarks on Monday stating he didn’t mean all 70,000 fans were cheering Cassel’s injury].”
Jay Binkley, 610 AM

“Jason Whitlock is our ally, folks! He gets it! He gets what we’re going through. People on the national [media] levels don’t understand. They hear one lineman make a comment and think Kansas City is a bunch of losers.”
Bob Fescoe, 610 AM
GH: The way the national media has reported this story is exactly how they should. They are not the bad guys here. They had one of Matt Cassel’s offensive tackles standing in the locker room ripping Chiefs’ fans for what he termed his most embarrassing moment as a professional athlete. The national media ran with this sexy story of a once-storied fan base cheering their injured quarterback as if it had a Tebow slant.

“Can we just stop talking about Eric Winston? When did he become the spokesman for all things Kansas City? Just shut up! I myself, I’m tired of hearing it! … There’s still an arrogant tone in [Winston’s Monday remarks]. It was the wrong guy saying the wrong stuff – because hell, he just got here!”
Jayice Pearson, 610 AM
GH: When the Chiefs first acquired Winston, he looked to me like a high-character guy who could shore up the right side of the offensive line. Now he looks like neither. He is a look-at-me mouth who is more concerned with playing leader than doing his job of protecting the quarterback.

“I am who I am. I probably talk too much but I’ve never been one to bottle it up inside. That’s always been me. When I was 10 – that was me. That’s just something about me. I’m not going to mince words. I’m not going to try and downplay how I feel. If I think something’s wrong, I’m going to tell you I think something’s wrong. … That [cheering Cassel’s injury] was something that I think was pretty pathetic.”
Eric Winston, 810 AM
GH: Winston is all puffy about himself and how he tells it like it is – but he trashes any Chiefs’ fans who think they can shout out their feelings about their quarterback, their team and their franchise. In Winston’s world only his out-of-touch opinions matter.

“I do think it’s silly when fans think they care more than the players.”
Josh Vernier, 610 AM
GH: Who is Josh Vernier and why am I listening to him? The fan base of a professional team is almost always more invested and concerned with the team’s fortunes than the mercenaries who fill out the uniforms each season. Winston has played all of five games as a Chief. I heard a caller on 610 Monday state he’s spent over $300K the past 18 years following the Chiefs. Who do you think cares more about that loss to the Ravens?

“Does Eric Winston really think that people pay $100 to go to a [Chiefs’] game to watch Matt Cassel get knocked out or hurt? That’s not what’s going on! That’s not even close to what’s going on!”
Kevin Kietzman, 810 AM
GH: KK tried desperately to state that no one was cheering Cassel’s injury. I heard Fescoe doing the same. This is simply wrong. Yes, some Chiefs’ fans cheered that Cassel had been hurt. It is their prerogative. It is the culture of professional football. Is it rude? Sure. But professional football is a violent game that promotes mayhem in the stands and revels in it.

“I was on ESPN SportsCenter yesterday…”
Danny Parkins, who then played a recording of his interview on ESPN News, 610 AM
GH: The Winston Witch Trials has made overnight temporary celebrities of almost every Kansas City media person with a Chiefs’ press pass. Even Parkins got his 15 minutes during Monday Night Football.

“Trust me, I’m not apologizing for them…”
Danny Parkins, when asked about the Chiefs’ fans cheering Cassel’s injury, ESPN News
GH: What a strong line from the kid from Chicago. Way to represent, Danny.

“It needs to be said, Kansas City Chiefs’ fans are among the very best in the sport.”
Josh Elliott, reporter, Good Morning America
GH: Not everyone in the national media took Winston’s bait. Bully for those with a brain.

“Matt’s balls are high and behind. Brady’s balls are…”
Jayice Pearson, 610 AM
GH: Pearson’s thought process trailed off after he began to describe Brady’s balls. It either occurred to him how his sentence structure sounded or his cohosts, Jay Binkley and Josh Vernier, started looking at him and pointing. Either way, it was a sound bite made for WHB’s The Border Patrol that will likely never be heard again.

“I think the physical pounding [in the SEC] has taken its toll. When you play South Carolina, when you play Georgia – it’s a little bit different. It’s tough and things don’t look any better this week against Alabama.”
Dennis Dodd, on Missouri being 0-3 in the SEC, 810 AM
GH: If only Charlie Weis’ KU team was playing a smidge better, this complete collapse of Gary Pinkel’s program would be seen as Christmas in Kansas. As it is, it’s merely like Mardi Gras in Lawrence and the rest of the Big 12.

“An embarrassing [Missouri] loss to Vanderbilt when the team was unprepared and outcoached. … The head coach hasn’t been focused and the team hasn’t been focused.”
Steven St. John, 810 AM
GH: Vanderbilt is not as bad as many believe or that Kietzman has portrayed them. But Mizzou has a football program in place that is supposed to win home games of this nature every time. The team looks lost. The team looks uninterested. The team does not look like a team. The team resembles their head coach’s path the last year.

“That loss to Vanderbilt is bad. That’s embarrassing. You don’t want to be that team that everybody in the league circles on their schedule as an automatic win. Everybody’s laughing at you. Everybody’s making fun of you.”
Bob Fescoe, 810 AM
GH: We all know that football team well. In the Big 12 it is Kansas. In the SEC, Missouri is circling that drain with Alabama playing the role of Mr. Clean.

“It wouldn’t have been easy in the Big 12 for Missouri this year either.”
Josh Klingler, 610 AM
GH: This needs to be said. Missouri’s troubles are highlighted because of their move to the SEC but this team would have trouble beating more than two teams in the Big 12. Pinkel needs to get his act together or Mizzou is going to get stuck pay for a lot of stadium renovation plans with empty promises.

“I want to be the only one who is saying this – I don’t see any difference [in Kansas football]. The truth is that Kansas is going to win half as many games as they did last year. They’re no better”
Kevin Kietzman, disputing the opinion of some that the Kansas’ football program looks much better than it did under Turner Gill, 810 AM
GH: I am not the biggest Weis fan but how can you say this KU team isn’t better than last season’s? They went to halftime down 21-14 at Kansas State? In what universe would any of us think Turner’s team could pull that off?

“It’s bad news. It sounds like you’re giving up on the season.”
Jake Gutiérrez, on reports that Charlie Weis had his seniors sit out of Sunday’s practice and worked only with the KU players who will be returning next season, 810 AM
GH: Weis is unconventional and I don’t think he listens to anyone when it comes to football advice. But this move is troubling – especially for those who purchased season tickets.

“I know Weis has said this is not some kind of punishment for the seniors but I wonder if he isn’t trying to find some new leaders for this team. I know he was very upset with the team kind of laying down in the third quarter. He thought the team just kind of cashed it in.”
Nate Bukaty, who serves as the sideline reporter for KU football games, 610 AM

“It’s a great league. They play tremendously entertaining football in the Big 12.”
Mark Packer, morning sports talk host, Sirius XM 91
GH: As a lifelong Big 8/12 fan, I can honestly say the conference has never been more entertaining from top to almost bottom. It is a remarkable story. A conference that was all but blown up a year ago, is now the most entertaining and balanced football conference in the land. Take a bow, Big 12. A deep one.

Software guy who has been writing my Off The Couch column in KC newspapers, publications and websites since 1994. Has been bounced from some of the finest media establishments this side of State Line Road. Dad first and everything else second...and there are a lot of everything elses.
View all posts by Greg Hall →
This entry was posted in Greg Hall OTC and tagged mizzou, professional athlete. Bookmark the permalink.