OTC: Autograph-gate At Peyton’s Place / Do Chiefs’ Care About Losing As Much As Fans? 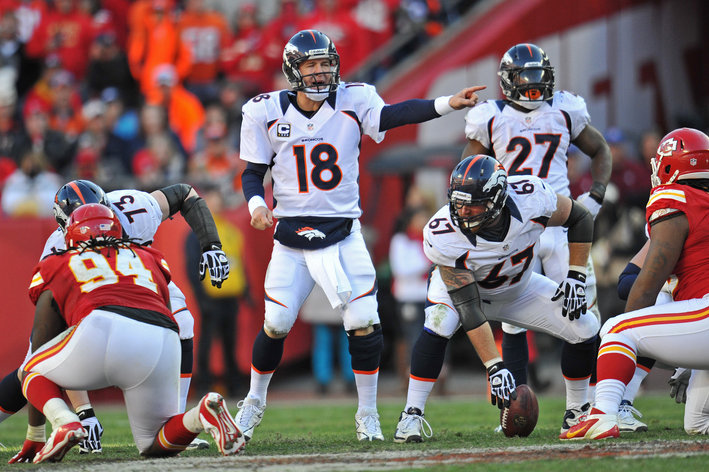 “According to Neal Jones of KCTV-5, Dwayne Bowe also got in on the action [along with Jamaal Charles] and posed for some pictures with [Peyton] Manning following Kansas City’s 17-9 loss to the Broncos. And he actually made some sense. When cameras caught the two Chiefs stars milling around for Manning, it was a goofy bit of video. While Jamaal Charles was clearly embarrassed and tried to play it off like his mom wanted the autograph, Bowe leveled with us.”
Sean Newell, writer, DeadSpin.com
GH: Kudos to KCTV5’s Neal Jones for being in the right place at the right time and recognizing a story as it developed in front of him. Whether or not you think Charles and Bowe asking Manning for autographs and photos is right or wrong, the video and story made the rounds on national media outlets the past few days. Read on.

“It’s a legend, I guess. It’s Peyton Manning. Who wouldn’t want a picture with him? If you had an opportunity, would you take it?”
Dwayne Bowe, responding to Neal Jones’ question as to why he asked to pose with Manning, KCTV5

“It’s nothing, man. After the game, in the parking lot, to take a picture or autographs with your friends? That’s no big deal! That happens all the time. It would be different if it was on the field and you’re in uniform.”
Jayice Pearson, 610 AM
GH: I think it’s embarrassing to show that kind of public adulation for an opponent in your league. Yes, it was after the game and in the parking lot – but it is not something I want my teammates doing after a home loss.

“How is asking for an autograph an hour after the game the same thing as not valuing winning? Jamaal Charles ran for over 100 yards in the game. He appeared to give full effort. The team lost to go 1-10. What’s he supposed to do, dress in black for three days, delete everything except Morrissey off his iPod and sit shiva?”
Chris Chase, writer, USA Today
GH: I wouldn’t expect the sit shiva routine but I do think laughing it up with the opposing QB in front of Chiefs’ fans is a bad signal for members of a 1-10 team that hasn’t won a game at home this year.

“I don’t understand it at that moment. They were smiling and laughing after the loss like that today. I just think it just goes to show what this team’s about. I don’t know if winning’s really that important.”
Richard Baldinger, KCTV5
GH: That is the problem that this kind of innocent act can cause – the perception that losing doesn’t matter.

“To some, it would have been far preferable if Charles and Bowe had spit on Manning while talking about how much they hate Papa John’s, Buick Veranos and older brothers named Cooper.”
Chris Chase, writer, USA Today
GH: Better yet, beat his ass on the field and see if Manning is in the mood for photo ops and autographs an hour after the game. I’m betting he’s not.

“If they wait until after the game, you’re free to do what you want. It’s not really a big deal I don’t think honestly. … I wouldn’t do it. I’ve got too much pride.”
Nick Leckey, former K-State and NFL player, 810 AM
GH: It’s not a big deal until you see a camera man and it hits ESPN and USA Today. Then it’s a big deal. 1-10 is no time to party with the Broncos. It is just another sign to the paying customer that they care far more than the shareholders.

“You lose ever week, but you only get a chance to get a Peyton Manning autograph once in your life.” –Chiefs.”
Chris Kamler, @TheFakeNed, Twitter

“If Peyton Manning was here [in Kansas City] this year, what would this offense look like? It’d be a touchdown machine! They’d be scoring touchdowns right and left!”
Kevin Kietzman, 810 AM
GH: No doubt the Chiefs would be far more competitive with Manning than Cassel and Quinn – but did you notice how much Manning’s arm has deteriorated over the season? His throws look loopy and had no zip at Arrowhead. I don’t remember him throwing one spiral on Sunday. Peyton may have hit a wall that many aging players who sat out the previous season find difficult to climb the last two months of the season. Keep an eye on him the next few weeks.

“I think [Johnny Manziel] may be a little more exciting than RGB to me.”
Jayice Pearson, 610 AM
GH: Whoa. A redshirt freshman being compared to the Redskins’ quarterback for the next decade? That’s deep.

“Can you imagine if Johnny Football was eligible for the draft this year? Chiefs’ fans would be going nuts!”
Jay Binkley, 610 AM
GH: Banners would fly.

“I’m of the opinion you have to grab two quarterbacks in this draft.”
Jay Binkley, 610 AM
GH: Sign Alex Smith and draft a QB with the 33rd pick. Use that number-one pick to get three more picks or grab Notre Dame’s Manti Te’o or Georgia’s Jarvis Jones.

“It’s probably one of the worst years in the last six or seven to be at the top of the draft. It’s the worst quarterback’s class since 2007. Matt Barkley’s the best of the worst. Matt Barkley is six-foot, maybe six-foot-one. His arm strength isn’t anything special. There’s no reason for the Chiefs to reach for a quarterback at number-one this year.”
Sean Zobel, of DraftHeadquarters.com, 610 AM
GH: Let the debate begin. What else do we have to discuss with a team that’s 1-10 and getting Peyton Manning’s autograph?

Software guy who has been writing my Off The Couch column in KC newspapers, publications and websites since 1994. Has been bounced from some of the finest media establishments this side of State Line Road. Dad first and everything else second...and there are a lot of everything elses.
View all posts by Greg Hall →
This entry was posted in Greg Hall OTC and tagged autograph, autographs, newell. Bookmark the permalink.

18 Responses to OTC: Autograph-gate At Peyton’s Place / Do Chiefs’ Care About Losing As Much As Fans?