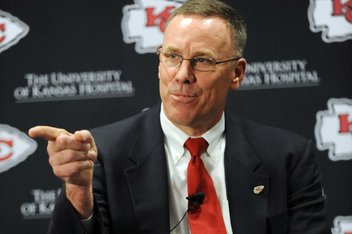 “It’s my dream job. Always has been.”
John Dorsey, on his new position as the Kansas City Chiefs’ GM, 610 AM
GH: After working decades in the Green Bay Packers’ organization, Dorsey revealed to us that this is where he has secretly always wanted to be. Do you believe him?

“I find it hard to believe that someone whose only tie to Kansas City is that his wife went to Kansas has the Chiefs GM job as his dream job.”
Carrington Harrison, 610 AM
GH: Harrison obviously does not believe Dorsey. We don’t know Dorsey well enough yet to know if he is making the politically correct statement here or actually pined for Carl Peterson’s post through the 90s and beyond. I am more interested in how well be performs his job more than how much he wanted his job.

“Who has final say in the draft room? I do.”
John Dorsey, in his inaugural meeting with the Kansas City media, 810 AM
GH: Dorsey put to rest one of the most publicized changes most believed Clark Hunt’s earlier press release revealed – that the Chiefs’ new GM would be on no better than equal footing with Andy Reid when it came to personnel decisions. Dorsey will be calling the shots in the draft room – and he’ll be doing it with a commanding voice. His voice is more reminiscent of Carl Peterson’s boom box than Pioli’s phony politeness.

“Are you an evaluator or a gatherer?”
Bob Gretz, in a question directed to Dorsey, 810 AM
GH: Dorsey’s answer to Gretz was short and cutting. “What does that mean?” he replied. Gretz is now two GMs removed from his benefactor, Peterson. It might be time for Gretz to start hunting and gathering for a real job.

“I like Matt [Flynn]. I think he’s a really nice person…”
John Dorsey, when asked by Kevin Kietzman if he would try and sign Seattle’s back-up quarterback, 810 AM
GH: Sounds like what you hear when your blind date has a great personality. Dorsey and the Packers drafted Flynn out of LSU. Scott Pioli thought he knew Matt Cassel when he paid him $63 million to leave New England. Imagine if Dorsey offers Flynn $63 million to come to KC. When you put it that way, what the hell was Pioli thinking?

“Sam Mellinger wrote a great column in The Star today about how love and barbecue…”
Danny Parkins, 610 AM
GH: Mellinger is a frequent guest on Parkins’ show and a nice guy. But his Tuesday column on how Dorsey and his wife met and their relationship was a snooze. Read on.

“The love story that would change two lives and eventually two NFL franchises began over barbecue. Yes, this is a Kansas City love story from beginning to end. … So, sure. Dinner. Sounds good. John, this is Trish. Trish, John. They smiled. Shook hands. Sat down. Laughed. And that’s when everything changed, because that’s what love does.”
Sam Mellinger, in his Tuesday column on the Chiefs’ new GM and his Kansas City bride, Kansas City Star
GH: Mellinger continues to stub his pen when it comes to picking the must-read topic for his columns. Maybe Sam is trying to expand his readership to include my football-hating wife – at the cost of having his regular readers toss his column aside after his “love story” line.

“This is like a storybook tale or something. It’s unbelievable how this all worked out. It really is. To meet her, and be with her for about five or 10 minutes, you’ll realize it. She’s my best friend, and she’s my closest confidant.”
John Dorsey, Kansas City Star
GH: With the news of the toxicology report on Jovan Belcher’s drunkenness the morning he murdered the mother of his child and then committed suicide, maybe Mellinger and The Star felt it necessary to highlight a love story that appears endearing. I am sure the Chiefs appreciated the gesture.

“You have a lot of friends in the business. But when it comes down to working with somebody, you want somebody who is good at what they do. You have to be able to separate the friendship from that.”
Andy Reid, on his friendship and professional respect for Dorsey, Kansas City Star
GH: So why did Andy Reid name his son, Britt Reid, to his Chiefs’ staff? Now there is a column idea that both my wife and I might read.

“The decision to bring on his son Britt [to Kansas City] will likely raise some eyebrows. Garrett Reid, Andy Reid’s other son, was working with the team’s strength and conditioning coaches when he passed away last year due to an overdose in the Lehigh dorm rooms. Reid has since been criticized by some for bringing Garrett around the team given his history with drugs. Viles of steroids along with needles were found in the room that Garrett was staying in. Both Britt and Garrett were arrested in 2007 due to separate traffic incidents that involved drug charges. Britt has been working on the Temple University football staff.”
Eliot Shorr-Parks, writer, NJ.com

“We didn’t take enough quarterbacks during [Pioli’s] time here. Taking Ricky Stanzi a couple of years ago – okay. Great pick. I think you have to be open to drafting quarterbacks. It’s the most important position on the field.”
Clark Hunt, in an interview with Kevin Kietzman, 810 AM
GH: Stanzi was a great pick? Guys like Clark just don’t get it. He thinks his fan base is gullible, deaf or blind. He didn’t have to verbally filet Stanzi but calling the Stanzi pick “great” is just dumb marketing. It makes all other Clark comments questionable. Kietzman let him make this comment without challenging it. Strike two.

“I wouldn’t mind hearing that, but I know I’m not going to hear that.”
Clark Hunt, after Kietzman asked him how pleased he would be to hear from his scouts that they have identified a quarterback in the draft that was a slam-dunk, no-brainer, top-of-the-draft pick, 810 AM
GH: From a guy who thinks the Stanzi pick was great, this comment means absolutely nothing. That is how KK should have responded to Hunt.

“There’s going to be a lot of fans here in Kansas City watching everything you do over the next few months, John.”
Kevin Kietzman, to the Chiefs new GM, 810 AM
GH: Dorsey’s response to KK? “That’s awesome!”  Let’s just start calling Dorsey “Bizarro Pioli” – he’s the exact opposite.

“The thing could turn quickly.”
Clark Hunt, on the Chiefs’ prospects for improvement, in an interview with Kevin Kietzman, 810 AM
GH: Clark is excited. He thinks he nailed his two biggest hires – and most of the NFL agrees with him. But his most important hire is a starting quarterback. Neither Reid nor Dorsey will suit up on Sundays. Getting the quarterback right isn’t just the most important hire – it might be the only one that really matters in this league.

“Tonight, as he said goodbye after Kansas’ 61-44 win over Baylor, Musburger told ESPN viewers that Holly Rowe ‘was really smokin’ tonight.’ The only thing missing was a smoking jacket and a glass of good Scotch.”
TheBigLead.com
GH: Why involve the facts when they change the direction of your slander? Musburger said “It was really smokin’ tonight.” Unless Holly Rowe is a cousin in the Adam’s Family, I don’t see how that is a reference to her. Trumped up fake “reports” like these makes me question everything I read on TheBigLead.com.

“I’m sticking with it – Kansas will beat K-State by 20 points in Manhattan. They don’t have the horses.”
Aaron Swarts, on the January 22nd game at Bramlage, 810 AM

“I think it’s going to be a great game.”
Kevin Kietzman, who expects far more from his Wildcats than Swarts, 810 AM

“I don’t think Bill Self is a big fan of Bruce Webber. I think he wants to win that game extremely bad.”
Aaron Swarts, 810 AM

“I think Matt Doherty was right.
Danny Clinkscale, agreeing with the former UNC head coach who said Kansas State lacked talent, 810 AM
GH: Set your DVR for this Tuesday night showdown. I am going to bet there will be one or two Bill Self coffins in the crowd at the Octagon of Doom that night.

“They were much tougher than us. They played with more energy and their fans were great.”
Frank Haith, on MU’s loss at Ole Miss, 810 AM
GH: The Ole Miss crowd serenaded the Tigers with chants of “Big 12 rejects.” Mizzou greeted Alabama’s basketball team last week at Mizzou Arena by having the PA congratulate the Tide on their football national championship. How nice of the Tigers. How unlike the Tigers I remember from their Big 12 days. Mizzou was always one of the more feared venues in the Big 12 – especially for KU or Nebraska fans. I understand that MU is somewhat giddy about their new conference – but the SEC doesn’t respect “nice.” They respect winners. The difference in how well A&M is perceived within the SEC with how poorly MU is perceived should concern all Tigers, Antlers and Alums. Time to get that Mizzou nasty on.

“I have never doped. I can say it again … but I’ve said it for seven years. It doesn’t help.”
Lance Armstrong, in a 2005 interview with Larry King
GH: Count me among the many who will avoid Lance’s two-and-a-half-hour interview with Oprah. Lance has stolen enough of my undeserved attention over the past 20 years.

Software guy who has been writing my Off The Couch column in KC newspapers, publications and websites since 1994. Has been bounced from some of the finest media establishments this side of State Line Road. Dad first and everything else second...and there are a lot of everything elses.
View all posts by Greg Hall →
This entry was posted in Greg Hall OTC and tagged andy reid, boom box, evaluator. Bookmark the permalink.