OTC: K-State Gets 2nd Miracle Win In A Row / Mizzou Looking To Play Spoiler In Manhattan 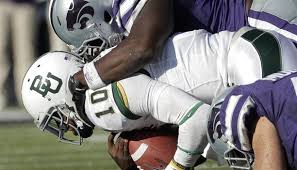 “I guess I am surprised so I guess that makes me one of those dummies.”
Kevin Haskin, writer for the Topeka Capital-Journal, on K-State being 4-0, 610 AM
GH: If thinking Kansas State would enter the Missouri game at 4-0 qualifies you for dummy status, there are not too many smart people following college football – including many of the Wildcat faithful. Following the comments from Cat fans on Twitter during the Baylor game, I got the feeling they were ready to give Robert Griffin III the Heisman and trade Colin Klein for a new silo. But just like in the fairytales, in the
end the tortoise caught the hare. Read on.

“If Robert Griffin throws fastballs, Collin Klein throws changeups. If Griffin is the
next-generation iPod, Klein is the old-school model. Only one of these quarterbacks will appear on Heisman ballots at the end of the season, yet only one is 4-0. Take your pick.”
Austin Meek, writer, Topeka Capital-Journal
GH: RG3 threw five touchdown passes and for 346 yards. He is everything anybody has said about him. Please keep in mind he is doing this at Baylor – the K-State of the Southwest Conference. For KSU to beat Baylor with this future NFL star at the helm makes for one helluva win. The win in Miami was historic for geographical reasons. The win over Baylor means these Cats have a chance to do great things this season in a war-torn conference whose football title just might be up for grabs after this weekend.

“We all just hung together. I can’t emphasize enough how important it was, how fortunate we were to be able to stay together when things looked pretty dark.”
Colin Klein, KSU quarterback, Topeka Capital-Journal
GH: To say things looked dark against Baylor is kind of like saying Highway 24 to Wamego can be tough to see on a moonless November night. Baylor was clobbering Kansas State in a fashion that had even the best of Catbackers throwing in the towel early.

“This one feels like it’s slipping away fast. … What a mess. … Klein can’t throw from pocket at all. … This is rabbit in hat. Not sure how KSU wins this one. BU superior.”
@kkwhb, Twiiter
GH: An assortment of Kevin Kietzman’s tweets as he watched Baylor dominate Kansas State for most of the first three quarters. In fairness to KK, I think his negativity was shared by most Cats fans who were watching this game. It looked that bleak. Makes the win all that more impressive.

“With a two-point lead and 5:30 remaining, Griffin was hit by Ray Kibble and threw a pass that fluttered into the arms of K-State’s Arthur Brown, setting up Anthony Cantele’s go-ahead field goal from 31 yards.”
Austin Meek, Topeka Capital-Journal
GH: This is the play of the game and maybe will be looked back upon as the play of the year – but the right guy is not getting the credit he deserves. Sure, Arthur Brown is a magnificent linebacker and made the interception. But that play does not happen without the hit on RG3 that Ray Kibble delivered. In my best Jack Harry voice; “Uh uh! No way!”

“I think he’s the greatest head coach in college football history.”
Bob Fescoe, on Bill Snyder, 610 AM
GH: Football coaches ride the rollercoaster just like athletes and celebrities. No one was confusing CBS with Knute Rockne (look him up kids) last season when he had KSU struggling to be a .500 team. I think he still has a LOT of work to do in Manhattan when it comes to talent – which makes each win all that more remarkable.

“How can Missouri be a 3 point favorite at anhattan. Cats in both polls, Tigers in neither. It must be Bill Snyder!”
@JackHarryKSHB, Twitter
GH: Mizzou is going to win in Manhattan by two touchdowns or more. Baylor has a great quarterback/receiver combo but little else. Gary Pinkel is bringing a real football team to Bill Snyder Family Stadium. The Cats may have used up their quota of miracles for this season. I think they win no more than two more games…and those two will not be easy. Love what Snyder’s been able to do this season but the team with the most talent
almost always wins the football game.

“How does a conference lose two teams, add a network in FX and still can’t get all five of its games on TV on a given weekend?”
@Dave_Matter, Twitter

“In this day and age, the fact that every (Big 12) conference game is not on television is a failure and embarrassment for this conference.”
Nate Bukaty, on Mizzou’s homecoming game with Iowa State not being televised, 810 AM
GH: The timing of this announcement is critical with the Missouri curators meeting today in St. Louis to determine the fate of Mizzou and their commitment to the Big 12. The Big 12 has never had a feel for how to market or promote itself. A real conference – one with a CEO-like leader – makes sure that the ISU/Mizzou game is televised before that meeting takes place.

“Maybe it’s just baseless Twitter noise, but I’d be very happy for West Virginia if they get into SEC. They belong there more than Mizzou.”
@DanWolken, Twitter
GH: I think it’s noise being promoted by the SEC to let Mizzou know they aren’t coming to this dance with only one partner.

“They haven’t won an outright conference title in 50 years. I’m not saying that derogatorily. It’s just the reality of it. Was 2008 the 500-year flood, when they got to number one in the country? Probably.”
Dennis Dodd, on Mizzou football, 810 AM

“If you’re a Kansas Citian and a Missouri fan, I think it would be devastating to leave this conference.”
Nate Bukaty, 810 AM
GH: I think it is time for Missouri to leave – especially given the incredible opportunities available in the SEC. Every tradition begins somewhere. I think it is time for Missouri to begin forging new rivalries and new traditions with great schools like Alabama, Kentucky, LSU, Georgia, Vanderbilt and the like. Sometimes you outgrow your neighborhood and move up to accept new challenges. That time is now for the Tigers.

“Nobody’s ever going to compare me to Randy Moss.”
T.J. Moe, Mizzou’s WR, when asked by Nick Wright about being another short white wide-receiver compared to the Patriot’s Wes Welker, 610 AM

“I think Kansas’ defense is the worst defense I’ve ever seen at any level of football in my entire life.”
Nick Wright, 610 AM
GH: I flipped on the satellite radio in my rental car Saturday morning in Minneapolis and the familiar voice of Bob Davis informed me the Jayhawks were up 20-0 on the Red Raiders. After a short stop at Dick’s Sporting Goods in Bloomington, the Jayhawks had lost the lead. Tuner Gill is quickly becoming a nice guy who always finishes last.

“Nebraska showed up at its Big Ten christening with its tie askew and an embarrassing stain on its white dress shirt. Unfortunately for the Huskers, a sloppy outing on both sides of the ball resulted in an ugly and disconcerting evening. Wisconsin 48, Nebraska 17.”
Steven Sipple, writer, Lincoln Journal-World
GH: There were not a lot of sympathetic voices for the Huskers’ embarrassing Big
10 debut up in the Twin Cities this past weekend. The morning paper’s headline
asked the Corn if they would like to rethink their decision to join such a burly bunch as the Big 10. It was a royal ass kicking delivered by the Badgers. But here is some bad news for the rest of the Big 10 – NU might be the second best team in that conference. And that’s not real good for primetime TV matchups in October and November. I know I don’t want to see a rematch in December between NU and Wisconsin.

27 Responses to OTC: K-State Gets 2nd Miracle Win In A Row / Mizzou Looking To Play Spoiler In Manhattan