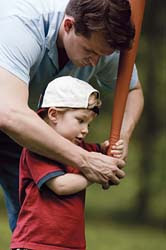 My five-month-old son was strapped into his car seat on a sweltering August afternoon as our car radio announced that baseball was over for the rest of the 1994 season. The MLB Players Union had made good on their threat to strike. I began to wonder what it would be like if the players never returned and the game I and my nine brothers had grown up with died. What would I tell my son ten years hence if he came to me and asked, “Hey dad, what’s this thing called baseball?”

I wrote the following verse to explain to him what the game means to me.

Baseball is grass, chalk and dirt
Displayed the same yet differently
In every park that has ever heard the words, “Play ball!”

Baseball is a passion that that bonds and divides all those who know it.
Baseball is a pair of hands stained with newsprint,
A set of eyes squinting to read a box score,
And a brow creased in an attempt to recreate a three-hour game from an inch-square block of type.

Baseball is the hat I wear to mow the lawn.

Baseball is a simple game of catch
And the never-ending search for the perfect knuckle ball.

Baseball is Willie vs. Mickey,
Gibson vs. Koufax
And Buddy Biancalana against the odds.

Baseball links Kansan and Missourian,
American and Japanese,
But most of all – father and son.

Baseball is the scent of spring,
The unmistakable sound of a double down the line,
And the face of a ten-year-old emerging from a pile of bodies with a worthless yet priceless foul ball.

Baseball is a language of very simple words
That tells unbelievably magic tales.

Baseball is three brothers in the same uniform, on the same team for one brief summer, captured forever in a black and white photo on the table by the couch.

Baseball is a glove on a shelf,
Oiled and tightly wrapped,
Slumbering through the stark winter months.

Baseball is some Elmer’s glue, a couple of finishing nails, a hammer and some black tape,
Lovingly applied in an attempt to coax a few more innings out of a splintered Louisville Slugger.

Baseball is the foreign sensation you get when placing your hand in someone else’s glove.

Baseball is Mark Sawatski swiping his mom’s Oxydol to “chalk” the lines for our neighborhood sandlot game of the week.

Baseball is the smell of a freshly screen-printed jersey,
In the hands of an 11-year-old who just made the team.

Baseball is the way generations compare themselves and their idols.

Baseball is molding the bill of your cap to your own personal specifications.

Baseball is a fifth-grade history class huddled around Sister Irma and her Philco,
On a sunny October afternoon.

Baseball is sitting in your car on a humid summer night,
Listening to the play-by-play on the only radio that will pick up the game. 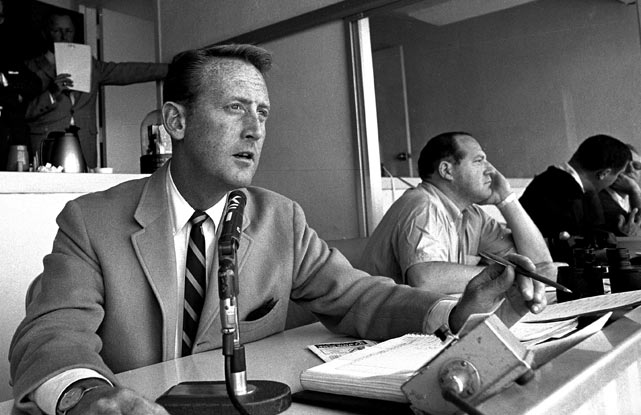 Baseball is a voice in a box,
Describing men you’ve never met,
In a place you’ve never been,
Doing things you’ll never have the chance to do.

Baseball is the potential for a no-hitter with every national anthem.

Baseball is 90 feet of anticipation.

Baseball is my dad hollering score updates upstairs after mom had long ago sent us to bed.

Baseball is the acquired art of extending the life of a hard ball,
With knots, tape and spit,
Until the round rubber center reveals itself and ends the day’s game.

Baseball is a shoestring catch,
A booted ground ball,
And even a Clete Boyer.
But it’s not a game for loafers.

Baseball is the numbing sting of a fastball off the fists of a batter on a cold April night.

Baseball is knowing when to run,
When to stop,
And when to slide.

Baseball is a thinking man’s game that takes no brains to excel at.

Baseball is a tear rolling down the cheek of a child in uniform,
As he watches a thunderstorm wash out the day’s game.

Baseball is a scribbled and blotched scorecard,
That can make 6-4-3 look like a ballet.

Baseball is fireworks at the ball park every Fourth of July.

Baseball is experimenting with the grip of a baseball,
In the hopes of inventing a new and unhittable pitch.

Baseball is pepper, three-flies up, five-hundred and home run derby,
Played by kids in every schoolyard since before Babe Ruth.

Baseball is imitating every nuance of the stance of your favorite player.

Baseball is determining who gets “first-ups” by strangling the neck of a bat.

Baseball is the anguish you feel when a Red Sox gets traded to the Yankees.

Baseball is how I learned my geography.

Baseball is the four-inch-high trophy that I have never thrown away.

Baseball is taught by dads to sons,
In hopes that the boy will master the game that the man did not.

Baseball is a dream that you never really give up on.

11 Responses to Baseball Is…