Off The Couch: MMQB Suggest The Chiefs Are A Mirage / Fescoe Asks If TV Broadcasters Are “White Noise” 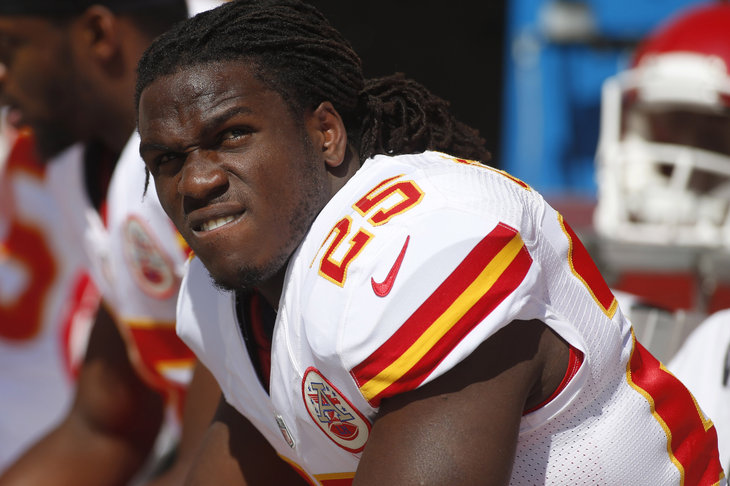 “A win is a win, but another ugly victory in Buffalo begs the question: Are the Kansas City Chiefs really contenders in the AFC? What should we make of the Chiefs? Are they true contenders, or are they pretenders?”
Greg Bedard, MMQB columnist, SI.com
GH: Who in the AFC doesn’t have some ugly wins or visible warts? The Chiefs spanked Tom Brady so hard on MNF that Bill Belichick pulled him out of the game. I think the Chiefs are as real as the Pats. Better yet, why not ask Brady what he thinks?

“Offensively, the Chiefs were outgained (364 to 278), couldn’t convert third downs (3-for-13) and were overwhelmed up front by the Bills’ defensive line. Kansas City, which only had the ball for four plays in the third quarter, had two drives that netted 127 yards. The other 11 gained 151.”
Greg Bedard, MMQB columnist, SI.com
GH: And still managed to find a way to win the game on the road in Buffalo. I find that more of a reason to be impressed with Andy Reid’s bunch than depressed about how it happened.

“This game was more about what the Bills didn’t do—three fumbles, all lost, poor decisions from Doug Marrone and his staff—than what the Chiefs did. And you’re naturally a bit skeptical considering Kansas City’s six wins have come against five teams that are currently out, or on the fringes, of the playoff picture (Dolphins, Chargers, Rams, Jets, Bills). The other win was over the Patriots, who bottomed out on that Monday night but are a completely different team now.”
Greg Bedard, MMQB columnist, SI.com
GH: Wait. The Patriots “bottomed out” on MNF in Kansas City? But they are a “completely different team now?” They might be a completely different team now because they are no longer playing the Chiefs. The Chiefs win over the Pats is simply not getting enough credit. Instead of classifying it as a fluke, it might be the most impressive win this season by an NFL team.

“The offensive line could be the key area for these Chiefs. Outside of center Rodney Hudson, this is not a good group, at least not yet—and that’s taking Sunday’s dismal performance out of the equation. Left tackle Eric Fisher, the first overall pick in 2013, hasn’t come close to living up to that billing, or even the billing of a solid left tackle. Left guard Mike McGlynn and Harris are definition of journeymen with a combined nine teams (10 stints) on their résumés. Fulton, the right guard, is a sixth-round pick. With games against the Seahawks, Broncos, Cardinals and Steelers still to come, the performance of the offensive line will determine whether the Chiefs sink or swim.”
Greg Bedard, MMQB columnist, SI.com
GH: On this point I will agree with Bedard. The Chiefs offensive line looks iffy for a team that expects to advance beyond another first-game playoff loss.

“The real opportunity for the Chiefs will come Nov. 30 when the Broncos come to town. Despite having a dynamic defense with the type of athletes in the secondary to matchup with the Broncos’ many weapons, Kansas City hasn’t come close to slowing down Peyton Manning (66.3 completion percentage, 9.6 yards per attempt, nine touchdowns against two interceptions and 118.8 rating in the three matchups so far). It’s perplexing because, if you were to draw up a defense to give Manning fits, the Chiefs have all the pieces. If Kansas City can knock off the Broncos, that would serve notice that they have arrived as an AFC contender. But right now, they’re not on that level.”
Greg Bedard, MMQB columnist, SI.com
GH: Beating Peyton Manning and the Broncos would be big. The Chiefs have yet to prove they are on the same level as their AFL West rival. A win over Denver would make one heckuva close to the Thanksgiving weekend.

“(The Chiefs) may have two Pro-Bowl players this year. What you have is more of a true team. It’s hard to watch sometimes but they trust the script.”
Jeff Chadiha, NFL writer for ESPN, 810 AM
GH: This is a bit of a no-name a Chiefs team – especially on the defensive side of the ball. This is the kind of team that make rooting for the Chiefs easy. Some of these starters were just a few steps away from joining the fans in the parking lot to tailgate on game day.

“(Solomon) Wilcots’ baffling performance was a reminder that sometimes watching a network telecast of a Bills game leaves one wondering where the announcers get their information and opinions about the Bills. It happened repeatedly Sunday with Wilcots and his on the ball play-by-play man, Spero Dedes. … At times, the analyst’s performance was almost as aggravating as the Bills ability to give away a game that was there for the taking.” Alan Pergament, columnist, on the CBS broadcasters assigned to the Chiefs/Bills game Sunday, Buffalonews.com
GH: Pergament writes a popular column that covers the media aspect of the Bills games each Sunday called “Talkin’ TV.” Click here to read his entertaining work.

“Wilcots might have been the only person at the Ralph more conservative near the end of the game than (Doug) Marrone. The analyst made one of the biggest head-scratching suggestions in recent memory when he said the Bills should kick a field goal inside the Red Zone to close to within 17-16 with a little more than two minutes left and then go for an onside kick.”
Alan Pergament, columnist, Buffalonews.com

“To me it’s all white noise. I don’t pay attention to anything what these guys are saying. I spend a lot of time on Twitter (during the game) seeing what you guys are saying and how fans are reacting to the game. I don’t really zero in on what Spero Dedes and Solomon Wilcots have to say because we’re around the team more than they are.”
Bob Fescoe, on his disinterest in the network broadcasters
GH: I enjoy the broadcasters whether they are competent or not. I do not get as upset as most fans when Joe Buck or Phil Simms or Gary Danielson verbally slights my team. I find it entertaining. It is not that much different than listening to local sports talk radio. Even bad radio can be entertaining radio.

“I like to learn something from the game. I like to walk away from a broadcast and say, ‘Wow, he told me something I didn’t know.’ ”
Josh Klingler, 610 AM

“I think we are so critical of these (network broadcasters). Everybody thinks what these guys do is so easy. They think what WE do is so easy! ‘All you do is talk sports all day!’ I think when people view our jobs everybody thinks they can just sit down and do that. If somebody makes their job looks easy, that means they’re doing a pretty good job at it.” Bob Fescoe, 610 AM
GH: Do people think sports talk radio is easy? I think more believe it is a great gig. The hours are ridiculous. Filling 20 hours a week with live content is a challenge. Not screwing up on live radio five days a week is next to impossible. But in the end, you get to talk sports and not lift anything heavier than pizza and beer. That’s a good gig, Bob.

“I think I can sum up the rest of the (CFB) season in one sentence – Alabama wins the rest of their games and goes to the playoffs. Alabama is the best team in the nation.”
Dennis Dodd, 810 AM
GH: Here is the good news – we get to find out by watching the games. That Thanksgiving weekend slate of games in two weeks is going to dent many a couch beyond repair. Does anybody else change their couch sitting location to avoid their wife’s weekly wrath? A better question – is there a way to avoid a wife’s wrath? I think not. Dent away.

39 Responses to Off The Couch: MMQB Suggest The Chiefs Are A Mirage / Fescoe Asks If TV Broadcasters Are “White Noise”