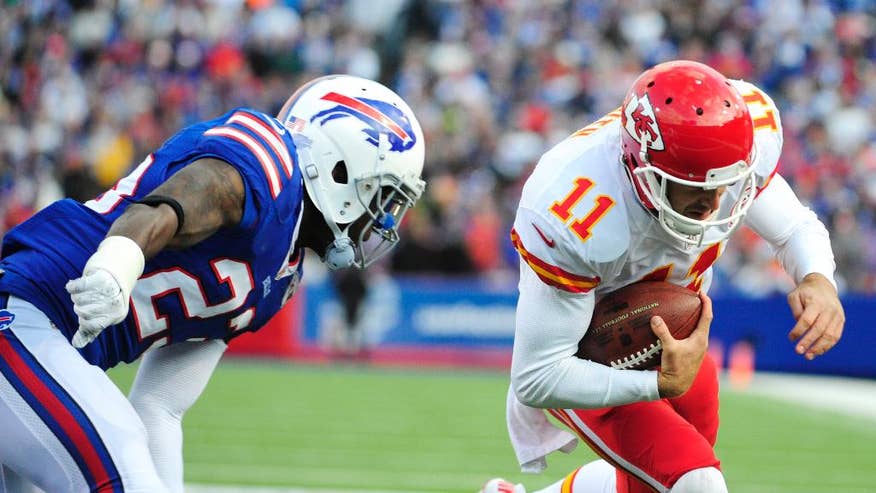 “I think there is something to winning these types of games. You’re not always going to have success. I think these wins are different for sure. There’s a different kind of confidence you get.”
Alex Smith, on the Chiefs 17-13 comeback win at Buffalo,  810 AM
GH: Did this comeback win by the Chiefs remind anyone else of the Royals Wild-Card win over Oakland? The Chiefs looked dead almost from the start and the crowd, the Bills’ stifling front-wall defense gave me almost no hope. But a new breeze is lilting through the Kansas City sports franchises based at the Truman Sports Complex. It has the smell of victory and hope after years of despair.

“Wins like this should make you feel good as a Chiefs fan. Two or three you’ve just got to steal.”
Soren Petro, 810 AM
GH: Okay, this isn’t really much of a quote of note but I agree with Petro that this Chiefs road win is a monster. The Chiefs have been losing these games for far too long. Big Red Andy and our latest San Francisco quarterback import seem to have done something to change that trend.

“It was amazing how negative people were after the first quarter.”
Steven St. John, on the reaction of Chiefs fans on Twitter during the Chiefs game at Buffalo, 810 AM
GH: I didn’t find the negativity amazing at all. It is what we sports fans do – especially we sports fans of perennial losers like the Chiefs and Royals. It might take us a while to see ourselves as winners again.

“Up front, the Chiefs were getting dominated. That looked like it could be a blowout the other way.”
Mark Boerigter, former Chiefs wide receiver, 810 AM

“I think that had a lot to do with some half-time adjustments. They came out the second half and threw in some wrinkles. We hit them with some misdirection in the second half. We were going one way and they were going the other.”
Bill Maas, when asked how the Chiefs were able to turn their offense around in the fourth quarter against the Bills, 610 AM

“To me, that’s a head scratcher. There is usually something behind it. There’s something there. I’m not sure what it is but I think (Donald) Stephenson is a talented, talented player.”
Bill Maas, when asked why the Chiefs are not playing the former starting offensive lineman, 610 AM

“This (Chiefs) team this year is doing a much better job of finishing.”
Steven St. John, 810 AM
GH: It could hardly do worse – especially remembering that playoff fiasco in Indianapolis last January. But winning games by coming from behind was supposed to be something Alex Smith was incapable of doing. Maybe not.

“Andy Reid at 17-8 has the best start that any head coach in the history of the Kansas City Chiefs. I think we just need to accept Andy Reid now to be on track to be the best coach that we’ve had here in Kansas City.”
Bob Fescoe, 610 AM
GH: Leave it to Fescoe to not only get out in front of the horse and buggy but also run down Main Street naked with his twig and berries on fire.

“Bill Snyder says he has seen mostly anger from his players since Saturday. ‘I think they will respond well. That is the key element.’”
Kellis Robinette, @KellisRobinett, Twitter
GH: I don’t understand the anger unless Snyder and KSU think their poor play contributed to their three-touchdown defeat. What I saw was a fast and talented TCU team that just was too good for the Wildcats to keep pace. Kansas State looks to me to be a top 15 team playing with mostly top-50 talent. It is a testament to Snyder’s greatness that the Cats continue to be as highly ranked as they are.

“I’ve said this for years- they need a Kansas guy. Kansas needs a Kansas guy. They need a tough guy. If I was on the search committee I might say, ‘The guy right there right now might be the guy you really need.’ A guy who isn’t blowing smoke and can go out and recruit and has a true love for that university. You’ve got my vote coach.”
Frank Boal, while speaking to Kansas’ interim head football coach, Clint Bowen, 810 AM GH: It is difficult to not root for Bowen to become KU’s next head coach. His interviews reveal a likable regular guy with a sense of humor and humility. I hope he gets the job but it looks to me like TCU, Oklahoma and Kansas State are going to but a spanking on his Jayhawks that might prevent the committee to hold their nose long enough to choose the native son.

“I know why (Brent Venables) doesn’t get a look (for head coaching positions). I can’t say why he doesn’t get a look. You can go ahead and scratch him off the list.”
Kevin Kietzman, after the former K-State and Oklahoma assistant was brought up as a possible KU head-coaching candidate, 810 AM
GH: Interesting comment from KK. He “knows” but he can’t “say?” We know that Kietzman has not been pleased with Venables since he left K-State for Oklahoma. But does he really know something or does he just read the rumor boards like everyone else? And if he does have some facts, what is stopping a sports talk radio host from telling his audience the facts of what he knows?

“If you’re an up-and-coming coach, Kansas is not the entry into coaching that you want. If you fail, you’re done. No up-and-comer at some big program wants to go to Kansas and wind up at Missouri State or Liberty.”
Kevin Kietzman, 810 AM
GH: Kansas is exactly the kind of program that a young up-and-comer coaching prospect should relish. The facilities are excellent and the expectations are about as low as you can get in a big-time conference. I just don’t think Kietzman likes Kansas a whole lot – but he did like Turner Gill being their head guy.

Bob Davis: “The students are preparing to run onto the field”
David Lawrence: “And why not?”
GH: I listened to much of the KU win over Iowa State on the radio and the Jayhawks sounded like a real football team for a change. I was interested in how Davis and Lawrence seemed just fine with the fans storming the playing field – especially since Davis has been a huge grump about this act when it has occurred on the home basketball court of KU opponents.

“It’s embarrassing if you ask me. I could see it if you beat Kansas State and they were in the top ten or something but not Iowa State.”
Mark Boerigter, former Chiefs wide receiver, 810 AM

“KU football is in a completely different place than KU basketball. KU basketball fans don’t ever storm the court because there’s not a win that’s big enough to storm the court. Because they’ve been to the mountain top multiple times. This (KU football) team has been in the dungeon for a long time. Beating Iowa State is a big moment for this football team. That’s a sad statement but that’s the truth.”
Nate Bukaty, 810 AM
GH: There is so much here in Nate’s statement to discuss that I am eagerly awaiting the Comments section that will follow this column. I am guessing that Iowa State has never had the home team storm the field on their football team. That is not a really good place to be no matter what dungeon your football team has inhabited.

104 Responses to OTC: Are The Chiefs Having A Royals Like Season? / K-State Just Isn’t TCU Good / Kansas FB Fans — Really?