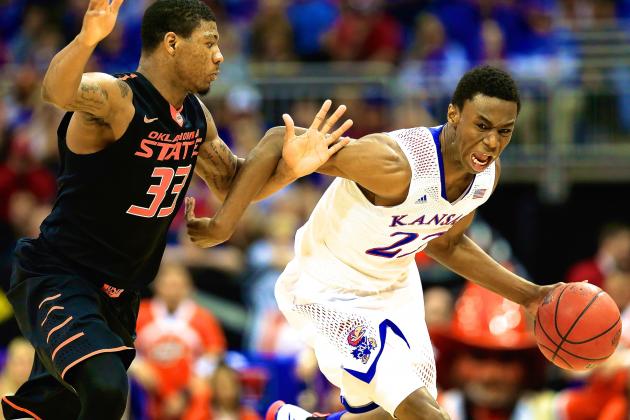 “What a first afternoon of the Big 12 tournament!”
Bill Self, 810 AM
GH: Iowa State’s win over Kansas State was as good a basketball game as I’ve seen this year. The KU overtime win over OSU game was almost as good. And the atmosphere at Sprint Center was just as good as the level of play. Congrats, Kansas City!

“I texted my wife during the Kansas State / Iowa State game and told her what a great game it was. I told her this game reminds me of why I do this.”
Danny Clinkscale, 810 AM

“I wrote about (Andrew) Wiggins for the Friday Oklahoman. You can read that here. He was sensational. I don’t have much else to say, other than whoever gets him in the NBA Draft is going to be very pleased.”
Berry Tramel, columnist, Daily Oklahoman
GH: What a difference in Andrew Wiggins since October. Take a look at his face and body languge in the photo above. He doesn’t even look like the same guy to me. He has evolved from a shy, passive player into the legend he was projected to be last fall. Man do I wish he was sticking around another season to see how much he can grow with another year of college coaching and competition.

“We were living for the moment. It was a great feeling, especially with alley-oop plays. It’s what gets fans more into the game.”
Andrew Wiggins, on KU’s spectacular alley-oops against OSU and the atmosphere at Sprint Center, KUSports.com
GH: “We were living for the moment.” What a great line from a college freshman. Something tells me Wiggins has some N-Dubz on his iPod.

“We didn’t forget that they rushed the court on us at their place. It was definitely a win we wanted.”
Naadir Tharpe, on the Jayhawks inspiration to beat OSU, KUSports.com
GH: So this court-rushing thing doesn’t just bug the Kansas fans, huh?

“Like Le’Bryan (Nash) said, I’m proud of these guys. It’s always hard to beat Kansas, especially in this building. Like he said, they have the fan base to back them up. So, you know, it’s kind of hard. They have that energy and momentum from their fans and it kind of takes the opposing team out of it. But like I said, I’m proud of these guys. We fought to the end. And unfortunately, some plays there we drew up didn’t go right for us. We didn’t convert on them as a team. We let some slip, and Kansas capitalized on the plays that they made.”
Marcus Smart, OSU sophomore guard, Daily Oklahoman
GH: I am one of Smart’s biggest fans in Kansas City. Yes, his exaggerated flops are a joke and he sometimes takes some stupid shots but the guy is a GAMER! When the game started to turn Kansas’ way, just as he did in Stillwater, Smart almost willed his team back on course and made it one to the wire. I will be rooting loudly for Smart and his Cowboys in the NCAA tourney.

“This is the sixth Big 12 Tournament at the Sprint Center. KU has won four of the five. The Jayhawks now are 13-1 in Big 12 Tournaments at the Sprint Center. Those guys have become tough to beat in Kansas City.”
Berry Tramel, columnist, Daily Oklahoman
GH: Only one team besides KU has won the Big 12 tourney at Sprint – yep, Kim English’s SEC-bound Mizzou Tigers beat Baylor for their final title in 2012. The Big 12 tourney is a great one but damn I wish Mizzou was playing in Kansas City this week and not in the empty Georgia Dome.

“Very simple for Missouri: Beat Florida and you’re in. Pretty easy huh? Missouri’s first half vs Florida was their best of the season in my opinion. No way you can pick MU to win but that’s the lone bright spot.”
Carrington Harrison, @cdotharrison, Twitter
GH: Over the years – and I mean back to the 1960s – Missouri’s football teams were known for staging huge upsets. They knocked off top-ranked Notre Dame back when I was still a kid and they handed number-one Nebraska one of their most devastating home losses in 1978. Where would a Mizzou upset win today over number-one Florida rank in Tiger lore? I have to think it would just about rank up there with anything done in the Show-Me State since Quantrill got back to town.

“I don’t think it’s going to be real comfortable at the team picnic at the end of the year with Joel Embiid, Bill Self and his parents.”
Kevin Kietzman, earlier this week, 810 AM

“Yes. I am the fan No. 1 of KU.”
Thomas Embiid, Joel’s father, when asked by LWJ’s Gary Bedore “if he was pleased with KU’s handling of his son’s injury,” KUSports.com
GH: Making up scenarios is never a real smart thing to do but that’s what Kevin Kietzman’s show has become. Looks like that postseason picnic in Lawrence might have a Cameroon soundtrack.

“Yes (Joel) can play before the end of the NCAA. I don’t know if it will take one or two weeks, but I know he will come back soon. He will be back soon. The only thing I can say is he will be back soon. It will not take a long time. It is not serious.”
Thomas Embiid, Joel’s father, in an article written by LWJ’s Gary Bedore, KUSports.com
GH: Maybe Thomas slept at a Holiday Inn Express last night.