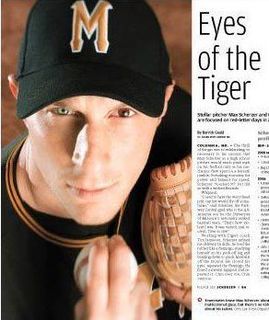 “It could be that he got seven-and-a-half run support per game, too. That’s absurd. Not taking anything away from him… You can’t win those types of awards if everything doesn’t fall in place for you either.”
Billy Butler, in an interview with The Border Patrol Wednesday morning, when asked about facing the 2013 Cy Young Award winner in Max Scherzer today in Detroit, 810 AM
GH: Butler will be a regular guest on The Border Patrol this season and I was impressed with how Steven St. John and Nate Bukaty conducted their interview with the Royals DH. These interviews far too often consist of the hosts fawning over the player and lobbing him safe, cushy questions while the audience falls asleep. Butler took a pretty decent shot at Scherzer and his obscene run support with this comment. Read on.

“(Jason Vargas) very rarely misses his spot. He’s got some of the best command I’ve ever seen. He literally hits them every single time.”
Billy Butler, on the former Angels pitcher and the Royals’ number-two starter and who will be starting Wednesday against Scherzer in Detroit, 810 AM
GH: Vargas is Dayton Moore’s answer for allowing Ervin Santana to free agency. He is another “crafty” lefty who eats innings. He could sure go a long way in endearing himself to Royals fans with a win over Cy Scherzer this afternoon.

“There are ways to score more runs without hitting more home runs. That’s just a stat in general.”
Billy Butler, after Steven St. John asked him if he needed to hit more homers for the Royals to be successful, 810 AM
GH: SSJ asked the tough question here and Butler avoided a direct answer. The Royals can’t afford to play a DH who cannot play the field and only hits 15 homers. Butler obviously thinks he can help the team without hitting dongs. Props to SSJ for asking the question. I wish he would have pushed Butler even more on the subject that is sure to be a hot topic this season if Butler’s power numbers continue to flat line.

“I’ve gotten this far because I’ve got a great approach. I’m not going to change just because they position me different. Having nine guys on defense regardless of how they position themselves, there are just going to be times you hit the ball at ‘em.”
Billy Butler, when asked how he is going to approach his at bats when teams apply a dramatic defensive shift on him to make him hit the opposite way, 810 AM
GH: Butler wants no part of admitting he had an off year at the plate last season. He mentioned that he grades his success by how hard he hits the ball and how many times he gets the barrel of the bat on the ball. Everything else he suggests is just the luck of the game. Some drop. Some get caught. It’s all up to the Baseball gods according to BB.

“I’d rather have that off day in August when we need it.”
Billy Butler, when asked if he would prefer to play the day after the season opener instead of the annual built-in off day, 810 AM
GH: Why MLB forces their teams, players and fans to slam into the windshield after all that opening day momentum each April is a ball scratcher.

“We’re going to win a lot of ball games and it’s going to be a very exciting time here in Kansas City.”
Billy Butler, in an interview
GH: Be Royal.

“You CANNOT do Sweet Caroline! That’s somebody else’s song! They do that out in Boston!”
Henry Lake, discussing the Royals’ song choices to possibly replace Garth’s Friends in Low Places, 610 AM
GH: The Royals announced Tuesday their “Play It Forward” contest to determine the team’s sixth-inning song to possibly replace Garth Brooks’ Friends In Low Places. Click here to view the schedule for these songs that will line up in a 32-song single-elimination bracket. Some of these songs are just ridiculous choices. Lake is dead on about Sweet Caroline – that is the Red Sox anthem and makes KC look dumber than when we were batting Chris Getz lead-off. My Girl by the Temptations? 1999 by Prince? Brown Eyed Girl by Van Morrison? What the hell do these songs have with Kansas City and baseball? Read on.

“Play the song “Kansas City” by Fats Domino. That song everybody knows the words to. To me, it should be something that resonates with the city. To me, there’s no better song.”
Jay Binkley, 610 AM
GH: Done. Who needs a contest? Kansas City by Fats Domino is the winner. Kansas City by The Beatles? This is not cricket! My choice for a distant second place is Journey’s Don’t Stop Believin’. I might roll that one out on nights where the Royals trail going into the bottom of the ninth…along with the video of  Bluto’s speech in Animal House about the German’s bombed Pearl Harbor.

“(Moustakas) is a fragile mental player and he’s going to be tested.”
Todd Leabo, on the Royals third baseman going hitless in the season opener and how he openly displayed his frustration after weakly grounding out in Detroit, 810 AM
GH: I really want Moose to get a hit. This kid deals with failure worse than the cast of HBO’s Girls.

“I think the Royals will struggle to get to the win total they got last year. I think they’ll take a step back.”
Danny Clinkscale, 810 AM
GH: It appears the national media is far more optimistic about the Royals than our local talking heads. That is a bit unusual.

“They’re paying (Alex Gordon) to be a run producer. Not a lead-off guy.”
Brian McRae, on the reasoning behind moving Gordon down into the fifth spot in the order, 810 AM
GH: The Royals are not good enough offensively for Gordon to hit fifth. As an outfielder, I used to hate the teams that stacked the top of their order with their best hitters. It made me dread seeing that lead-off hitter in the on-deck circle. I do not understand a manager who doesn’t want to give his best hitters four or five at bats a game.

“Tiger got in that car and Eldrick came out.”
Carrington Harrison, after Tiger Woods announced he will not be playing in this month’s Masters in Augusta, 610 AM

“(Tiger) has never been the same. He has won zero majors since then. We got a fantastic run from Tiger but it’s over. His body is breaking down. It’s done.”
Carrington Harrison, 610 AM

“(Tiger) was the leading money winner on the PGA Tour last year. He was the player of the year last year.”
Danny Parkins, disputing Harrison’s take that Tiger is done winning majors, 610 AM

“Tiger’s like KU basketball – you have to judge Tiger differently. Tiger said he only cares about majors.”
Carrington Harrison, 610 AM
GH: Tiger change the game of golf like no other golfer in the history of the sport. None. I do not want his reign to be over. I fear it might me.

“I would watch the tourney even if there were no games just for (Clark) Kellogg, (Charles) Barkley and the Jet (Kenny Smith). Great studio show.”
Gabe DeArmond, @GabeDeArmond, Twitter
GH: We hear the word “chemistry” tossed around a lot about locker rooms, news teams, office environments, etc. If you want to see real chemistry in action, watch the NBA guys from TNT work. Kevin Kietzman was attempting to tell us how his radio show is “real” last week. KK wouldn’t know real radio if you introduced him to Marconi. No one on the CBS/TNT set is above anyone else. They are obviously great friends on and off the set. When Barkley sang a tune and then tried to tell them he was known as the Frank Sinatra of the South in Alabama, his cohosts ripped him and hooted him down like he was a freshman punter. And Barkley laughed and enjoyed their taunts. That’s chemistry –something that is all too rare in broadcasting.