OTC: Broncos Get Embarrassed By Seahawks And Peyton’s Legacy Takes A Hard Hit 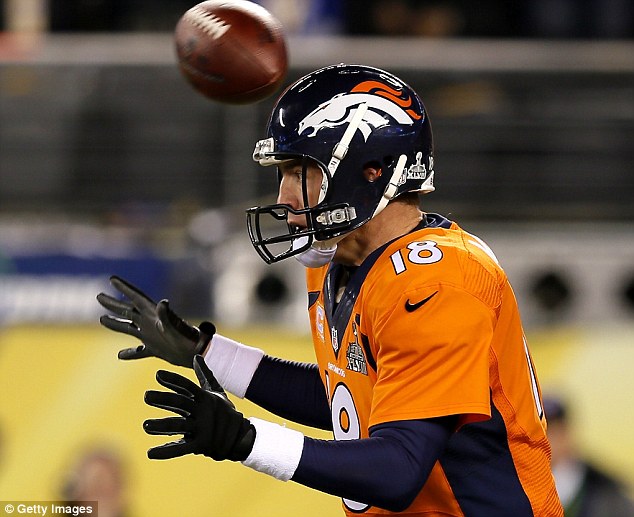 “The Broncos waited 15 years for this? It was not possible for the Broncos to play any worse.”
Woody Paige, columnist, after the Seattle Seahawks destroyed the Denver Broncos in Super Bowl XVIII 43-8, Denver Post

“I think what happened tonight is bad news for Chiefs fans.”
Jack Harry, KSHB TV 41
GH: Mad Jack would probably also find something negative for Chiefs fans if the Broncos had won 43-6. If the Broncos getting blasted in the SB was a bad thing for Chiefs fans, there sure are an awful lot of them who enjoyed every minute of Sunday’s game.

“That was one of the best Super Bowls…ever…I really enjoyed that game.”
Steven St. John, @SSJWHB, Twitter

“I’m so glad this isn’t the Chiefs getting embarrassed. To wait 44 years for THIS would have been too horrible to accept.”
Neal Jones, @NealJoneskctv5, Twitter
GH: I would prefer an ass kicking like the Broncos took on SB48 to the ass kicking the Chiefs took in giving up a 28-point lead in Indy. How do you give up a 28-point lead in the third quarter?

“Peyton’s back next year!”
Bill Maas, @BillMaas, Twitter
GH: I am not sure if Maas meant this as a reason for Chiefs fans to fear or cheer. Peyton is not getting any younger or better. The entire NFL though is going to have to deal with Russell Wilson for the next 12 years.

“Pam Oliver swinging her head like Stevie Wonder and that hair shall NOT be moved…”
Jason Richardson, @JaiRich, Twitter
GH: What in the hell is going on with Pam the Glam? She was flipping her hair and jerking her head around like she was Crackhead Bob. Pam might be in need of an intervention.

“Sorry fans, we don’t have a button for this.”
Buffalo Wild Wings, @BWWings, as the Seattle lead continued to mount, Twitter

“Embarrassing might be an insult to everything the Broncos achieved as they became the first team in league history to score more than 600 points in the regular season, then beat San Diego and New England in the playoffs. But embarrassing is the only way to describe what happened to Manning and the Broncos on the first snap from scrimmage. It is destined to go down as the most embarrassing play in Super Bowl history.”
Mark Kiszla, columnist, Denver Post
GH: How embarrassing was the Broncos loss to Broncos fans? One die-hard Bronco fan showed up at work today in my office sporting a Chiefs sweatshirt.

“As much as it hurt to be humiliated by a 43-8 loss to Seattle in the Super Bowl, the pain will be nothing compared to the heat Manning will take for flopping on football’s biggest stage. The Broncos were so bad Sunday, the sun might be embarrassed to show its face in Colorado.”
Mark Kiszla, columnist, Denver Post
GH: Fair or not, Peyton’s legacy will forever be tainted with his monumental failures in the Super Bowl. Yes, he has one SB win but so do a number of average QBs. This one might be the last one we remember him by and it was fugly!

“We were on a national stage, in the biggest game in America. And to come out and play like that?”
Eric Decker, Broncos wide-receiver, Denver Post
GH: Decker knows it was embarrassing even if Peyton does not. Denver was abused and physically manhandled by a superior team. This was not a case of Denver playing poorly but more of Seattle dictating how this game would be played.

“The Broncos were dominated by the first rule of the playground: Athletes stay. Losers walk. No amount of intelligence or creativity can overcome a clear and decisive difference in speed and strength. … A year ago, a stunning loss to Baltimore in the playoffs gave the Broncos a sense of purpose and a motto: Unfinished business. This loss to Seattle was worse. It shouted: As now constructed, the Broncos are not good enough to win it all.”
Mark Kiszla, columnist, Denver Post

“This (fourth Denver loss in a Super Bowl) is the most excruciating, though. The difference between the others and Super Bowl No. 48 was the ‘most prolific offense’ in NFL history played like the ‘most offensive team’ in Super Bowl history in a game regarded as a tossup.
Woody Paige, columnist, Denver Post
GH: Denver’s offense totaled some record stats this season but were they really better than Dick Vermeil’s Greatest Show On Turf in St. Louis? I would still rank Kurt Warner’s bunch as the best NFL offense I ever saw.

“They haven’t played a defense that flies around like we do, that hits like we do.”
Bobby Wagner, Seahawks linebacker, Denver Post
GH: I LOVED the way the Seahawks tackled. They were physical, they were fundamentally sound and they were ball hawks. Did you catch Byron Maxwell punch the football from the grasp of Demaryius Thomas while making the tackle? Beautiful defensive football.

“Peyton’s still the greatest quarterback to ever play the game. This doesn’t destroy his legacy.”
Michael Bennett, defensive end, ESPN.com
GH: The debate will live on as long as the game is played as to who is/was the greatest QB. Peyton’s play Sunday diminished his chances of being that guy. I would still favor Tom Brady as the best. Joe Montana ain’t far behind.

“The drought is over, Seattle. You don’t have to endure ridicule about your city’s rampant losing anymore. You don’t have to expect the worst even when your teams are at their best. You don’t have to sneer about being overlooked or underappreciated. The Seahawks have delivered the city’s first championship since 1979 in one of the Big Four sports leagues (NBA, NFL, NHL, MLB). Thirty-five years of suffering, of outlasting mediocrity and mismanagement and misfortune, knelt at the feet of this team. The Seahawks didn’t just win a championship. They yanked the Lombardi Trophy away from the Broncos. They lived up to their preseason promise to leave no doubt this season. “
Jerry Brewer, columnist, Seattle Times
GH: Just reading these words should give Chiefs and Royals fans hope. Seems like hope is all we ever get though.

“The Seahawks won a Lombardi Trophy with the worst pass offense in Super Bowl history (26th in NFL).”
Rick Gosselin, @RickGosselinDMN, Twitter
GH: So maybe the Chiefs don’t need to draft the next Geno Smith?

“(Super Bowl MVP) Malcolm Smith didn’t even get invited to the scouting combine. Something to keep in mind during the wall-to-wall coverage later this month.”
Bart Hubbuch, @HubbuchNYP, Twitter

“46 players in the Super Bowl were UNRANKED or 2 STARS coming out of high school, keep working make your dream reality! Best tweet I’ve seen.”
@Elmore2014, Twitter
GH: Greatness has a way of hiding itself until it is evident to us all.

“The commercials sucked.”
Just about everybody on Twitter
GH: I liked the Radio Shack ad but I don’t know what people under the age of 35 thought of all those strangers. I was really disappointed in the Seinfeld ad because George looked like hell and he somehow has forgotten how to act. What were your winners and losers?

42 Responses to OTC: Broncos Get Embarrassed By Seahawks And Peyton’s Legacy Takes A Hard Hit