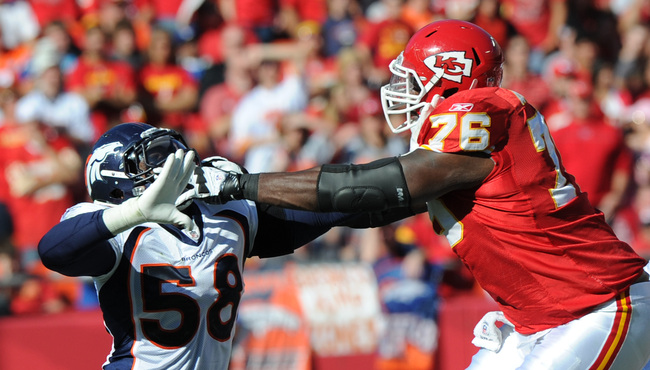 “Mark my words, write it down. The Chiefs are not going on the road and making it to the Super Bowl! They are not that kind of team! They HAVE to play at home! I have zero hope that the Chiefs are the one seed! Zero!”
Kevin Kietzman, last week in another attack on Andy Reid’s in-game decisions, 810 AM
GH: How bold is it to write down a team that was 2-14 last season isn’t going to the Super Bowl this year? Not very. I am going to guess KK didn’t have the Phillip Rivers-led Chargers winning in Denver Thursday night either. Strange things happen in sports and none more strange than what happens in the NFL.

“Do not consider this a prediction, but the longheld theory here is that if the Chargers are ever to win a Super Bowl, they’ll have to do it is an underdog and probably a heavy underdog. San Diego’s foremost sports teams shouldn’t be allowed to just march to any title, given how ridiculously gorgeous the weather and scenery are here. Something starkly opposite is what it’ll take. A blemish-laden jaunt to the playoffs no one saw coming, say. All told, enough luck to make a leprechaun blush.”
Tom Krasovic, columnist, utsandiego.com
GH: I love this excerpt from Krasovic’s column. Just a great piece of sports writing in my book.

“Mike McCoy, Mr. Milquetoast, went conservative at end. Got bailed out by a turnover. Props to Chargers, who are better than Chiefs.”
Mark Kiszla, @markkiszla, Twitter
GH: Kiszla just loves to poke at Chiefs fans. Even when we aren’t a part of the game.

“It’s all just in the will to win, to help us win! Where else would you want to be on a Thursday night than in Denver Colorado playing the Denver Broncos with 53 of your favorite buddies? It’s awesome!”
Phillip Rivers, in an bolo-tie-wearing, animated and energetic postgame interview on the NFL Network
GH: If you stayed with the TNF game’s postgame coverage, you got to see a version of Phillip Rivers that I did not know existed. What a fun frenetic freak this guy is! He made Deion and Michael Irvin look and sound like choirboys.

“I’ve seen Philip Rivers play twice in person…the 2003 Tangerine Bowl against KU, and Sunday against the Chiefs.  In those two games, he’s thrown for 13 yards short of a half mile and 8 TDs.  I’ve seen several QBs two or more times in person, and the only one to top Rivers’ yardage was Asheiki Preston—who I watched for two seasons at KU.”
Reader Matt, OTC email

“I go hide someplace because those people know what I look like.”
Len Dawson, on the Chiefs playing at Oakland this Sunday, 810 AM
GH: Imagine being Lenny Dawson at the Oakland Coliseum. This is the guy, along with the late Ben Davidson, who is the reason for the long, storied Chiefs/Raiders rivalry. It’s pretty cool that we still have a living piece of that history still walking amongst us.

“I think this is a guy who is going to continue to get better. I think he has a lot of upside.”
Bill Maas, on Donald Stephenson’s play at left tackle, 610 AM
GH: Are the Chiefs better without Branden Albert in the lineup? The offensive production sure has taken off with the second-year Stephenson anchoring the left side.

“First of all…any shock that Albert is (injured) on the field again…he gives us a pee break every game.”
Danny Clinkscale, @dcwhb, during a recent Chiefs game, Twitter

“(Stephenson) has gotten better every chance that he has had to play. You forget that he’s a second-year player. You’re going to have some ups and downs with him. We understand that, (he’s a) young guy. He’s talented. He’s trying every day to get better.”
Andy Reid, Kansas City Star

“Covering media, at this point there’s almost not a day that goes by where somebody isn’t saying something spectacularly stupid on the air. That said, upon seeing the clip (of Jack Harry) in my opinion it’s very hard not to believe he used the word ‘Gayhawks.’”
Richard Deitsch, SI.com media columnist, in an interview with Bob Fescoe, 610 AM

“It’s pretty rare that I read stuff that comes back to me on Twitter. Most of it’s bad. I’m not going to spend my whole life reading things from mean people on Twitter.”
Kevin Kietzman, citing some tweets to him who said his fall on the ice Friday morning was an act of karma for supporting Jack Harry over “GayhawksGate,” 810 AM

“Twitter is a cesspool of negativity.”
Bob Fescoe, 610 AM
GH: I find Twitter absolutely delightful and informative. Are there some Jackmunches on there? Sure, but they add to the ambiance as well. How hard is it to scroll past a tweet?

“If you’re not going to play Nebraska, there’s no other team in the Big Ten that I’d rather play than Michigan.”
Stan Weber, on K-State’s bowl opponent, 810 AM
GH: I think a lot of KSU and NU fans were hoping for these two old Big 8 foes to get paired in the Holiday Bowl. Michigan will be a good test and a great win for KSU if they get it. Nebraska gets a repeat of last year’s foe with another bout against Georgia. I saw a tweet from the SEC that showed 49 states picked Georgia to win that one.

“Earmuffs kids…”
Steven St. John, 810 AM
GH: I am one of the last guys to be offended by what is said on the radio – but SSJ’s “earmuff” news stories are almost always channel turners for me. Not because they’re crude but rather they’re stupid. Am I asking too much of my morning radio personalities to use wit to entertain rather than tit?