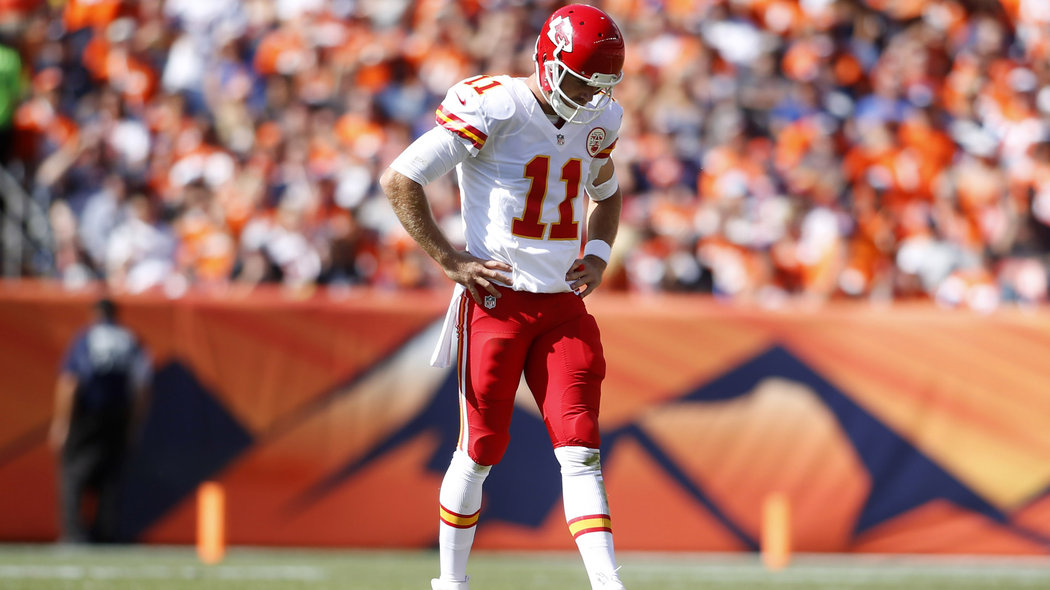 “I was really proud of the way the Chiefs play, considering who they didn’t have. I thought they put up a pretty good fight considering they had one hand tied behind their back and on one leg.”
Brad Fanning, TV sports anchor for KCTV 5, 610 AM
GH: I felt the same way as Fanning did about the Chiefs effort in Denver, Yes, this is the NFL and we don’t give out medals just for showing up – but I was expecting Peyton Manning and the Broncos to treat the Chiefs like they were the Kansas Jayhawks (more on that club’s effort at Duke later). This was not only a competitive game but one the Chiefs almost pulled out. As Maximus asked, I was definitely entertained…and in the end that is a lot of the reason I show up to watch each week.

“They played a heckuva football game. … I thought that might have been the best game (Alex Smith) has played since he’s been in Kansas City.”
Len Dawson, on the Chiefs effort in Denver, 810 AM
GH: After week one when Smith looked like he might be Matt Cassel II, he looked every bit like the QB with which the Chiefs can build a winner. I just wish John Dorsey would get the guy a few receivers who someone might want to start on their FF team.

“How much grit and guts is Alex Smith showing here?”
Mitch Holthus, as Smith battled the Broncos with his arm and legs, Chiefs Radio Network

“Denver could have had five or six sacks but Alex Smith was able to escape.”
Nick Lecky, former NFL offensive lineman, 810 AM
GH: As well as Smith played, the Chiefs new placekicker did not. Read on.

(Cario) Santos didn’t show any of this during training camp or the preseason.”
Mitch Holthus, after the Chiefs rookie kicker missed a 38-yard FG after the Chiefs fashioned a XX play drive, Chiefs Radio Network
GH: Why Holthus thought he need to inject this comment immediately after Santos blew a chip shot field goal that ripped the heart out of the Chiefs’ third-quarter drive was puzzling. But not really. Holthus sees his job as one to protect the image of the players, coaches and franchise. Even screw ups like Santos who deserve to be ripped like they were a Raider.

“Don’t say his name. You know how I feel about that person.”
Tim Grunhard, after a caller almost mentioned Lin Elliott in comparing him to Carlos, 810 AM

“There’s no question the guy can kick. There’s just a question of which way it’s going to go.”
Len Dawson, on the Chiefs rookie place kicker Cario Santos, 810 AM
GH: This is one of my favorite quotes of the week. Thank you, Lenny.

“I feel for Mitch Holthus and Suzy Bling Bling and all those people who show up at that Monday night radio shop. Mitch’s grandkids are going to have to open up that book!” Caller to Chiefs postgame show, on Holthus’ tradition of talking about the heretically sealed book that he will not open until the next Chiefs’ playoff victory, 810 AM

“Deb is here tonight! Double D, Dangerous Deb is here!”
Mitch Holthus, running down the names of the attendees at his Chiefs Kingdom radio show Monday night at Nick & Jake’s, 810 AM GH: Mitch made me think twice about altering my route home and heading over to N&J’s to meet those Double Ds. BTW, was that the theme music for Friday Night Lights I heard in the bumper music for Mitch’s radio show? I started dreaming of driving through West Texas just hearing those familiar chords.

“I hate to even say this but I’m hearing the word ‘Achilles.’”
Kendall Gammon, reporting on Jamaal Charles after he left the game Broncos’ favoring his leg, Chiefs Radio Network
GH: Gannon’s report proved to be incorrect as we now know that Charles was diagnosed with a high ankle sprain. But was he wrong to report it might be an Achilles? Read on.

“I heard the sideline reporter, Tracy Atkins, said (Charles injury) was an Achilles. I thought that was a little irresponsible. Again, I didn’t see the report. Based on what happened last week with the Chiefs when two guys go done with ruptured Achilles, you’re going to go on the air and say that it’s an Achilles? When it turns out to be a high-ankle sprain? You can’t say it! You can’t say it if you don’t know! She said it could be an Achilles because he was pointing toward it. Isn’t that what she said?”
Brad Fanning, TV sports anchor for KCTV 5, 610 AM

“We don’t know where that originated from though, Brad. That’s the reason I’m not going to call her on the carpet for it. She in no way shape or form said that was what the injury is.”
Henry Lake, responding to Fanning’s comments above, 610 AM
GH: I caught most of the Chiefs/Broncos game on the radio so I did not hear the TV network’s sideline reporter say that Charles might have injured his Achilles. But let’s assume she did, as did the Chiefs Radio Network sideline reporter, Gammon. What’s the big deal about reporting what you heard someone affiliated with the team say about an injury – even if it proves to be wrong? The sideline reporter’s role is not to be a journalist in the sense they have the time or resources to vet every bit of info they come across. They have seconds to deliver updated information on the players, coaches and teams from the sideline and that might mean we the consumer have to understand this isn’t going through an editor before it hits live TV. I don’t have a problem with the erroneous Achilles reports unless Gammon and Atkins just made them up. And since they both reported the same injury, that would indicate they both had a reliable source for the information.

“Jim Nantz came into that game looking for nice things to say about Eric Fisher. ‘Boy, if his shoes are tied right I’m going to tell people!’”
Steven St. John, on the glowing comments by Nantz and Phil Simms about the Chiefs top draft pick from a year ago, 810 AM
GH: I guess we have to remember that the NFL is really nothing more than a very exclusive private men’s club of 32 owners who’s ultimate goal is to make gobs of money. They pretty much control everything from the players to the media covering them. It’s not how it’s supposed to be but it’s how it is.

“To me, (Eric Fisher) looks like a guy who is getting better.”
Terez Paylor, Chiefs beat writer for The Kansas City Star, after watching the Chiefs’ second-year offensive tackle’s play in Denver,  610 AM
GH: I still have hope that if Fisher ever gets his shoulders healthy he is going to be a great player for the next decade. But I also thought Lake Dawson was going to be a stud.

“I don’t do many tricks before the snap but I try and give them all they can handle after the snap.”
Dontari Poe, Chiefs nose tackle, when asked by Mitch Holthus if he tries to spit on the ball or move it to disrupt the opposing center, 810 AM
GH: Poe might be my favorite Chiefs player. Have you heard his McDonald’s radio ad? It is fantastic! And he emphasizes the MAC when he says McDonald’s, just like they do down on Prospect Ave. BTW, Billy Butler might be the worst radio ad reader in Kansas City right now. He sounds like he read that copy as he was walking out of the recording studio. Put some effort into it, Billy! Better yet, call Poe for some pointers.

“It’s crazy to look at this week (in Miami) as a must win already but I was calling week one a must win!”
Henry Lake, 610 AM

“I think if (the Chiefs) get to six or seven wins this season you feel happy that there was some progress made in some areas.”
Jay Binkley, 610 AM

“I saw the Green Bay Packers lose 17 players the year they won the Super Bowl. They had people going down left and right.”
Jeff Chadiha, of ESPN.com, refusing to allow the Chiefs to use their recent rash of key injuries as an excuse for failure this season, 810 AM
GH: I like Chadiha’s approach. NFL teams deal with injuries all the time and find a way to compete. The Chiefs cannot just fold up and quit before October. Injuries should not be lethal. I guess we’ll see how good Dorsey and Reid are at their jobs.

“Well, there’s a chance we might ease (D’Anthony Thomas) back into things this week and see how things go.”
Andy Reid, on whether or not the rookie out of Oregon will be activated and play against Miami, 810 AM
GH: After watching Darren Sproles light up Indianapolis, I am very eager to see this Oregon Duck quack for the Chiefs.

“I wish I played with Darren Sproles! Wow is he something!”
Rich Gannon, @RichGannon12, Twitter
GH: Is there a higher compliment from one pro to another than to wish you were a teammate? We were lucky here in Kansas City to watch “Tank” as a kid grow into the NFL star he has become. What a great venue for the 10-year veteran Sproles to go off on Monday night. He remains the greatest high school player I ever saw play – and one of the most underrated college and NFL players of our lifetime. Sproles is that good.

“We suck. That’s as blunt as I can put it. For whatever reason. Defensively we just won’t stop people, especially early in games. Every drive, every first drive, their team is able to go and get points and today it happened all day. Offensively we put the ball on the ground. We had opportunities and we didn’t capitalize on them. Collectively, we look bad. It’s frustrating because everything that everybody says about you, we’re making them right. It’s almost as if you allow others to write your story. And we’re not going out there and doing anything about it. That’s hard. I’m really embarrassed.”
Charles Woodson, after the Raiders dropped a 30-14 home game to Houston, silverandblackpride.com
GH: I thought I would leave you with something to smile about.