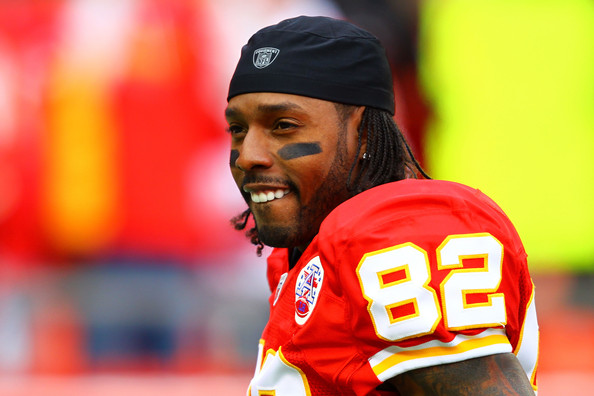 “The people close around me and my team and the organization know I had nothing to do with that (marijuana arrest). I was being profiled. It will all come to light in February. It wasn’t a distraction (to the Chiefs) because my teammates know and my family knows. Like I said, I was being watched and being followed.”
Dwayne Bowe, in an interview with WHB’s The Border Patrol and former Chiefs wide receiver Eddie Kennison, 810 AM
GH: The Riverside police cited Bowe for driving 48 mph in a 35 mph zone. During the arrest they discovered Bowe’s wallet contained his driver’s license and Marijuana. Read a news report about the arrest from last November below.

“While questioning the driver, the officer detected a strong odor of marijuana from inside of the vehicle. The (Riverside) officer then requested the driver and two passengers to get out of the vehicle. Once out of the vehicle the officer explained to the driver, who owned the vehicle, that he was a K-9 Officer and that the dog would alert to an illegal substance. Subsequently, inside of a black bag the officer discovered the wallet of the driver and vehicle owner, Dwayne L. Bowe, and two containers that had 6.6 grams and 3.8 grams respectively of what is believed to be marijuana in them. Bowe was then placed under arrest for the possession of a controlled substance. The K-9 alerted to a black backpack and inside of that was found a container that had 4.2 grams of what is believed to be marijuana in it.”
Fox4KC.com, news report on Bowe’s arrest in November 2013
GH: I don’t know if Bowe was “profiled” or “being watched and followed” because he was a black man driving an Audi in Riverside around midnight. Maybe the Riverside cops were waiting in the weeds for him…but that’s kind of what the police do, Dwayne. They set up speed traps to issue tickets to keep their streets safe and add to their city coffers. Unless the cops put the dope in your billfold and vehicle, you’re complaint should be directed at the mirror.

“If (Bowe) thought he was profiled before, wait until the cops hear that interview. I think the cops are going to be real interested in stopping Dwayne Bowe after that interview.”
Jeff Chadiha, NFL writer for EPSN, 810 AM

“I’m going to work out more on my work ethic. I’m going to get quicker and faster. I want to be one of those speedy quick guys.”
Dwayne Bowe, when asked his plans for the off-season, 810 AM
GH: Bowe said he would also like to lose five pounds and get down to about 208. He said he needs to work on his stamina because he was so tired at the end of the playoff game in Indianapolis. Looking for the Riverside Sonic at midnight is not the best route to achieving those goals, Dwayne.

“Having a fun time watching all of these WR’s for the upcoming NFL Draft…awesome group!”
Daniel Jeremiah, @MoveTheSticks, Twitter
GH: I’ve seen some mock drafts that have the Chiefs targeting a speedy quick wide receiver with their first pick. Apparently Bowe has as well.

“It’s a different environment.”
John Sundvold, on the difference in covering SEC basketball compared to the Big 12, 810 AM
GH: I have yet to warn to watching many SEC basketball games that don’t involve Missouri, Kentucky of Florida. I do have to say I may need to add Arkansas home games to that list – especially after the Hogs overtime thriller win over Kentucky Tuesday night. Suuuuueeee!

“If KU wins Saturday, the Big 12 is over.”
Carrington Harrison, on KU playing Oklahoma State at Allen Fieldhouse, 610 AM
GH: Harrison isn’t the only one thinking this is a possibility just two weeks into the Big 12 basketball season. Kansas has looked that good since their upset loss at home to San Diego State on January 5th. Just ten days ago we were asking, “What’s wrong with Kansas?” Now we are wondering if there are enough teams left on their Big 12 schedule to make the next month interesting.

“I don’t know if people know what you look like, Carrington. Because once a week we still get people who are surprised that you are black.”
Danny Parkins, 610 AM
GH: I get people once a week who mention to me that they are surprised I listen to local sports talk radio. I don’t see the Arbitron ratings very often anymore and I don’t know how accurate they are with WHB not participating in them. What shows do you listen to and which ones do you avoid? With satellite radio now in so many cars, I fear the local talk shows are losing their audience.

“I think New England can go to China in the middle of the night and win! That’s one of the most prepared, physically tough teams. They are fun to watch. They will more than be ready to go out there with physical toughness and resilience.”
Louis Riddick, when asked about the Patriots chances of winning in Denver, 810 AM
GH: Riddick mentioned he was a former player under Belichick and his loyalty to his former coach was evident during this interview. Riddick became audibly upset while discussing the critics of his former coach and his lack of titles since Spygate. It was obvious to me that Riddick has no objectivity when it comes to Belichick and New England. Unfortunately, The Border Patrol duo allowed Riddick to go on and on about the prowess of the Pats without anyone challenging him or asking about his apparent lack of objectivity.

“I can’t think of one good reason why you wouldn’t just flat go head hunting! … I just think it’s a very easy choice. If I can knock a receiver out early in the game and set a tone and just get a 15-yard penalty for concussing him, I’d do it every time!”
Kevin Kietzman, who questioned why the 49ers don’t just target Seattle’s Percy Harvin and try to knock him out of the game because the penalty is not severe enough to prevent the defense from targeting offensive players, 810 AM
GH: KK can’t think of one good reason not to intentionally go after an opponent and injure him? Do the words “character” and “pride” have a place in his vocabulary? Belichick was found guilty of cheating with Spygate and his reputation will never be the same because of it. Cheating to win by playing outside the rules is often tempting but it just would not be satisfying to me. Winning truly is not the only thing.

“Most guys that I run with, they’re watching gladiators! They think if you can hit somebody so hard it would kill them, that’s okay. (The NFL players) decided they wanted to play football. They don’t care if they live or die! They don’t know that guy! I’m just telling you, this is the way real men talk while watching football! You can judge it as pathetic but it is what it is.”
Kevin Kietzman, 810 AM
GH: There are so many ridiculous statements in this paragraph we could slice it up and use the pieces for its own OTC column. Maybe the tribe of “real men” Kietzman runs with is as Neanderthal as he makes them sound. If so, I suggest he upgrade his posse to include a few Huns.