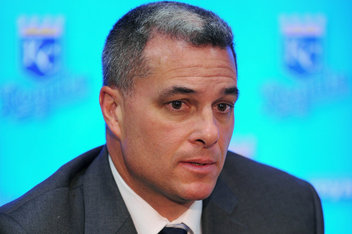 “In a small way, I feel like we’ve won the World Series.”
Dayton Moore, as he discussed the resurgence of Royals fans interest in their team during the season-ending press conference Tuesday, 610 AM
GH: There are quotes in the history of Kansas City sports that are spoken and then remembered for years – maybe generations. Some live on for their ridiculousness or humor. MU’s Larry Smith’s, “I don’t have an Internet,” comes to mind. Dick Vermeil’s comment “time to take the diapers off,” quote about Larry Johnson is another memorable line. Hank Stram’s Super Bowl comment on the Chiefs’ sideline, “Just keep matriculating the ball down the field, boys,” is another classic. Kansas City sports talk radio has made Carl Peterson’s, “How ‘bout those Royals?” comment a never-dying audio drop. There are dozens of others. Well, add one more to that list. Dayton Moore’s “World Series” comment is about to be quoted, noted and toted for however long it takes Dayton and the Royals to actually win a World Series. Read on.

“What Royals GM Dayton Moore really meant by his ‘World Series’ comment”
Headline to Sam Mellinger’s column on Kansascity.com
GH: Mellinger and The Star could have simply lit Moore up for his dumb comment like most of the radio sports talk shows and I did or will do. But Sam looks at these opportunities differently than most. Is that a good thing for his readers? Well, that depends on how you like your news and commentary. Bob Fescoe went another way. Read on.

“Yes it was worth it for Dayton Moore to say, ‘In some small way, I feel like we’ve won the World Series – for the purposes of our show!”
Bob Fescoe, 610 AM
GH: Fescoe played Moore’s “World Series” quote no less than five consecutive times within a few seconds on his Wednesday morning show – with a music bed added for production value. Fescoe did not stop the mocking – and the mocking is well earned by Moore – there. Read on.

“I would love John Dorsey to come on with Blake and Binkley today at 11:00 o’clock and say, ‘In some small way, I feel like we’ve won the Super Bowl.’ It would make my week!”
Bob Fescoe, 610 AM
GH: The Royals may have planned for their season-ending wrap-up news conference to put a happy and neat bow on their 86-win season. It did not. In my opinion – and the opinion of others – Moore and Ned Yost came off as two guys who wanted us to know just how successful they had been – despite no playoffs, little hope at resigning Santana and Wil Myers starring for the Rays this postseason.

“This news conference today was my worst fear. The team started to have a little success this year and there started to be puffiness. An arrogance. If anyone in this organization thinks they have arrived, that’s just stupid.”
Kevin Kietzman, on the attitude of some of the Royals representatives who work with WHB 810 AM
GH: I hope the brass at Kauffman Stadium heard Kietzman’s words – because he is dead on. The Royals improved but they also extended their streak to 28 years of no postseason play. They also wasted possibly the best pitching staff they will have over the next decade. 86 wins was fun – especially for two guys who needed contract extensions.

“What I don’t like is (Moore and Yost) taking a victory lap after a non-playoff season.”
Kevin Kietzman, 810 AM

“Dayton Moore said something stupid. This stupid thing he said will hang on him. His words will be mocked. … he said this stupid thing in a room full of reporters and rolling cameras and open notebooks and a live listening audience during a news conference on Tuesday… I tried to get right to the point (in talking to Moore). You shouldn’t have said that ‘World Series’ thing. It won’t look good.”
Sam Mellinger, kansascity.com
GH: I will take Mellinger at his word that he was this frank with the Royals GM. If so, he has a healthy relationship with a guy who most fans really don’t know well. And from the quote that Mellinger received back from Moore, it appears to me that the columnist has his trust. Read on.

“What I’m saying, I mean, look, ‘World Series’ is the wrong term, but I feel very, very good about where our organization is. It means a lot to me. You have to know how I’m wired. The only reason I’m a general manager is that this is my boyhood team. It’s a special place for me.… I had a strong relationship with my grandmother, and she loved the Royals. When our games are on at night, I picture my grandmother and people of her generation loving and tuning into this game. I know how important it is to their lives.… And it means a lot to me that little boys want to grow up and be baseball players so they can be like Sal Perez or Eric Hosmer. That means a lot to me. That means everything to me. That means more to me than winning a World Series.”
Dayton Moore, kansascity.com
GH: Okay, that is the second dumb “World Series” quote from Moore delivered mere minutes apart. And this one was made in an attempt to clarify his first dumb quote. Hey, everybody who knows Karen Kornacki likes Karen. She is as sweet and nice a person as you will ever meet. But Karen is not who I want delivering me my sports news or commentary. Does Dayton think season ticket holders shell out thousands of dollars each year so that little boys will want to grow up and be baseball players? Screw that! We want some more flags to fly in left field! There is only one World Series and it’s not being won in Kevin Kietzman’s mom’s living room.

“I’ll paraphrase it. ‘I’ve done my job. This is the best you can hope for in Kansas City.’”
Kevin Kietzman, on Moore’s comment that he feels like in a small way the Royals have won the World Series, 810 AM
GH: Like Fescoe, Kietzman took a harsh and demeaning stance on Moore’s quote. He chose to use Moore’s words to embarrass him. Mellinger took a kindler more supportive approach. I think both are necessary but I prefer hitting an underperforming employee hard rather than soft. More needs to know he is nowhere near successful – no matter how many little boys in Overland Park are playing pepper.

“Look, I don’t know if Ned’s the perfect manager. But I know one thing: After the last game in Chicago, the players freaking love Ned Yost. It’s not the courtesy fist bump or whatever. (Hosmer) comes up from a distance and gives him one of these (big hugs). Same thing with (Mike Moustakas), and other guys. Sal says, ‘I love Ned Yost.’ That’s important to me.”
Dayton Moore, kansascity.com
GH: This is a money quote that Mellinger extracted from Moore. I may be wrong but I don’t think many members of the media would have gotten this quote from Moore – in this context. In written form, Moore appears to be letting down his guard and giving us a glimpse as to why Yost received a two-year extension. I don’t happen to agree that the players loving their manager is a key component to winning but obviously Moore does. Ned loves his players too much. It is why Frenchy, Getz and Wade Davis were allowed to drag this team to the brink of failure before the All-Star break.

“The Glass family is trying to resurrect the franchise that they buried – and that’s what they should do. … I still want them to go out and do more.”
Steven St. John, 810 AM