“This is the last time. If I ever see you fucking again I’ll fucking shoot your fucking ass. You understand? It’s the last fucking time. Ever.”
George Brett, while signing an autograph for Brandon Farrens after Brett arrived at KCI Airport on Thursday, YouTube.com
GH: Babe Ruth never had to deal with cell phone cameras and YouTube. In a matter of hours, Farrens’ poorly shot and unedited video of Brett verbally assaulting him at KCI made the professional autograph hound a popular interview for local and national media. Viral is a word too often used today but it fits here with this story. Farrens used his own rudeness and Brett’s fame and anger to make him famous for the day. Isn’t he special? Read on.

“Farrens said he has asked for Brett’s signature about 35 times and gotten it about 15 times.”
Chris Oberholtz, reporter, KCTV5.com

“You’re an asshole!”
Brandon Farrens, autograph stalker, yelling at Brett after he successfully dropped four “fuckings” on him in the space of 26 words, YouTube
GH: Does Brett have a reputation for being a prick in public at times? Sure. I loved his tirade on the golf course a few years back when he ripped Jack Harry and anybody else who was criticizing Trey Hillman and his unicycle Royals.  But who is the real asshole in this video? Brett or the grown “man” who has asked Brett for his autograph on 35 different occasions?

“Farrens’ Facebook page is filled with pictures of him with celebrities including athletes like Dexter McCluster and Andrew Wiggins to musicians like Snoop Lion, the artist formally known as Snoop Dogg and Merle Haggard. When Kansas City Chiefs coach Andy Reid first arrived at Arrowhead Stadium on Jan. 4, Farrens was there to greet him and get Reid’s autograph on two footballs.”
Chris Oberholtz, reporter, KCTV5.com
GH: I really don’t care what your personal fetish is as long as its execution doesn’t impede on the privacy of others. If Farrens wants to hump old issues of Sports Illustrated in his bathroom, be my guest. Well, not my guest, but you understand.

“At the airport, he came up to me walking through the terminal. He asked me, ‘Would you sign this for me?’ I said, ‘No. I’m done. I told you before, I’m done.’ After he repeatedly came up, my temper was getting a little off and finally I did sign. And I told him, ‘No more, I’m done. I never want to see you again. That’s it.’”
George Brett, in an interview with Dick Kaegel, MLB.com
GH: Dana and Parks interviewed Farrens on their KMBZ afternoon-drive show and asked him what he would have done if Brett would have simply said, “No.” Farrens told them he would have respected Brett’s answer and left. We obviously have two different stories here. And I don’t care at all that Brett told this idiot he would shoot him. We have too many assholes in this world as it is.

“No.”
Brandon Farrens, when asked by KMBZ’s Scott Parks if he will ever ask Brett for an autograph, 980 AM
GH: Maybe more celebs should start dropping f-bombs and threatening to shoot autograph stalkers. It appears to be pretty effective.

“Bad choice of words. After declining his requests five or six times walking through the terminal, waiting for my bags, I’d had enough. I didn’t know how else to get him off my back. He got his autograph, he was unharmed.”
George Brett, MLB.com
GH: We are not George Brett and probably very few of us will ever know what it’s like to be hounded in public. My problem with Farrens is that he didn’t keep this between him and Brett. He went to YouTube with his video and wanted his 15-minutes of blame. What a weasel.

“I apologize for using foul language in a public place to a guy that’s been stalking me for a long time.”
George Brett, MLB.com
GH: Who was surprised that Brett (or any MLB player outside Mike Sweeney) drops f-bombs in his personal life? Here is what is not covered in most of the reporting on this story – Brett signed the autograph for the guy! Yeah, what an asshole.

“Brett had flown into Kansas City for a gala at Kauffman Stadium Wednesday night. The Native Sons and Daughters of Greater Kansas City honored Brett as the ‘Outstanding Kansas Citian of The Year 2013’ at their Annual Gala Awards Dinner to be held on Nov. 6 in the Diamond Room at Kauffman Stadium.”
Chris Oberholtz, reporter, KCTV5.com
GH: This is my favorite part of the story. Brett is doing his damnest to remove that sweet, country halo over the heads of Kansas Citians. Think we are ashamed of Brett’s antics? Hell no! We celebrate ‘em! We can be just as bad ass as any big city back East.

“Here is a list of people where it is okay to ask for an autograph; 1) Children. That’s it.”
Danny Parkins, 610 AM
GH: Perfect.

“I see the ol’ alma mater is luring students to a hoops game with bacon, which is the same way we get our dog to come in when it’s raining. I would poke fun, but … Free bacon.”
Austin Meek, @austinmeekRG, Twitter 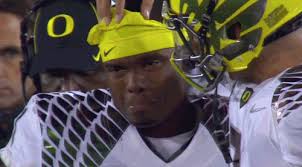 “Unfortunately for Oregon this game and the way it’s developed feeds the stereotype that the Ducks can’t play with physical teams.”
Kirk Herbstreit, @KirkHerbstreit, after Oregon was exposed by Stanford and down 26-0 in the fourth quarter, Twitter
GH: Did Herby watch the same game as I? Stereotype? It almost sounds like it was an unfortunate mistake that Stanford pounded the Ducks like they were baby seals.

“I’ve got a big problem with NU and fake blood-spattered Wounded Warriors fb outfits. Forget the charity part. Is everything 4 sale in NCAA? Yes, that’s right, the Army, Marines, Air Force, Navy spend hundreds of millions on advertising–looks like somebody bought Northwestern too.”
Rick Telander, @ricktelander, on his alma mater’s special military-themed uniforms this weekend, Twitter
GH: I don’t have a problem if Northwestern is getting paid to wear blood-splattered uniforms. Anything that will allow schools to take the burden of financing their sports teams from the fans is a positive in my book.

“(Nick Saban) would be – and I mean this in all seriousness – he would be at risk of being assassinated by a crazed (Alabama) fan. Saban is not leaving.”
Will Harris, CFB insider for ESPN, in an interview with Soren Petro, when asked about Saban possibly taking the Texas job, 810 AM
GH: Ain’t no football like football in the state of Alabama. They kill trees, don’t they?

“Texas is supposed to hire (TCU’s) Gary Patterson. I suppose they will.”
Will Harris, 810 AM
GH: What happens if Texas beats Baylor and wins the Big 12? All of Austin will rejoice and recoil at the same time.

“Roll Tide!”
Will Harris, as he signed off from his interview with Petro, 810 AM
GH: Your sports “journalist” circa 2013.