OTC: Jack Harry Misses The Old Days When The Media Was Royal Too / MU Wins, Barely 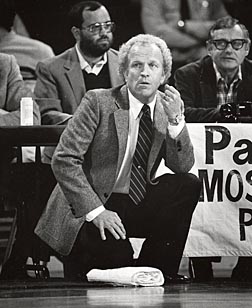 “It’s all changed now. The players look at the media as somewhat the enemy. They don’t know your names, they don’t care. Which is fine…”
Jack Harry, in a conversation Wednesday with Kevin Kietzman and Danny Clinkscale while the two radio personalities were in Arizona covering the Royals spring training, 810 AM
GH: Why should a viewer or listener care about whether or not Eric Hosmer or Alex Gordon knows Jack Harry’s name? Jack says it’s “fine” but his words betray him. He obviously misses the days when he and others in the media were more of the same status as the athletes they covered.

“The relationships with the players was so much different back in the ‘70s and ‘80s.”
Jack Harry, 810 AM
GH: So Jack misses the days when he was golf buddies with Cotton Fitzsimmons and playing the role of Norm Stewart’s public relations firm on this side of the state? The media has evolved and improved greatly from those dark days when friends would cover up stories for friends. Jack might miss those golf outings but guys like Jason Whitlock who weren’t much into golf or playing nice ruined it for the Jacks of the world.

“The University of Missouri System Board of Curators has approved an amended contract for Head Football Coach Gary Pinkel that will keep him patrolling the Mizzou sideline through Dec. 31, 2020. With the new agreement, Pinkel’s guaranteed salary will increase to $3.1 million, up from $2.8 million, while his assistant coaching staff will receive an increase in their salary pool to $3.2 million, up from the previous amount of $2.66 million.”
Chad Moller, Mizzou Athletics Communications
GH: Well, what a difference a season makes. Pinkel was all but circling the drain with many Mizzou football fans after last season’s SEC nightmare. Now Pinks has a new contract through 2020, a hefty raise, more cash for his staff and he was seen with a young hottie in the aisle of last night’s basketball game at Mizzou Arena. Life is good in Jumboland.

“This is an ugly, ugly win – but sometimes you’ll take an ugly win.”
Gary Link, MU’s radio analyst, after Mizzou edged Texas A&M 57-56 at Mizzou Arena Wednesday night, Tiger Radio Network
GH: Mizzou never led in this game until Ross hit his final two free throws in the last minute. And the final minute was one that should have come with a NC-17 rating.

“It was the worst final two minutes of basketball that I’ve ever seen as far as both teams making mistakes. Both teams just giving the game away over and over again.”
Steve St. John, 810 AM

“Since the night of Feb. 1, Arkansas has lost one game by a single point. Raise your hand if you want to play the Razorbacks in the NCAAs.”
Eric Prisbell, @EricPrisbell, Twitter
GH: Mike Anderson has turned it around at Arkansas in the span of a month. The guy we had all left for dead is not only thriving in Fayetteville but looking like Florida’s next big hurdle in the SEC tourney. That patronizing SOB just might be dancing all the way to the Sweet 16 this season.

“Boo… RT @BlumbergOTB: Tiger radio network chats with a sponsor instead of broadcasting Senior Mic Night. #Fail”
Kurtis Seaboldt, @KSeaboldt, Twitter
GH: I don’t understand how the school or the broadcast could be so out-of-touch with their audience. Just awful.

“Does MU really keep hopes alive with that kinda game? That was ugly. Credit for coming back. As an MU fan you should not be happy about the way your team played at all, regardless of a win. Should blow out TAMU.”
Bob Fescoe, @bobfescoe, in what may have been the most obvious tweet he’s sent this year – or any year, Twitter

“Obviously, I retweeted that guy and he got hammered by Kansas fans for being an idiot.”
Bob Fescoe, on a Twitter war of words he engaged in with a Mizzou fan following the A&M game, 610 AM
GH: Fescoe managed to start a Twitter war between KU and MU fans? The man is a regular Dalai Lama of motivation.

“Mizzou still has a chance to finish as high as fourth in the SEC standings with a win on Saturday at Tennessee.”
Steve Walentik, @Steve_Walentik, Columbia Daily Tribune basketball writer, Twitter
GH: That is just, well…unbelievable.

“Amazing night for the seniors…Can’t wait to be a senior. Too bad I didn’t play but they took care of business.”
Joel-Hans Embiid, @jojo_embiid, Twitter
GH: What? Is Embiid talking about getting a price break at the movies? I would love to see the big guy hang in Lawrence for three more years but that is less likely than Frank Haith turning out to be the next Gary Pinkel.

“Saturday: McDermott goes for 3,000 in his last home game. Sunday: Nebraska goes for its first NCAA bid in 16 years. #Wow #BasketballState”
Dirk Chatelain, @dirkchatelain, Twitter
GH: Nebraska is one of the more surprising teams of this crazy season. They are not a particulary attractive team to watch but they have won at Michigan State and at Indiana this season. I did not think I would live long enough to type that sentence.

“It’s going to be cold enough to snow. Next Wednesday, Thursday and Friday a strong cold front’s going to come through.”
Gary Lezak, on his weather forecast for the Big 12 basketball tournament next week in Kansas City, 8109 AM
GH: What a perfect way to end this bastard of a winter – more winter.

“One oatmeal, a sausage McMuffin and a large Diet Coke.”
My breakfast order today (and most mornings) at McDonald’s
GH: I discovered after driving away that I received one oatmeal but no McMuffin in my bag and a large regular Coke. I have never gone back to correct a fast food order and I did not this time. I just got back on the Interstate to continue my commute. But what if McDonald’s changed to see-through bags? I would have immediately seen that my McMuffin was missing. I am offering this idea up to Ronald at no charge.

33 Responses to OTC: Jack Harry Misses The Old Days When The Media Was Royal Too / MU Wins, Barely