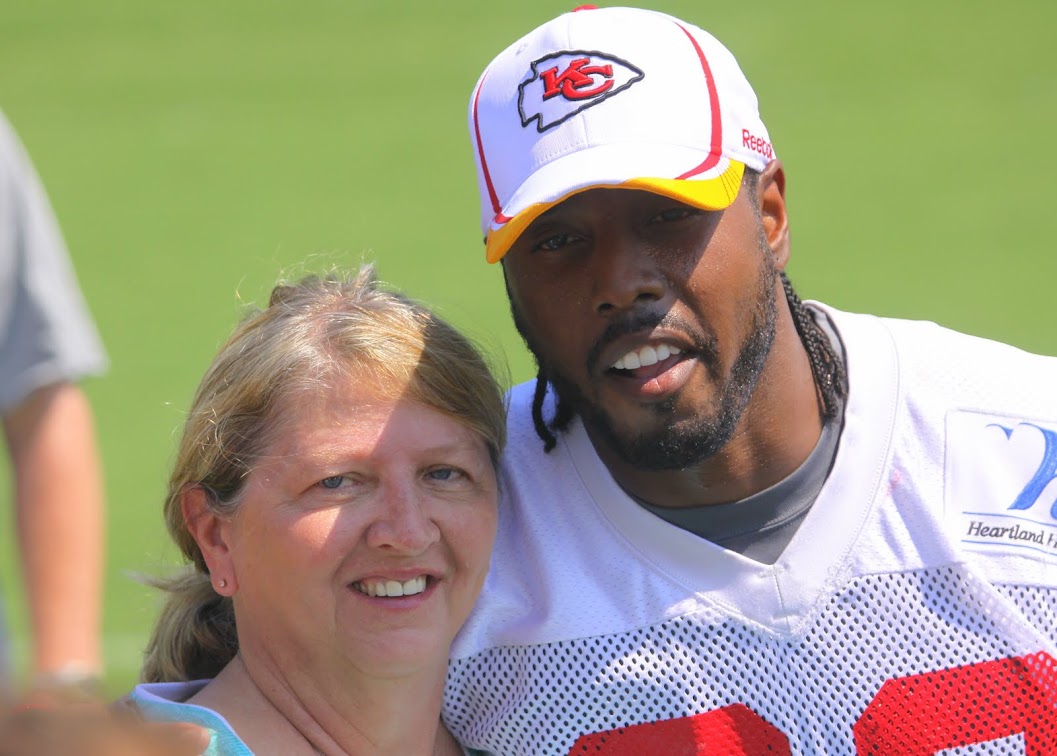 “Oh, that’s nothing. That’s automatic. I’ll be there [in a Chiefs’ uniform]. I’m staying in shape until it’s the time to sign on the dotted line. You got the draft, they got to move stuff around, fill all the other positions and make sure the team is solid before you do it and that’s OK with me.”
Dwayne Bowe, who was interviewed by Joel Thorman of ArrowheadPride.com, on Friday as the Chiefs’ franchise player signed autographs at a NFLPA Rookie Premiere in Los Angeles Friday night where he was an honorary captain for the flag football game, Twitter
GH: Thorman scored big in securing this interview with Bowe, who the Chiefs have designated as their franchise player. There has been much speculation here locally as to what the Chiefs are going to do with Bowe – and Scott Pioli has not taken kindly to the media speculation or questions. At least for now, it appears Bowe is ours for at least another season. Read on.

“I also asked [Dwayne] Bowe if he was staying in shape. He said: ‘Look at me.’ He looked sharp.”
Joel Thorman, @ArroweadPride, Twitter
GH: I saw a tweet from Jeff Rosen, the sports editor of The Kansas City Star, in response to Thorman’s above tweet. He congratulated Thorman for the Bowe response, “Look at me.” I love this kind of public respect from a mainstream media editor to a local blogger. My appreciation for Rosen’s gesture has nothing to do with me expecting or desiring my blog mentioned by Rosen or The Star. It has to do with my joy in watching the petty walls that divide those who cover sports melt away in an electronic fire storm.

“It felt like it but that’s what I do man. These people come out here to see the Show so I have to give them something for their money. Fans travel from everywhere to see the guys at the top of the league. The least I can do is take my time out to sign their autograph. That’s all I have to do and it’ll mean the world to them.”
Dwayne Bowe, when asked by Thorman about signing so many autographs at the LA event, ArrowheadPride.com
GH: I have watched Bowe sign and pose for photos after Chiefs’ summer workouts in St. Joe and he is as gracious as any player the Chiefs have when it comes to accommodating the fans. I know there are a lot of kids and old ladies who would sure miss Bowe if he doesn’t make it to Missouri Western’s campus for training camp.

“I watched the Dbacks take [batting practice] yesterday and was sick. Kirk Gibson, Dusty Baker, and Matt Williams ignoring kids for autographs, real classy.”
Jarrett Sutton, @JarrettSutton25, former Mizzou basketball player, Twitter
GH: MLB might be the worst sport for getting stars to sign. I have never understood the desire for anyone over the age of 12 to want an autograph. If there was an age limit on autograph seekers, I think athletes would be more inclined to sign. But the oafs who dog these guys at hotels, at dinner and at the park ruin it for the kids.

“I love St. Joe, man. The fans line the field just like this. I signed every day for 30 days. It was like, when they see me out at the Wal-Mart, it’s nothing but love. I’ve never seen fans like Kansas City that’s so dedicated and so honored.”
Dwayne Bowe, ArrowheadPride.com
GH: How can you not root for a Chiefs’ player who loves signing autographs, loves St. Joe and shops at Wal-Mart? Pioli needs to sign this guy before David Glass hires him to replace Rex Hudler.

“Rex Hudler would be a great baseball TV announcer on some kids network with a target audience of 8 year olds.”
Brian Rosenthal, @HuskerExtraBR, sports writer for Lincoln Star Journal, Twitter

“I want to make this perfectly clear, I have nothing unkind to say about Rex Hudler. He genuinely seems like a very good man. He’s been very kind to me.”
Kevin Kietzman, 810 AM
GH: KK makes his living critiquing the work performance of athletes, coaches and even at times members of the sports media – remember his Bob Knight petition? So why does it matter if Hudler is a very good man or if he has been kind to Kietzman? Are we only supposed to be critical of the jerks? That is the easy, spineless way to operate. There isn’t a nicer person in the media than Karen Kornacki, but I am fairly ruthless in critiquing her talents as a sports reporter and broadcaster. I think that’s just the way you have to be if you want to be considered fair, objective and worthy of being read or listened to.

“Cassel is better than you give him credit for. Two years ago this guy was a Pro-Bowl quarterback! You’ve said he’s not good enough to get them to a Super Bowl – and he is good enough!”
Jack Harry, in a debate with Kevin Kietzman about the Chiefs’ quarterback, 810 AM
GH: I think Cassel has a chance to be much improved this season if the injured Chiefs return to play at the same skill level as before. But he is definitely the media and fans target for criticism in 2012.

“I think Clark Hunt gets a bad rap for being cheap.”
Soren Petro, 810 AM
GH: Have The Clarks accepted an invitation to be a weekly guest on Petro’s show?

“Said it before and I’ll say it again: The Super Bowl in New Orleans this year will be the most awkward SB week in the history of the league.”
Trey Wingo, @wingoz, Twitter
GH: Will it really matter that the Super Bowl is in the same city as where The Commish blew up the Saints over Bountygate? I can’t imagine anyone will even care come February on Bourbon Street.

“The Royals’ next home stand will have our Girls Night Out. … No connection whatsoever, but it’s Dog Day at The K, today.”
Ryan Lefebvre, Royals Television
GH: The only thing better than Beaver’s above comment was what Rex Hudler offered up in response; “Glad you said it so eloquently.” It that’s what passes for eloquence in baseball, we know why Hudler has a job in front of a microphone.