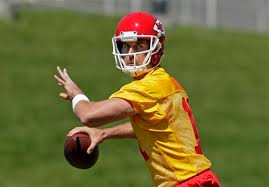 “I feel so much better about the (Chiefs’) first- and second-team quarterbacks this year that it’s not even funny. I’m just glad the big concern is who is the third-string quarterback going to be and not who the quarterback is.”
Nate Bukaty, 810 AM
GH: Well, Evan Silva doesn’t share Nate’s optimism when it comes to Alex Smith. Read on.

“I’m a little bit skeptical that Alex Smith is going to function well under Andy Reid. I don’t think Alex Smith can function in a high-volume passing offense. I really don’t. Colin Kaepernick can throw the football. Alex Smith can’t.”
Evan Silva, NFL analyst for NBC, in an interview with The Drive on 610 AM
GH: Silva is as down on Alex Smith as anybody this side of Kevin Kietzman – and Silva doesn’t have a Geno Smith-sized axe to grind. If Silva is right and Alex Smith tanks with the Chiefs, KK is going to celebrate Christmas in October this year.

“The reps (Ricky Stanzi) got were not numerous and the ones he did get were not good. If you can’t hit a moving target you should not be playing quarterback in the NFL. If he takes the field at any time this year, this team will be worse offensively than they were last year. Three years in the league and he still can’t complete a pass.”
TJ Carpenter, after watching the Chiefs’ third-string quarterback battle the first two days of camp, 810 AM
GH: Two days into the Chiefs’ camp and it sounds like Ricky Bobby Stanzi is still looking like he did his first two years in the NFL. He was a fun character while he was here but his days in St. Joe have to be numbered once the first cut-down date is here.

“I would argue that (the Chiefs’) secondary should probably be in the top five (in the NFL).”
Jeff Chadiha, NFL writer for ESPN.com, 810 AM
GH: Two words for that to come true – Eric Berry. I am still not sold he gets his role as a safety – despite his two All-Pro selections.

“Wes Welker on comparing Peyton Manning and Tom Brady: ‘It’s like comparing Michelangelo and Picasso.’ ”
Adam Schefter, Twitter
GH: Can you imagine having the career Wes Welker has enjoyed? Some guys are Dwayne Bowe and get saddled catching passes from Matt Cassel and some guys are Wes Welker who get to play with two of the game’s best quarterbacks in NFL history.

“What’s that classic Monty Python line? Not dead yet! Who knows? But there are times, like Wednesday’s dramatic 4-3 victory over Baltimore when the Royals, even now, make you want to believe.”
Bob Dutton, Royals’ beat writer, after the Royals 4-3 walk-off win Wednesday night over the Orioles, Kansas City Star
GH: If there is a better MLB beat writer in the country I haven’t read him or her. If the Royals were as good at their job as Dutton is his, that left field skyline at The K would be awash in pennants.

“Yesterday was one of the more epic days in the sports media business because Alex Rodriguez and the New York Yankees are openly feuding now.”
Bob Fescoe, 610 AM
GH: You can take Fescoe out of New Jersey but you can’t take the New Jersey out of Fescoe. Who in KC gives two pine-tar dumps about A-Rod and his feud with the Yankees?

“Wow, that young Wil Myers can hit! Wonder if a team like KC could pry him away with a veteran pitcher like Shields. Oh. Wait.”
Joe Posnanski, @JPosnanski, Twitter
GH: Myers is really starting to crank for the Rays. He’s moved into the three spot in the batting order and has only gotten better under the pressure.

“Speaking as a Rays fan (yes we are here) thanks to the Royals for this kid. He is the missing ingredient the Rays have not had.”
Joseph Caranante, @ApplePasta, Twitter
GH: I feel really good for Myers but this is a bit painful to read…especially for the next 15 years.

“Until Jadeveon Clowney declares this is his last year, Jay Z or any of these agents should not be trying to recruit (Clowney) now. Put it this way, how would Kansas fans feel about Jay Z contacting Andrew Wiggins right now?”
Henry Blake, on the South Carolina defender who is expected to be the top draft pick in 2014, 610 AM
GH: Ridiculous. Why should Clowney or any undergrad be denied counsel for his future employment? Would a student majoring in chemistry or finance be restricted from speaking to a potential head hunter? The NCAA treats their student athletes like children and they have zero right in doing so.

“A year ago today (in KC), it was 106-degrees. No 100s on this 7-day forecast.”
Brett Anthony, @TheBrettAnthony, KSHB TV-41 meteorologist, on the weekend forecast that calls for lows in the 50s and highs in the 70s, Twitter
GH: Just what we all already knew – Kansas City is cool!