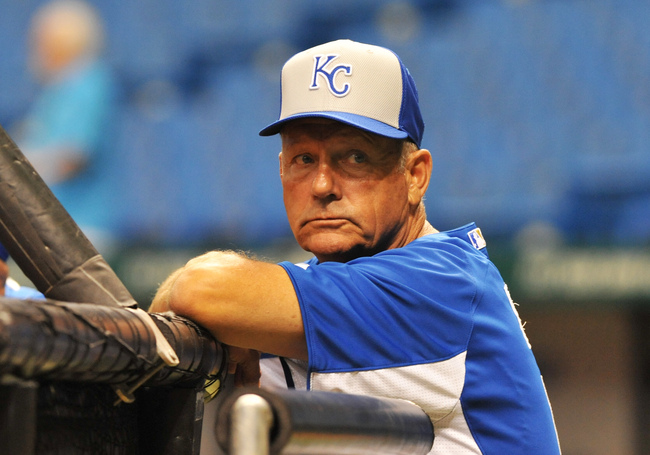 “Brett spent 48 games in the role and, while the club went 26-22 in that span, offensive production actually declined. … Individual results were mixed. First baseman Eric Hosmer and third baseman Mike Moustakas showed notable improvement, but left fielder Alex Gordon and catcher Salvy Perez dipped significantly. Even so, the Royals uniformly praised his impact.”
Bob Dutton, after George Brett announced he would be stepping down from his interim role as the Royals’ hitting coach and moving back to a VP role outside the dugout, Kansas City Star
GH: The Royals misguided experiment (or desperate attempt to save Dayton Moore’s and Ned Yost’s for a few more months) ended strangely and abruptly just 48 games after it excited the Royals fan base. George Brett quit – in mid-season no less. I didn’t think I would ever write those words. Read on.

“I made that adjustment for almost two months, and it was getting tougher and tougher. … I don’t want to say it’s too much travel. I don’t want to say it’s too much of a grind. It’s just a different lifestyle from what I’m used to. .. Now I’m 60. I was trying to do that life again and it was just very difficult for me.”
George Brett, in his Thursday press conference
GH: Brett was 60 when he took the interim job – so why did he use that repeatedly as an excuse? This seemed like a crazy idea to me when it was proposed and it looks even worse with Brett walking out on his team as they struggle to stay relevant through the two toughest months of the season. I don’t see how you read this as anything but selfish on Brett’s behalf. Don’t take the gig if you can’t do four freaking months.

“What’s a couple more months? You signed up for this. Come on, help ‘em out! I don’t know. It’s just a little bit odd. They’re almost at the end of (the season). Two more months is not anything! Just finish it out and then you can bow out gracefully with no questions asked. … If you’re going to be there then be there.”
Jayice Pearson, 610 AM

“I think Father Time has now told a 60-year-old George Brett you can’t do something. I think that’s why you saw the emotion out of Number 5 yesterday.”
Josh Vernier, 610 AM
GH: Take it from a guy who is almost the same age as Brett, he was well aware of his physical limits long before he put his Royals’ uniform back on. This was no new realization to Brett. He simply wanted to go back to playing golf and not having a schedule. Who wouldn’t? But you don’t quit in the middle of a task, George. You just don’t.

“It’s like he took a vacation from his life to have a job. Everyone else takes a vacation from their jobs, George Brett took a job from his vacation. … It just seems like he wants to go back to the life of being George Brett.”
Danny Parkins, 610 AM
GH: The Royals pulled into Chicago Friday about 2:00 AM to check into their hotel rooms. George is reportedly on his way to Idaho for a family vacation this weekend.

“I think everybody all along knew this was going to be a trial run.”
Rex Hudler, 610 AM
GH: I don’t know of many people who expected Brett to quit with two months of the season remaining – especially the players.

“It just stinks. It really does. It was awesome having George around here every day. … George has been like a father to most of us here and we thank him for the month that he put it.”
Eric Hosmer, when asked his reaction to Brett’s decision to quit as the team’s batting coach, 610 AM

“George is a straight-up person. If something doesn’t look good, he’ll tell you it doesn’t look good.”
Eric Hosmer, Kansas City Star
GH: George might not have been quite as “straight up” with the players as they thought. Read on.

“Sometimes guys weren’t (swinging the bat well) and we tricked ‘em. We’d tell them in BP, ‘Your swing looks great.’ And it was terrible. Just so they believed they could get a hit. … Because if you believe in yourself, it’s amazing what you can accomplish. If you have no confidence in yourself, you have no chance.”
George Brett, in his Thursday press conference

“I was not a good mechanical hitting coach, I’ll be the first to admit that.”
George Brett, in his Thursday press conference
GH: I think this too was a big reason George quit – he wasn’t very good at his job. The art of coaching is very different from the art of playing. Brett said he had no idea how to incorporate video into his coaching. What? How hard is it to master watching video? I think George liked playing but hated the work that is coaching. Playing ball was never work to George. Coaching is all about work, long hours and travel.

“Brett’s decision will be read a thousand different ways by a thousand different people with a thousand different agendas. Maybe he lost faith in the team. Beefed with manager Ned Yost. Felt like he wasn’t helping. Whatever. The truth is Brett just didn’t have it in him anymore. The energy. The drive. The tingle in the nerves that every player and every coach talk about needing to tackle the big-league life.”
Sam Mellinger, Kansas City Star
GH: I think Sam’s a bit dramatic in his depiction here. There are only a couple of ways to read Brett’s decision. He either got tired of the job or he thought he was so incompetent he was not helping the team. Or maybe both.

“I just thought his reasons for getting out of it was a little slim.”
Carrington Harrison, 610 AM

“No one in the Royals organization can take an anti-George Brett leaving stance because he’s George Brett. I wonder if they tried to talk him out of it.”
Danny Parkins, 810 AM
GH: Joel Goldberg, who is as faithful a company man as the Royals could ever ask for, told 810’s Border Patrol Friday morning that he believed Brett’s impact on the team in his two months was “huge.” Goldberg went on to say that he didn’t think Brett’s real impact would be able to be determined until a much later date. Unfortunately SSJ and Nate allowed Joel to get away with this BS.

“The importance of a hitting coach is vastly overrated if George Brett can just leave in the middle of the season. … Obviously George Brett is an icon. If you say anything negative about George Brett, people get all up in arms about it. … That ‘can’t teach’ line, I think that’s disrespectful to teachers.”

Danny Parkins, on Brett saying those who can do and those who can’t teach, 610 AM
GH: Brett is entertaining in his press conferences because he often does not have a filter. He pretty much demeaned all hitting coaches when he stated his life-long goal wasn’t to be a batting coach. He then went on to say he was lucky he was one who could “do” because it paid better. Funny? Yes, but you have to wonder how loudly Pedro and Ned were laughing inside.

“Fellas, what a beautiful thing to have (Brett) there for the two months we had him. … If that’s more a selfish decision then why not? George is an icon.”
Rex Hudler, in an interview with The Drive on 610 AM
GH: Is George Brett so iconic in Kansas City that he is above critique? It’s still a team game and it sure looks to me like George let him team down when they needed him most for their stretch run.

“(Brett’s) involvement is going to grow deeper in the future and it’s going to be enhanced, and he’s going to be involved in everything we do in baseball operations from the bottom up.”
Dayton Moore, on Brett assuming the role of a Royals VP, MLB.com
GH: Are the Royals opening up a VP office in Idaho?

“If you haven’t heard (George Brett’s press conference) you need to go listen to the podcast on our website. It is amazing! George Brett sounded like he is the manager! … How in the world is Ned Yost going to take what I just heard today?”
Kevin Kietzman, in early June, just after Brett accepted the role as interim batting coach, 810 AM
GH: KK all but predicted Brett’s persona would be so magnetic the Royals would fire Yost and name Brett the manager before the summer was over. KK continues on his “ridiculous professional role.”

“I just don’t think there is any long-term deal here as far as (Brett) being the hitting coach or being involved in the front office. It’s just my theory of knowing the guy and knowing that type of person.”
Brian McRae, in early June, 810 AM
GH: McRae was far more accurate with how he perceived the George Brett experiment unraveling.

“Brett taking 81 games at home in the TV Booth wouldn’t completely suck.”
Chris Kamler, @ChrisKamler, Twitter
GH: I don’t think you can get Brett to do anything for 81 games but having him in the TV booth would be very, very entertaining. Brett has a tendency to say things that make people uncomfortable – and make great copy for my OTC.

“It needs to be the best baseball this team has played in a decade if they’re going to compete (for the playoffs).”
Josh Vernier, after the Royals won three of four games from the Orioles, 610 AM
GH: Are the Royals still playing meaningful baseball at seven games back and 48-51 on July 26th? Barely. But I am still watching, hoping and dreaming. As I know are many of you.