“So I’ve got $32 million — wonder if there are any 31-year old, soft-tossing lefties who give up a lot of home runs available.”
Joe Posnanski, @JPosnanski, after the Royals followed up their tease of “a major baseball-related announcement” with the signing of the Angels’ free-agent starter, Jason Vargas, Twitter
GH: The Royals touched off some wild speculation Thursday afternoon when they called a press conference for “a major baseball-related announcement.” Okay, this is the Royals so we should know better than to get our hopes up. But we are Royals fans. It is impossible to squash our unfounded optimism for this franchise! So we got Major Vargased. Meh…

“My only beef is in how it was packaged and how it was sold. Jason Vargas is just not a major move. I’m just thinking, ‘Where is Dayton’s head at?’ ”
Carrington Harrison, on the Royals’ hyping their signing of Jason Vargas as “a major baseball-related signing”, 610 AM
GH: The Royals might have the worst feel for their fans of any organization this side of Soviet Russia. Does Dayton live in Bentonville, too? How can you miss this badly with an announcement – especially on the heels of what Texas and Detroit just pulled off? Vargas is like getting invited to the Holiday Bowl but Dayton tried to spin it into a Rose Bowl bid.

“Probably a lot more than you want to believe. @royaljhawk3 how many MLB teams would tease this as a “major” announcement?”
Bob Dutton, @Royals_Report, in response top @royaljhawk’s question, Twitter
GH: I am not familiar with the marketing ways of other MLB franchises but if Dutton is correct, MLB professionals are not nearly as smart as we credit them being.

“You don’t get to where you want to go signing 31 year old pitchers to 4 year contracts!”
Jack Harry, @jackharrykshb, Twitter
GH: How does Mad Jack feel about 70ish TV sports anchors getting big-buck contracts?

“Love the @Royals signing Jason Vargas. Saw him pitch at @LBSUAthletics and in #MLB. Tough flyball pitcher who will benefit from best OF in G.”
Steve Physioc, @StevePhysioc, Twitter
GH: It would be easy to dismiss Physioc’s tweet as singing the Royals’ company line but he’s not the only one out there praising Dayton Moore for this acquisition. Read on.

“To me, Kev, it’s a perfect fit. This guy is going to be able to take the ball 32 or 33 times and get the job done for you.”
Danny Clinkscale, on the Royals signing the former Angels’ left-handed starter, 810 AM
GH: I keep hearing from those in favor of this signing that Vargas is an “innings eater.” Let’s hope Vargas eats innings like Shields does – with lots of zeros.

“Did you hear that dude keep on calling Dayton, ‘Ned?’ That’s our competition. It was pretty spectacular. That’s our competition. Doesn’t even know who he’s talking to.”
Josh Vernier, 610 AM
GH: That “dude” was none other than Danny Clinkscale, who should know the difference between the Royals’ GM and the Royals’ skipper. But like myself, Clink is getting up there in years. Brain farts for old guys are almost as common as the aromatic variety.

“(810) was just mad because 610 beat them to the punch getting (an interview with) Jason Vargas.”
Josh Vernier, who was able to secure the Royals new pitcher for a one-on-one interview, 610 AM

“I think it’s great that the Royals were able to do this.”
Kevin Kietzman, on signing Vargas, 810 AM
GH: The contrast to how Kietzman and Clinkscale covered this Royals’ signing and how Danny Parkins and Carrington Harrison covered it was interesting. When Todd Leabo tried to make fun of Dayton’s major announcement, KK shushed him and had him move on. 610’s guys on The Drive attacked it from all angles by pointing out the positives of the signing but also the blatant cheerleading of calling this a major announcement.

“Just keep hoping and praying. God allows everyone to flourish eventually.”
Carrington Harrison, in his advice to frustrated Royals fans, 610 AM

“I’m having trouble summing up any enthusiasm one way or the other for this (Vargas) move.”
Rany Jazayerli, 810 AM
GH: Once again, Rany sums up my feelings about another Royals decision perfectly.

“If (Dwayne Bowe) feels anybody tug on his jersey or anything like that he kind of throws his shoulders back and throws his arms up and his legs start stepping out like ‘I was held for ten yards!’ And really that wasn’t the case! He’s got to run through that!”
Marc Boerigter, former Chiefs wide receiver, 810 AM
GH: Something is wrong with Bowe. And it appears to be more than he’s lost a step or two. He looks to be the poster child for everything that is wrong with paying a star athlete a big long-term contract and then watching his play quickly deteriorate. He is in jeopardy of being remembered as Dwayne Blow. 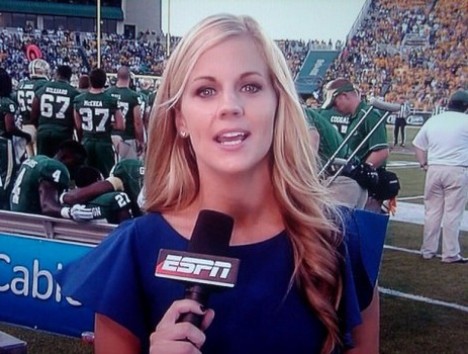 “I remember life before Twitter. I know, it’s only been a few years but sometimes it feels like a different lifetime. … After three years on my own in NYC and two years finishing school in Virginia, I signed with Fox College Sports to cover Big 12 College Football on the sidelines. I convinced my bosses to let me use this new social media tool called Twitter to interact with fans and answer their questions. After my first report, I checked my phone to see what people were asking.
“Your scarf is hideous.”
“What’s wrong with your eyebrows.”
“You’d be a 10 if you got a boob job.”
“You’re the worst sideline reporter in history.”
Wait, what?”
Samantha Ponder, ESPN Sports sideline reporter, prothityone.com
GH: If you are not familiar with Samantha and her work please know she is gorgeous and good at her job. So why the public post as to how thin-skinned she is about how the public views people on television? Is this news to her? Did she think none of this went on prior to Twitter? Does she think she is employed by ESPN simply for her interview skills? Did her NFL quarterback husband marry her for her sense of humor? Child, please! Read on.

“First of all, I didn’t ask. Second, I have weird eyebrows? Third, since when is a 50+ year old stranger telling a young woman that she should get surgery to visually please him not incredibly creepy and perverted? Fourth, at least things can only go up from here…? Since then, I’ve read what’s wrong with just about every part of my body. My skin is bad, my hair is gross, my nose is too big, my eyebrows are (still) too thick, my legs are too skinny, my lip is weird (a scar from a childhood accident), and yes, my boobs are still holding me back from my true potential.”
Samantha Ponder, ESPN Sports sideline reporter, prothityone.com
GH: Yeah Sam, you are downright hideous. And how dare this a male-dominated audience for college football ogle and google your goods for their enjoyment? These worthless, creepy, couch-riding bastards who ESPN is trying to attract with your flawed bod (and a scar from childhood…sniff…sniff).

“Here’s the lie: that our worth as humans is dependent on what any other human says, does or thinks. That a hyper-sexualized culture of men addicted to the entanglement of pornography and objectification and the women trying hopelessly to please those men by altering their bodies and therefore their minds, should have any say about the true value of a human soul. Twitter (and social media in general) is a breeding ground for those lies.”
Samantha Ponder, prothityone.com
GH: Sam does not appear to have a very high opinion of her target audience…or her employer’s goal to maximize their audience. Rather than Twitter revealing these as lies, it is simply delivering information that was until know hidden. Ponder’s pouty post should infuriate her broadcasting sisters. Those who are tough enough (male or female) in the TV sports biz survive and advance. Those who are not lash out at their audience…and eventually disappear.