OTC: The Sporting News Rates Royals’ Lefebvre & Hudler As Second From The Bottom In MLB 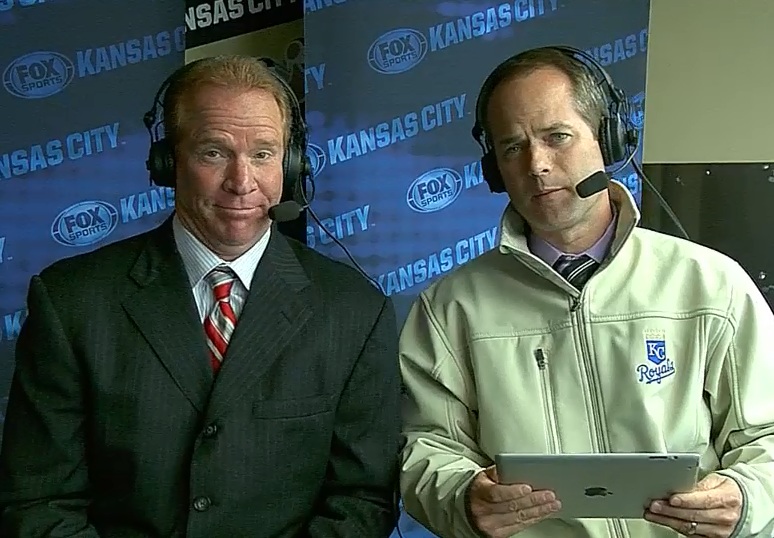 “This is some rah-rah nonsense from (Rex) Hudler…”
Jesse Spector, writer, as he evaluates the work of the Royals TV color analyst Thursday night, sportingnews.com
GH: Sporting News is critiquing the TV broadcast crews of all the MLB teams and Spector was tabbed to evaluate the Royals booth’s work Thursday night in their 11-5 10-inning loss to the Twins. It is not at all fair to randomly choose one game of the team’s 162 to evaluate any part of the organization’s work. This includes the guys broadcasting the game on Fox Sports KC. But one game is all Spector had to give and he dissected Ryan Lefebvre’s and Rex Hudler’s game in such detail he pretty much left the two mic men with their throats slashed and left to bleed out – which might improve their next broadcast. Read on.

“’He’s having a bit of a wardrobe malfunction,’ Lefebvre says, breaching one of the golden rules of baseball broadcasting: DON’T POINT OUT HOW OFTEN BALLPLAYERS (AND SOMETIMES MANAGERS) GET HANDSY IN THE CROTCHULAR AREA. It’s all the time, because in the 140-year history of jockstraps, not a single one has ever stayed in place for more than 20 minutes at a time.”
Jesse Spector, writer, sportingnews.com
GH: If this is one of the GOLDEN RULES of baseball broadcasting, I’ve somehow missed hearing about it in my 50 years of listening and watching baseball. Players and managers scratching, spitting and grabbing ass have always been fair game. What freezes broadcasters with silent fear is the shot of a buxom hottie in the stands…unless you are listening to a Brent Musburger broadcast.

“We’ve seen that Lefebvre’s basic play-by-play is lacking in quality, that Hudler’s analysis both misses the mark on the basics and wanders into off-topic nonsense at lousy times, and that the two feed into each other’s weaknesses.”
Jesse Spector, writer, sportingnews.com
GH: Spector did an excellent job fact checking comments made by Lefebvre and Hudler in an effort to refute the. He was very successful in doing so.

“Lefebvre lets the crowd noise carry Gordon around the bases, which is a good choice that a good broadcaster makes before providing some more details, like ‘Gordon takes Pressly deep, and it’s 5-5!’ Instead, Hudler bursts forth with a series of words that come into his brain, some in complete sentences, some not.”
Jesse Spector, writer, sportingnews.com
GH: For some, it only takes a few innings of Rex The Wonder Dog to get the entire bite of his commentary.

“We’ll see how Bruce navigates through this mess. But oftentimes, this is when Bruce Chen is at his best, when the other team thinks that they have him on the ropes.”
Ryan Lefebvre, as Chen loads Thursday night in a 5-5 game Thursday night in the tenth against the Twins, Fox Sports KC
GH: The overall positive tone from Lefebvre and Hudler is not unique to hometown broadcasts. The team is the broadcasters’ boss and they want a positive spin on just about everything that is discussed. Frank White learned that honest critical discussion is not welcome in the Royals booth – and likely very few other MLB booths. Paul Splittorff was the best at being able to criticize the team – sometimes harshly – and remain in the good graces of his employer.

“While Lefebvre is technically right about Chen being ‘at his best when he’s on the ropes’ this year, it’s only on a technicality, as opponents hit .333 against him with runners in scoring position, compared to .343 with the bases empty. He has a 6.46 ERA coming into this game, and it will be 7.45 in a matter of minutes. Chen is always on the ropes.”
Jesse Spector, writer, sportingnews.com
GH: How great would it be if the Royals employed a guy to correct all of Beav’s and Hud’s comments much like the guy who does the same for ESPN’s Pardon The Interruption? There wouldn’t be enough time between innings to cover the verbal boots.

“Just got to finesse a way. Find a way. Infielders at double play depth. Bruce has induced four ground ball double plays this year in his short outings. He gets a lot of pop-ups from right-handers. With that off-speed pitch, they get out in front, and get frustrated that the bat head lags behind.”
Rex Hudler, as he sent positive wishes toward Chen in the top of the tenth, Fox Sports KC
GH: Spector grabs Hud’s comments and levels them with facts. Read on…

“Now, about those four double plays that Chen has induced. That’s in 50 opponent plate appearances to this point with a runner on first base and less than two outs, including one bases loaded situation. That’s an 8% double play rate, while the major league average is 10.7%. Exactly what Hudler is talking about when it comes to right-handed hitters is a complete mystery – they have a .968 OPS against him this year, compared to .770 for lefty hitters. Jose Abreu leads the majors this year with a .969 OPS, so basically, when Chen is on the mound, every right-handed batter he faces is transformed into the best hitter in baseball.”
Jesse Spector, writer, sportingnews.com
GH: Below are TSN’s rankings of MLB’s TV crews up to this point in the season (with eight MLB teams yet to be critiqued). The Royals crew is second from the last. Well, at least the baseball has been watchable this season.

18 Responses to OTC: The Sporting News Rates Royals’ Lefebvre & Hudler As Second From The Bottom In MLB