“I want to see Andrew Wiggins have a great game at home tonight. He’s has some great games on the road but he’s struggled at times here at home. Scoring only three points against Oklahoma State…”
Greg Gurley, KU radio analyst, prior to Kansas/Iowa State game Wednesday night where Wiggins scored 29, Jayhawk Radio Network

“I think it’s time we all came to agreement that Andrew Wiggins wasn’t vastly overrated by some/many coming out of high school.”
Evan Daniels, @EvanDaniels, basketball recruiting analyst for Scout.com, following Wiggins’ second straight career-high scoring game where he scored 27 and 29 against TCU and ISU respectively, Twitter
GH: Wiggins’ has been the focus of many college experts and armchairs ever since he named Kansas as his school of choice to spend his lone college season. His GQ spread and his photo on the cover of SI comparing him to KU legends Wilt and Danny catapulted him to receive immediate scorn from KU detractors and love from his Crimson and Blue fans. His recent play received some play on Twitter Wednesday night when some CBB experts went at each other for their pro and con takes on Wiggins. Read on.

“To me Andrew Wiggins has been all that I expected him to be. In terms of living up to the hype, that’s not possible.”
Henry Lake, 610 AM
GH: Could Wiggins have lived up to the hype? Sure. Carmelo did it at Syracuse. And he just might yet. 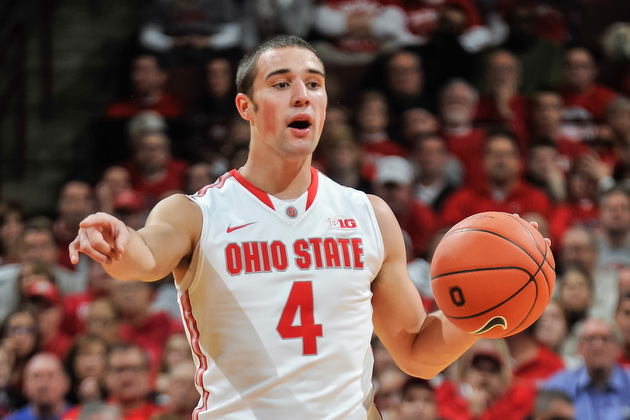 “Question of Day: Who would you rather have for THIS college season? Andrew Wiggins or Aaron Craft. @DickieV @SeanFarnham @franfraschilla”
Jeff Goodman, @GoodmanESPN, in a tweet earlier this month, Twitter
GH: Goodman is very high on the rosy-cheeked Ohio State guard and not-quite-so-high on KU’s freshman forward. He quickly turned to Twitter to defend his choice of Craft over Wiggins. Read on.

“For this season? Craft. … I don’t care about the stats. Craft is superior defender, runs his team and is a terrific leader.”
Jeff Goodman, @GoodmanESPN, Twitter
GH: I would agree with Goodman on all of those attributes he says Craft possesses. But what expert, analysts or writer would say, “I don’t care about the stats?” One who knows the stats do not support their argument. (And one who might not be smart enough to be making the argument.)

“Remember that time, after like four games, when you quoted an NBA scout saying there’s ‘no chance’ Andrew Wiggins goes No. 1?”
Gary Parrish, @GaryParrishCBS, in a tweet to Jeff Goodman at ESPN, Twitter
GH: Parrish works for CBS and Goodman works for ESPN. I have no idea if they are friends, rivals or friendly rivals. But their Twitter conversation last night regarding Wiggins came off as deliciously snarky.

“Remember that time you said Wiggins is a lock to go No. 1?”
Jeff Goodman, @GoodmanESPN, in response to Gary Parrish’s tweet, Twitter

“Remember that time you said you’d take Aaron Craft over Andrew Wiggins? (It was like five days ago.)”
Gary Parrish, @GaryParrishCBS, in a tweet to Jeff Goodman at ESPN, Twitter
GH: Oh how I wish Danny Clinkscale would take notice of this banter and liven up Kevin Kietzman’s four-hour show with some intelligent and even digging counterpoints. KK’s afternoons are too often him mowing over everything in his path with a polite escort at his side.

“But those that compared Wiggins to LeBron should be sued for journalistic malpractice. THAT was unfair.”
Fran Fraschilla, @franfraschilla, who was responding to Daniels’ tweet above, Twitter

“No one who covered talent or college basketball seriously compared LBJ to AW.”
Michael DeCourcy, @tsnmike, responding to Fraschilla’s above tweet, Twitter

“I thought Oden was the best since LBJ, but I’ve been an advocate of AW’s potential.”
Michael DeCourcy, @tsnmike, Twitter
GH: I think Joel Embiid is better than Oden was in college and even better than Wiggins. Kansas has two perennial NBA All-Stars on their roster this season. If they don’t win it all this April, they should come damn close.

“The Big Ten is the best conference in basketball from top to bottom. Not sure it’s really all that close.”
Jeff Rabjohns, @JeffRabjohns, covering Indiana hoops and columnist for Basketball Times, Twitter
GH: Robjohns might be a bit too close to Hoosier country to be making this declaration. I think his logic has been tainted by dreams of Jimmy Chitwood. With Wisconsin losing at home to Northwestern and Ohio State losing to just about everybody nowadays, the B1G looks deeper but not better.

“Death. Taxes. Kansas wins the Big 12 under Bill Self.”
Jon Rothstein, @JonRothstein, after Kansas ran their Big 12 conference record to 7-0 following their 92-81 win over Iowa State, Twitter
GH: Kansas now stands 16-4 overall but has a two-game lead over Oklahoma and Texas in the Big 12 race. Four other Big 12 teams also have only four overall losses. ISU is ranked 15-4 and 16th in the country but has a 3-4 conference mark. Kevin Kietzman might be poo-pooing the strength of the Big 12 this season but I am starting to think it is as good as the Big Ten and maybe better.

“Hearing there are still student tickets (at Mizzou Arena) left for Saturday vs. Kentucky. That is terrible.”
Brian McGannon, @BrianMcGannon, Twitter
GH: Are Mizzou fans going to pack The Norm for Frank Haith’s team’s biggest home game of the season? I would like to think so but filling that barn has been anything but routine the past few years.

“They win that game that just changes everything. That changes the whole way you look at this season.”
Nate Bukaty, on Mizzou playing Kentucky this Saturday in Columbia at noon, 810 AM

“Like I said; you can’t get me to go to Columbia, Missouri without paying me.”
Jake Gutierrez, a Kansas native and avowed Jayhawks fan, who will be working the Kentucky/Mizzou game for CBS, 810 AM

“Missouri President Tim Wolfe spoke personally Wednesday about Sasha Menu Courey’s 2011 death, noting that his own daughter is a first-year college athlete. He told reporters that ‘one of our students is dead. And I don’t want to feel that anymore.’”
HuffingtonPost.com
GH: This is the kind of response and attitude that was missing from Mizzou’s first public responses to ESPN’s Outside the Lines report. Mizzou came off too defensive and analytical in my opinion. Wolfe’s words here are what a parent and a state expects.

“If we don’t win the (American League) Central, it’s basically a letdown. We’ve added to a team that finished 10 games over .500. And we’re expected to compete in the Central and get a playoff berth. The city’s waited a long time for it, and we added to a team that had success last year. There’s only one way to meet the expectations on that, and we understand that.”
Billy Butler, Kansas City Star
GH: The Royals pitchers and catchers report to Surprise, AZ February 14th or two weeks from tomorrow.

“I look at it in terms of team goals, but you look that the top six, with Sal in the six hole, I’d stack that up with anybody on paper. On paper means nothing, but you can compete with anybody with that lineup.”
Billy Butler, Kansas City Star
GH: That kind of talk has me smelling leather and neatsfoot oil. Or is my wife trying to cook Italian again?