OTC: Will Super Bowl Empty In A NY Minute Becasue Of The Cold? / Toma At SB 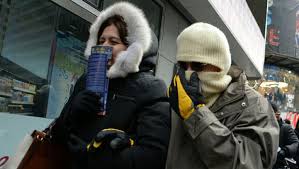 “Extraordinarily pungent smell of pee on my train. Even the bums are stepping up their urine game for Super Bowl week!”
Damon Amendolara, @DAonCBS, who covering the Super Bowl is broadcasting from NYC this week on radio row, Twitter

“The weather’s going to be a problem. They made a big mistake. The game shouldn’t be there. I mean, it’s stupid. First of all, it’s not fair to the players. It’s not going to be fair to the fans. It’s not going to be that enjoyable”
Mike Ditka, on the Super Bowl being played outdoors in the New York area this Sunday, Detroit Free Press
GH: The weather forecast for the NYC area has improved a bit with the kick-off temp predicted to be in the 30s. But with a 6:30 PM (ET) kick-off, you know temps will be dropping fast. My question is what is the cold tolerance level of the corporate big wigs who can afford those $3,000 seats? That stadium could look pretty empty by the time the third quarter kicks off.

“It’s so cold University of Michigan will close Tuesday. First time since 1978.”
Jeff Vaughn, @JeffVaughn, Twitter
GH: When the Big Ten schools start closing because of the cold, you know that Polar Vortex thingy is real! I still think Bo Schembechler would of made it to class. One of my favorite Bo quotes is now a slogan of the Wolverines, “Those who stay will be champions.” Bo made this promise to his football team when he took over the head coaching job at Michigan in 1969. Only 75 players survived his first training camp from the 140 who began Bo’s first camp. Another favorite quote from Bo had to do with the Michigan basketball team after Bill Frieder accepted the Arizona State job just prior to the start of the NCAA tournament in 1989. “A Michigan man will coach Michigan!” Bo declared in naming assistant coach Steve Fisher the head coach for the tourney.

“I’m off to New York Wednesday to cover some big Kansas City angles for Super Bowl week in NYC. Too bad the Chiefs couldn’t make the trip this year, too! Would love to see you in New York if you’re going!”
Matt Flener, @MattFlenerKMBC, TV reporter for Channel 9, Twitter
GH: Give Flener a follow on Twitter and check out his tweets from New York.

“Floyd Mayweather is betting $10.4M that the Denver Broncos will win the Super Bowl.”
Sports Update, @MySportsUpdate, Twitter
GH: Floyd may have taken too many shots to the head. Maybe Floyd should get in touch with Vince Young for a talk.

“It could be a mud bowl or a snow bowl but we’re ready. We can’t fight the weather. But we can be prepared. … We love pressure. When things get tough, we start to work. … My first job is to give the players the best possible conditions to perform on. The cheapest insurance for a football player is a good, safe playing field. And for the fans on the stands and watching on TV, we want to give them a field of beauty.”
George Toma, head groundskeeper for all 48 Super Bowls, Kansas City Star
GH: Kudos to Randy Covitz who wrote the story on the 85-year-old Toma for The Star. Toma is a Kansas City sports icon that somehow is still doing what he does best – making grass grow. Read on.

“Having George on site instills confidence that the game-day field and practice fields will be in top condition for our Super Bowl teams. The league, teams and coaches trust his experience and expertise. George has earned his place in Super Bowl history.”
Frank Supovitz, NFL’s senior vice president of events, Kansas City Star
GH: Covitz mentioned that Toma plans to do at least two more Super Bowls to give him 50. Wow.

“You do the job … and then some,” Toma said of his mantra. “That distinguishes the mediocre from the great. We want everything perfect. If it’s not perfect, we’re not doing our job.”
George Toma, Kansas City Star
GH: Toma was one of the best reasons to get a box seat at Royals Stadium. When our boys were just toddlers, Toma would pop up from the field during a game and place a piece of bubble gum on the rail of the box for the boys. He’d line them up until there were a half-dozen pieces for the boys to grab. He rarely said a word. Just a smile and some gum.

“I think college basketball would take a much bigger hit if there wasn’t the fan allegiance (to the schools) than any other sport. I think college basketball would be hurt more than any other sport (if you removed fan allegiance to one team) because the product really isn’t that good.”
Danny Parkins, 610 AM
GH: Parkins is a Chicago kid who loves the NBA. Michael Jordan’s greatness and the years Parkins spent of Jim Boeheim’s zone at Syracuse must have spoiled him from enjoying the nuances of college hoops.

“Mid-level college basketball is not enjoyable at all.”
Carrington Harrison, who agreed with Parkins in that the talent level of college hoops is too poor once you get below the big-school teams, 610 AM
GH: So The Drive Guys are basketball snobs? William Jewell hoops is a bad look? High school basketball isn’t entertaining? These two sound like Whitlock discussing a McRib!

17 Responses to OTC: Will Super Bowl Empty In A NY Minute Becasue Of The Cold? / Toma At SB